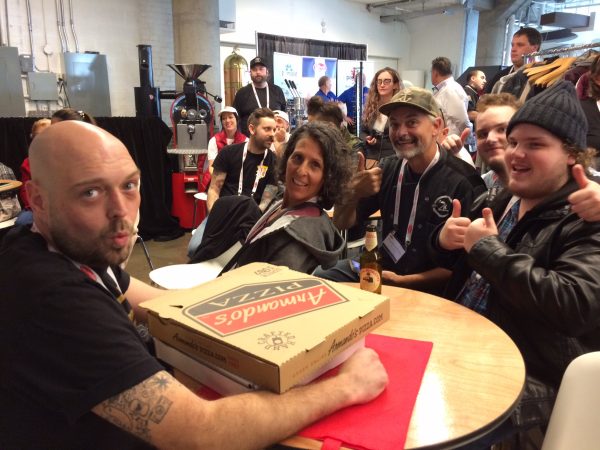 Oct. 23, 2019, Toronto – Canada’s top pizza makers were named at the Canadian Pizza Summit and Chef of the Year Competitions on Oct. 21.

Santo and Casale each receive a trip to Las Vegas to compete in the International Pizza Challenge in March 2020 and $500.

Michele Casale receives his award for Chef of the Year (Open) from Joe Di Donato, vice-president of operations at Faema Canada.

James Timothy, Jocelyn Morwood-DeGroot, Wayne DeGroot and the team at Zen’Za Pizzeria in London, Ont., enjoy the atmosphere following Timothy’s recapture of his title as winner of the Great Pizza Box Fold-Off.

Rodolfo Santo accepts his award for Canadian Pizza Chef of the Year (Traditional) from Joe Di Donato, vice-president of operations at Faema Canada.

Judges for the event were Joe Leroux, owner of Amadio’s Pizza in Port Credit, Ont.; Tom Stankiewicz, owner of Bondi’s Pizza in London, Ont.; Diana Cline, partner in Diana’s Cucina and Lounge in Winnipeg; and John Chetti, managing partner in Queen Margherita Pizzeria and FBI Pizza in Toronto. Cline, Stankiewicz and Leroux are former holders of the Chef of the Year title. Judging the new Mystery Ingredient Challenge were Marina Rondinelli, chef, consultant and former owner of Rondo’s Pizza Plus in Bright’s Grove, Ont.; Giorgio Taverniti, owner of Frank’s Pizza House in Toronto; and pizza historian Alex Hughes, of York University, who is completing his PhD on the pizza industry in Toronto and Buffalo, N.Y.

The Canadian Pizza Summit and Chef of the Year Competitions are brought to you by Canadian Pizza magazine with support from Platinum sponsor Moretti Forni, distributed by Faema Canada; Gold Plus sponsor Parmalat/Galbani; Gold sponsors Ardent Mills and Stanislaus Food Products, Bronze sponsor Uber Eats, attendee bag sponsor MenuSano and lanyard sponsor Lallemand Baking. Our sponsors will be part of a trade show along with other pizza-focused suppliers.

Canadian Pizza would like to thank Faema Canada/Moretti Forni Ovens for hosting the event at their showroom in a renovated Ford plant in Toronto, and head chef Michael Bou-Younes and staff for helping facilitate the day’s events.

Canadian Pizza magazine has been hosting the annual trade event since 2014 and has crowned Chefs of the Year since 2005. The magazine provides the Canadian pizza industry as a whole with a responsible trade journal that delivers the latest information on market trends, research, innovations, new products and current events. It is designed to serve as a link to unite each sector of the industry, from retail to wholesale to allied businesses through a broad range of communication methods. Canadian Pizza magazine is published by Annex Business Media.