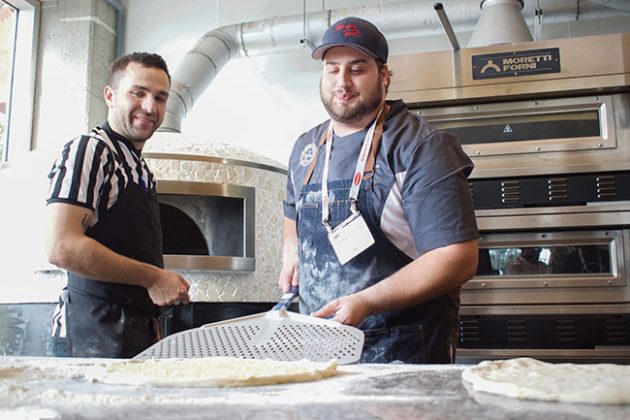 Thomas Schneider bakes his Spicy Honey pizza, which was awarded second place in the Open category of Canadian Pizza Chef of the Year 2019 Photo: Canadian Pizza.

I made the best version of my pizza ever,” was a comment we were happy to hear from many Chef of the Year competitors in October.

This year we focused squarely on the competitions, making for an exciting day.

Santo and Casale each receive a trip to Las Vegas to compete in the International Pizza Challenge in March 2020 and $500.

In answer to requests to hold a fun competition along the lines of Chopped Canada. Our answer was the Mystery Ingredient Challenge! Three brave and creative chefs stepped up to create signature pizzas in our first challenge: Seth Drogemuller of Zen’Za Pizzeria in London, Ont.; Dean Litster, owner and partner in Armando’s Pizza in Windsor, Ont.; and Jason Seitanidis, owner of Matador Pizza and Steakhouse in Calgary. They had 45 minutes to plan, prepare, bake and present a pizza that featured the Mystery Ingredient. They chose from a list of ingredients shared two weeks’ earlier and provided by organizers. Bases included tomato sauce, barbecue sauce and mustard; cheeses included mozzarella, ricotta and cheddar; meats included bacon and mortadella; as well as a selection of vegetables and seasonings. The Mystery Ingredient was dill and garlic pickled green beans. The Pork and Pickley Beans Pizza, created by Dean Litster, owner and corporate chef at Armando’s Pizza in Windsor, Ont., was deemed the favourite. Litster, our 2019 Chef of the Year (Open), said he was pleased when he learned the secret ingredient as it fit in with his plans for his pizza. Participants were given a list of about 20 ingredients to mull over two weeks before the competition. They worked from a communal table of ingredients provided for them by the show.

Participants took turns folding 10 boxes while they were timed by Canadian Pizza and heartily cheered on by attendees. James Timothy of Zen’Za Pizzeria in London, Ont., defended his title as winner of the Great Pizza Box Fold-Off. Timothy folded 10 large boxes in 42.55 seconds, besting his time last year of one minute, 3.7 seconds.

Raj Sivasothy of The Good Son in Toronto carefully cuts into his steamy, hot Salame Piccante Pizza during the Traditional division.

Jason Pizzolongo, owner of Restaurant Fuoco in Varennes, Que., displays the Bufala, which earned him second place in Traditional.

Marco Caveglia of Tuscan Wolf Pizzeria in Whitby, Ont., made a pizza using a double dough filled with stracchino cheese.

Judges for the event were Joe Leroux, owner of Amadio’s Pizza in Port Credit, Ont.; Tom Stankiewicz, owner of Bondi’s Pizza in London, Ont.; Diana Cline, partner in Diana’s Cucina and Lounge in Winnipeg; and John Chetti, managing partner in Queen Margherita Pizzeria and FBI Pizza in Toronto. Cline, Stankiewicz and Leroux are former holders of the Chef of the Year title. Judging the new Mystery Ingredient Challenge were Marina Rondinelli, chef, consultant and former owner of Rondo’s Pizza Plus in Bright’s Grove, Ont.; Giorgio Taverniti, owner of Frank’s Pizza House in Toronto; and pizza historian Alex Hughes, of York University, who is completing his PhD on the pizza industry in Toronto and Buffalo, N.Y.

More than ever, this event was a family affair, with several families and colleagues attending and competing. The Lorefices, who run Trecce in Toronto, brought their team, and Nina and Lucy competed in separate divisions, with Sabrina and Lucy participating in the Great Pizza Box Fold-Off. Zen’Za Pizzeria out of London, Ont., were there in full force, with co-owner Wayne de Groot opening minds with his vegan version of Philly ’za and team member Seth Drogemuller competing in the Mystery Ingredient Challenge. Josh and Jeremy Paone, the entrepreneurial brothers behind The Lock pizzeria in Port Colborne, Ont., competed in separate divisions, while Angela Risi and her husband Doug George of Maria’s Pizza West in Brantford, Ont., boldly competed in the Traditional division.

Attendees were glued to the action like wet pizza dough stuck to a cutting board, taking photos and cheering them on. A few bursts of applause followed particularly interesting and impressive-looking pizzas. If you took a good photo of the chefs at work, please share it with Canadian Pizza and we may include it in an online photo gallery on Facebook, a post on Instagram or in future coverage in the magazine. Watch the magazine and website for details of next year’s Canadian Pizza Summit and Chef of the Year Competitions, sign up for our enewsletter to keep up to date and follow us on Facebook, Twitter and Instagram (canadian_pizza_magazine). Tag us (@CdnPizzaMag) in your photos posted online or send photos to the editor at ccross@annexbusinessmedia.com

On the Sunday before the Summit, a “Night Before Napoletana” pizza class was led by Michael Bou-Younes, Faema Culinary Academy’s head instructor. Bou-Younes talked about the unique tradition of pizza coming out of Naples, demonstrated traditional techniques and allowed participants to take a turn at opening, stretching and sampling the results. The class was sponsored by Parmala/Galbani and featured a demonstration of the company’s Professionale cheese by chef Daniele Uccheddu.

Exhibitors provided information on a variety of products and services designed with restaurants and pizzerias in mind:

The Canadian Pizza Summit and Chef of the Year Competitions are brought to you by Canadian Pizza magazine with support from Platinum sponsor Moretti Forni, distributed by Faema Canada; Gold Plus sponsor Parmalat/Galbani; Gold sponsors Ardent Mills and Stanislaus Food Products, Bronze sponsor Uber Eats, attendee bag sponsor MenuSano and lanyard sponsor Lallemand Baking. Our sponsors will be part of a trade show along with other pizza-focused suppliers.

Canadian Pizza would like to thank Faema Canada for hosting the event at their showroom in a renovated Ford plant in Toronto, and head chef Michael Bou-Younes and staff for helping facilitate the day’s events. Special thanks go also to Parmalat/Galbani for donating a prize of its Professionale cheese to the Mystery Ingredient Challenge winner; and to Sabrina Foods for donating two prizes of arugula-spiced cheese to the two top chefs.

Look for a gallery of pizza chefs and profiles of the Chefs of the Year in 2020 editions. •