The world is your larder: foraging for food 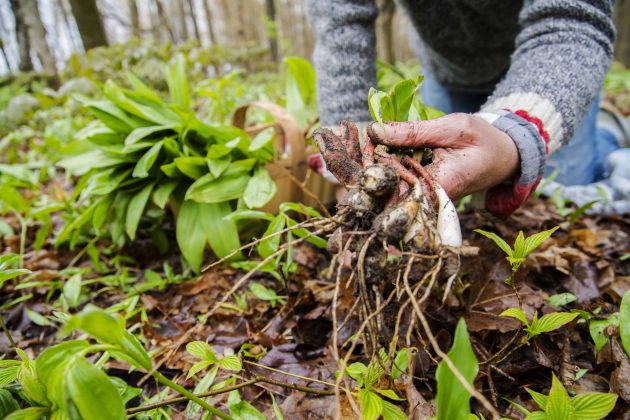 A woman foraging in the woods for wild leeks, also called ramps, or wild onions. Cutline: It’s best to gain experience foraging with experts who know which items are safe and flavourful to consume, and, just as importantly, how to protect the habitat for future seasons.Photo credit: Getty Images

Many chefs embrace fresh, local food. Some chefs, however, go that extra mile by foraging for their produce in the woods, fields and wetlands just outside their doors. It doesn’t get any fresher or more local than that.

Canada’s beautiful wilderness, these will assure you, isn’t just a feast for the eyes, but one for the tummy as well.

Shawn Dawson is passionate about foraging and makes a living by gathering foodstuffs from the Newfoundland wilds. He sell foraged products to local chefs and restaurants in St. John’s and surrounding areas and sells them at the local farmers market. He also hosts workshops.

“I’ve been foraging for as long as I can remember,” Dawson explains. “I’ve been picking berries with my Nan since I was a young boy, and my brother and I spent a lot of time harvesting mussels, berries, plums and damsons on the southern shore when visiting our Nan’s. It just appeals to me – the health benefits, the sense of satisfaction that comes from cooking with the things I’ve personally harvested, spending every day in the woods, educating people about sustainably harvesting wild foods.”

While Canada’s natural larder is a forager’s paradise, it’s important that one use these resources safely and responsibly. It’s best to gain experience foraging with experts who know which items are safe and flavourful to consume, and, just as importantly, how to protect the habitat for future seasons.

While foraging takes knowledge, there are some plants that are so distinctive as to be easily harvested by anyone – and they taste great to boot!

Milkweed is found in fields and along roadsides throughout Canada. They’re often considered a weed. But don’t remove them. Not only is milkweed the primary food of the monarch butterfly, but you can also harvest the pods for your own enjoyment. Milkweed pods can be picked when they are young and tender, up to about two inches long. Larger pods contain more of the plant’s bitter milky sap. Make sure to remove any stems from the pods, then preserve them in cider vinegar and spices as you would a pickle.

Also known as Wild Japanese Asparagus, Japanese Knotweed is highly invasive. Why not keep it in check by harvesting its stalks in spring? Japanese Knotweed predominantly grows in disturbed soil, along the edges of fields and wet areas. It appears late in April and, when young, does indeed look a lot like asparagus, with hollow stalks covered in reddish-maroon speckles. In terms of flavour, however, it is closer to rhubarb – tart and sweet.

Harvest the stalks after they’ve grown at least six inches tall. You have only about a month to harvest them: once the stalks have become fibrous and are no longer tender or edible. Trim the leaves and lightly sauté for three to five minutes, top with butter and salt and serve as a side. Japanese Knotweed stalks also can be added to soups, salads and omelettes.

Among the most popular of wild edibles is the ramp, a plant chef Everett Bell – currently the manager of Parry Sound’s Log Cabin Inn – knows very well. During his time as executive chef at Sherwood Inn, he would harvest them from the wooded hillside steps from the resort’s door. “Ramps (or wild leeks) are highly sought after by chefs because they have such a unique flavour,” Bell explains. “They have a sweet, onion and garlic flavour. I use the leaves in salad or churned into butter to give it an oniony flavour.”

Wild leeks sprout up in late April and early May in eastern wetlands; they are usually one of the first things you see sprouting in the forest landscape and are easy to identify with their red-based stem. “You have to be very sparing in picking them because they won’t grow back,” Bell cautions. “I strongly recommend just harvesting the flavourful leaves.”

While many people are understandably hesitant about eating unknown wild berries, as a general rule most compound berries (those consisting of a tight cluster of smaller parts) are edible. Go beyond raspberries and wild strawberries. Easily confused for raspberries, thimbleberries have a unique taste all their own. They grow on a non-spiny, upright shrub with big, fuzzy maple-shaped leaves and white flowers. The red berries are seedy and tart, but taste great raw or as a preserve.

Canada is home to countless species of mushrooms. Some are delicious, some dangerous. Also keep in mind that fungi have a symbiotic relationship with trees – covering their roots with web-like mycelium that provides minerals and water in return for starches – so removing them en masse can upset this critical balance.

“I harvest a lot of mushrooms but you really need to know what you’re looking for because there’s a lot more that can make you really sick than there are ones you can eat,” Dawson explains. “Going out with an experienced picker is the best way to get comfortable with harvesting mushrooms.”

Indeed, that’s the best way to begin foraging except for all but the easiest to identify plants. But once you become knowledgeable, the world becomes your larder. When it’s time to do some shopping you’ll simply grab a knife and bucket, pull on your boots, and head off into the woods and fields.

That’s as fresh and local as you can get.