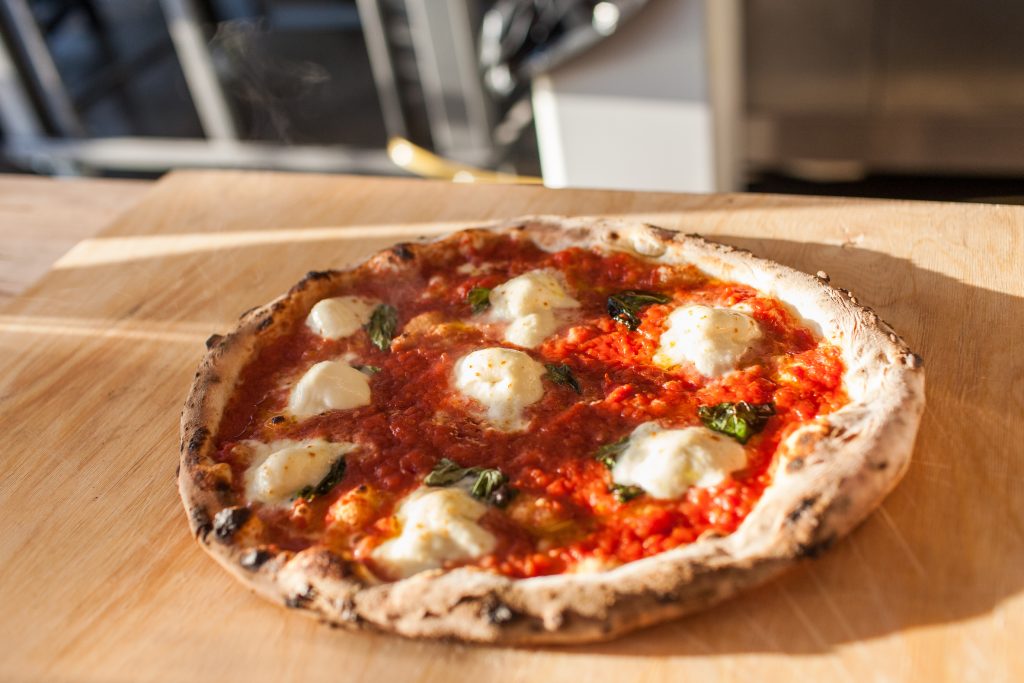 Note the leoparding on the crust, a characteristic of the style. (Photo by Jack Liu, photographer for Galbani Professionale)

Several attendees of the Canadian Pizza Summit attended a pre-Summit class on how to make the classic pizza style led by the head instructor at Faema Culinary Academy.

During the hands-on session, sponsored by Parmalat Canada, operators and chefs focused on the science, technique and essence of making the popular pizza style that originated in Naples.

Instructor Michael Bou-Younes began his culinary journey in his grandmother’s backyard as a child during summers in Lebanon. Back in Canada, he honed his pizza-making skills at a classic Italian pizzeria and worked in busy kitchens to learn the fundamentals. He was regional chef di cucina at Pizzeria Libretto from 2012 to 2018.

Bou-Younes started with an explanation of the theoretical science of Napoletana pizza making. Participants were given starters more than seven years old to feed during the class and take home for later experimentation.

He explained that double-zero flour is the preferred flour for this style because of its high protein content – typically about 13 per cent. The dough, after fermenting for a long period of time, becomes strong and elastic due to the use of double-zero flour.

Although Napoletana pizza is often quite soft, the chef said, experience has taught him that “people like pizza to have a little ‘shatter’ when they bite into a slice.”

Chef Michael Bou-Younes, of Faema Culinary Academy, led a class full of chefs and operators through the science and art of Napoletana.

We started with a seven-and-a-half-year-old mother dough.

The class was an informal chance for operators to network and compare notes.

Note the leoparding on the crust, a characteristic of the style. (Photo by Jack Liu, photographer for Galbani Professionale)

Crust aeration, another trait of a good Napoletana pizza, is put to the test.

After considering the science of dough making, students tried their hand at mixing, kneading, stretching, topping and baking the pizza in an electric deck oven and a domed gas oven.

To get your pizza into the oven, Bou-Younes recommended a sliding technique using a perforated metal peel. Try lifting the pizza a little at the edge then sliding the peel under it, he said. Sprinkling flour on the peel can help prevent sticking.

The instructor said pizzaioli need to be active. There is a lot of subtlety involved in the process and in knowing how and when to lift the pizza up in the oven to get that final caramelization.

Napoletana pizza is characterized by evenly distributed amounts of char or burn on the crust, Bou-Younes said, and toppings should be adequately cooked in correlation to the rise of the dough. This can be achieved, he added, by exposing all parts of the pizza equally to the flame throughout cooking process. Cheese should caramelize rather than simply melt.

Bou-Younes described the theory behind “leopard spots” or “leoparding” on the bottom of the crust, explaining that the ideal textured sear on the bottom of dough should be evenly distributed across edges and middle – not too clustered but rather spotted throughout. A clean, hot stone can help ensure direct, even contact across the entire base of the pizza, he said.

Other characteristics of the style include blistering and rise near the crust and aeration through the crumb and the middle of the pizza.

Finally, when pinched in the centre, a slice should sag toward the middle point, Bou-Younes said, and thickness should not exceed three centimetres through the middle of the pizza.

The complimentary class was open to pizzeria operators and their staff on a first come, first served basis.

Chef Daniele Uccheddu, of sponsor Parmalat Canada, talked about the company’s Galbani Professionale mozzarella and demonstrated how to combine the cheese with traditional ingredients like marinara sauce and nduja sausage to make a classic Napoletana pizza.

Uccheddu grew up in Torino, Italy. A trained pizzaiolo, he started his career in pizza 15 years ago and is currently a chef at Johnny Rocco’s in St. Catharines, Ont.

Participants had plenty of opportunity to ask questions and sample the pizza before and after the class.

Thanks go to Faema Culinary Academy and Parmalat Canada for making this fun, instructional evening possible.