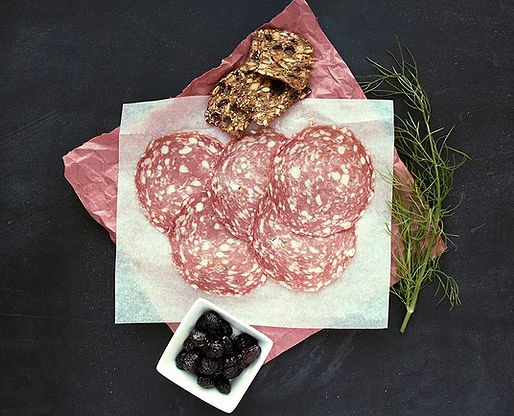 A Canada-Italy partnership is bringing high-quality dry-cured salami, cooked and cured meats made in the Italian style to Canadian restaurants and grocery stores.

Soleterra d’Italia produces dry cured salami and cooked meats (Italian-style ham) in its Acme, Alta., facility. The plant is owned and operated by the Price family using authentic Italian recipes from the Simonini family of Modena, Italy. They also import cured meats such as prosciutto, speck, coppa, mortadella and pancetta arrotolata (loosely translated as “rolled up”) from partner plants in Modena, owned and operated by the Simonini family for near 100 years.

The partnership began in 2016 between Sunterra Meats, part of the Prices’ family-run food company with farming, processing and retail operations. In 2018, Soleterra d’Italia built a new facility near Acme and began producing authentic Simonini family recipes using Sunterra Farms pork. This allows products made at the Acme facility to be traceable back to the farm of origin. The Canadian and Italian plants use the same equipment to produce their meat products.

“The sliced prosciutto is aged for 12 months using only three ingredients – ham, salt and time (not thyme),” said Sheldon Connors, accounts manager for Western Canada, who was reached at the virtual RC Show early in March.

The salami is available in six unique flavours such as Contadino (peppercorn) and Tartufo (black truffle). It is fermented and dry cured, which gives it texture and taste.

New from the company are salami sticks in such flavours as Calabrese Piccante, featuring chili peppers and paprika, and Finocchio, featuring fennel. These and other flavours are available in several formats for convenience and, being shelf stable, do not require refrigeration.

The Alberta plant, producing since 2018, is federally Inspected, HAACP-certified and GFSI (BRC)-accredited. Soleterra Italia produces both branded and private-label products for food service and retail.

Connor and Kelly Fron, his sales colleague in Eastern Canada, are available to help operators with their needs.

Related
Piller’s has new dry, cured charcuterie meats
Tasting event to highlight ‘Made in Italy’ products
‘Made in Italy’ campaign drives awareness of authentic Italian foods
A taste of Italy