Features In the Kitchen Ingredients
A taste of Italy

What is special about designated food products? A November event at Toronto’s Centennial College explored that question. 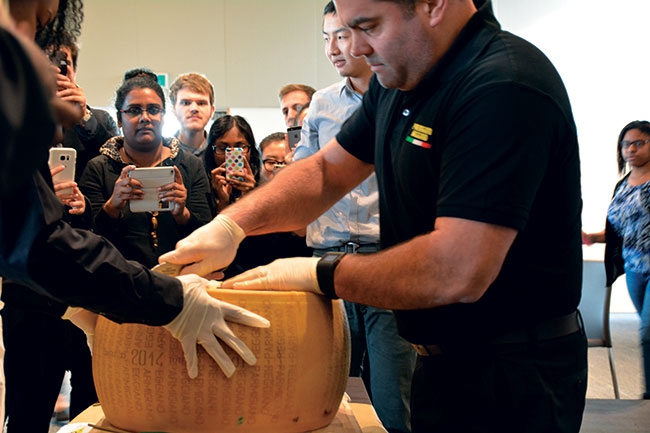 The Italian Chamber of Commerce of Ontario and Centennial College joined forces in November to showcase designated Italian foods by holding a week of chef workshops kicked off by a one-day food symposium.

A roomful of students, sponsors and food industry people were treated to a panel discussion, a lively Q-and-A with Toronto chef Rob Gentile, a display of Italian-origin products and demonstration sessions run by Italian chefs.

A panel of industry players from all stages of the food chain discussed what designated products mean to them. Products of origin usually contain six or fewer ingredients, and may include fruits, vegetables, cereals, cured meats, olive oils and cheeses that come from very specific regions, said panel host Mark Cirillo of CucinaTO online magazine.

Corrado Paina, executive director of the ICCO, said Italy’s $7-billion per year industry is doing especially well in the areas of wine, oils and machinery, which includes food processing and packaging. Paina said there has been a revolution and food is now about lifestyle.

Pat Pelliccione, president of food distributor Jan K. Overweel of Woodbridge, Ont., said the government is very restrictive and wants to go to the producers and sales consortiums have committed themselves to high standards. Pelliccione cited several foods that have increased in popularity in the last five years, among them Asiago , Fontina, , truffle-based cheeses, infused oils, specialty balsamic vinegars and creams, and spelt products.

Alison Iannarelli, executive chef at Centennial College, grew up watching her nonna make gnocchi and pasta. Every ingredient has a story, she said, and her goal is always to bring back the story and meld it with Canadian cuisine. “In Canada we have beautiful products,” Iannarelli said.

Afram Pristine, who with his brothers runs The Cheese Boutique in Toronto, a business his parents established, is a third-generation Canadian with ties to Naples and Albania. Designated products are all about having respect for ingredients, Pristine said, which is a quality he tries to instil in his staff.

Gentile said his parents came from Abruzzo in 1956 and bought a large property in Toronto that these days would be considered a farm. It had to be large enough to raise animals, he said, adding, “We had every possible fruit growing.”

He remembers the smell of the traditional food and especially his favourite dish, pasta. As a child, Gentile loved pecorino, which he described as a “funky piece of cheese.” He learned about origin designations when he went to Italy for the first time at age 28 before opening Buca. He didn’t know what balsamic vinegar was, he said, and spent two months researching regional foods. Curious about nduja sausage, he made the mistake of asking for it while in a region where it is not normally found. He was teased and pointed in the right direction.

Extra virgin olive oil is near and dear to Gentile’s heart. “There are five times more varietals of olive than of grape,” he said, adding that he often uses olive oil for finishing a dish. Concerned about adulteration of olive oil and balsamic vinegar, he tries to do his part to promote authenticity by promoting a connection between the food, the chef and the customer.

“I look for food that is taken care of by a person,” he said. Gentile recommended that purchasers ask questions until suppliers are forced to give an answer. An audience member wanted to know how to identify a quality ingredient. Gentile used the example of olive oil, which he said should name a cultivar, give a date of bottling and provide a producer’s name. However, you can bypass those criteria if it has a DOP stamp.

In a well-attended afternoon session, Giovanna Varricchione and Joe Vacca from Jan K. Overweel delivered a presentation on the properties of and requirements for designated Parmigiano Reggiano cheese.

Some 600 factories produce Parmigiano Reggiano and some make as few as five wheels each day, Varricchione said. The designations DOP or DPO mean the product is controlled for consistency. You can control the process but not the taste, she said, because cows eat grass in the summer and hay in the winter. However, an authentic cheese will be consistent over several seasons. If milked in the fall, the cows yield a drier cheese; if milked in winter, they yield a sweeter and fruitier cheese. Producers have to flip the wheels manually every day, the creation of a 38-kilogram wheel can be a two-year process.