Chef of the Year: Rodolfo Santo 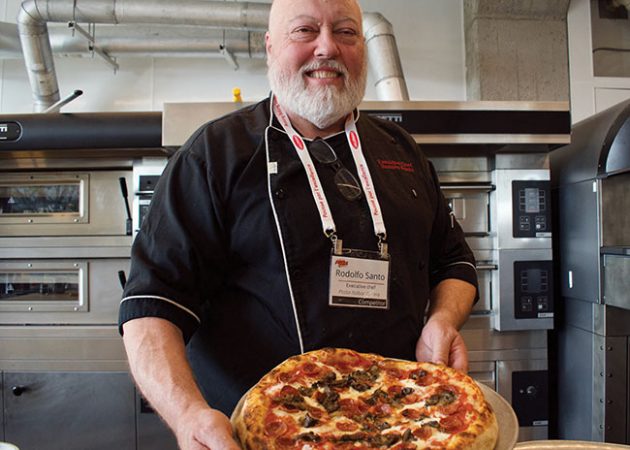 “Music and food are the same to me,” says Rodolfo Santo, our Chef of the Year, Traditional division. “If I can make the audience understand what I’m trying to say, then I’m doing something right.”

Rodolfo Santo is a bit of a mystery. On one hand our Chef of the Year – Traditional is a food scientist obsessed with testing his recipes to achieve the perfect result that will satisfy his sensitive palate. On the other hand he is an artist determined to put his stamp on each dish he makes.

One thing is for sure: he comes to life talking about the craft of pizza. The gregarious chef likes nothing better than to share his knowledge of pizza making built up over a long career as a chef at some of the finest restaurants and hotels in Canada, Europe and the United States.

The desire to express himself through food came gradually after years in the restaurant industry working for others.

“This is what should happen to all chefs,” Santo says earnestly. “After all these years of cooking, I’m finally letting some of my personality come into the food.”

Santo’s interest in food is easily traced to his mother. “My mother was a great cook. You could come to our house and never eat the same meal twice.” Her specialties included lasagna and from-scratch fusilli made by wrapping the pasta dough around square wire hangers, he says.

He is heavily influenced by Italian cuisine. Santo was born in Noepoli, a village of about 900 people in the province of Potenza, which is in the region of Basilicata in southern Italy. It’s a region famous for goat and for pasta made from flour and water, and pecorino, a cheese made from sheep’s milk. “Everything in Italy is very regional,” he says. “People in the south tend to eat pecorino; people in the north tend to use parmesan.”

Education is key
With a bachelor of science from McMaster University in Hamilton, Ont., a teaching degree in music and over a decade of culinary training under his belt, Santo has paid his dues. After coming to Canada with his family as a toddler and growing up in Hamilton, Ont., he received an international education. “My parents were strong believers in education,” he says. They alternated his schooling between Naples and Hamilton every two years in Italy – making him fluent in both languages. His father was an engineer in Italy who found work digging ditches when he immigrated to Canada with his young family in the 1950s.

Santo’s interest in pizza was fuelled by a summer stint living with and working for his mother’s cousin, Pasquale, who ran Pizza Stella on Danforth Avenue in Toronto, Santo made and delivered pizzas for the bustling business, which has since closed, and according to Santo, was the first pizzeria in Toronto to sell pizza by the slice in the 1960s.

Back in the Naples area, he stayed with his aunt and trained for six months. He trained for three years at the Institut de tourisme et d’hôtellerie du Québec – the Hôtelerie – in Montreal, earning only room and board as he learned the ropes.

Following this he earned the designation of first cook after five years – including six months as a dishwasher – at the Excelsior Hotel in Milan, Italy. He then consulted for hotels in various cities in Europe.

Long, varied career
Santo is proud to have worked for Gualtiero Marchesi, an Italian chef considered by many the founder of modern Italian cuisine. He describes Marchesi as a “pure gentleman who respected talent.”

Back in Canada, he worked at two restaurants in Vancouver: The Poor Italian Ristorante and Federico’s Supper Club, before coming back to Kingston to be near his daughter, Savara, 21.

In recent years Santo has worked as a “French” chef for the celebrated four-star-rated L’Auberge in Dayton, Ohio, and as a corporate chef for Bensonhurst Pizza Co. in Calgary, where he made seven different styles of pizza (Chicago was his favourite to make). In Ontario, he worked for Gino’s Pizza & Spaghetti, a five-location Kingston, Ont., chain that started in 1982 in Toronto but is not to be confused with the Gino’s chain in Toronto, and Posta Italian Grill in Port Credit, Ont.

Santo works part time for Mastro Roberto Trattoria, a venerable Woodbridge, Ont., restaurant that opened some 30 years ago. The owner is Luciano Occhiuto. “Luciano is a great manager,” Santo says. “He sees everything. He makes customers feel welcome.” Mastro Roberto is a traditional sit-down restaurant marked by warm stoney archways and an oven where wood feeds the fire from below. Santo says a lot of families dine at Mastro Roberto regularly and return to celebrate special occasions. A favourite of many is the seafood pasta featuring a wide variety of fresh pasta. “It’s spectacular,” he says.

Santo is in charge of pizza on the menu. Each staff member has an area of specialization such as pasta or pizza. Santo, a skilled pasta maker, is ready to help in other areas when needed.

The science
Experimenting with dough and crust is a passion he indulges on his own time with the encouragement of his employer and the use of the kitchen. Santo’s specialty is a high-hydration dough created through a bulk fermentation process. The process consists of 72 hours of fermentation, followed by ball formation, followed by another 24 hours of hydration. “High-gluten flour doesn’t break down,” he says. “And gluten lasts longer so you can get more air into the dough.” He aims for pH level of 7.

For his mushroom-forward Pizza di bosco, which earned him the title Chef of the Year, he added powdered malt to his flour to give it added flavour. “You have to have balance,” he says.

“You’ve got to be half scientist, half artist.”

I decide to tap the scientist for advice. How do you make your dough consistent? “Most important, you need to maintain a consistent environment,” he says. good general ratio is 100 per cent flour, 60 per cent water, two per cent salt and one per cent yeast.

“Control the formulation and water temperature and know how your tools will affect the temperature,” he advises. For example, if you’re using a planetary mixer, the temperature will rise by about one degree per minute. “You don’t want to go higher than 22 degrees or the gluten will break down. That’s the perfect temperature for dough.”

Competing at Expo
After years of working under pressure in fast-paced restaurants, Santo says he expects to be calm when competing at the International Pizza Challenge in Las Vegas in March. One focus will be on travel time with the dough and being careful the air pressure on the plane doesn’t overproof the dough.

He’s not messing with his perfected pizza. “Maybe I’ll play with the recipe – but only after the competition,” he says with a smile.

The art
Santo’s passion is rising to a challenge to create something unique. Here’s an example of the chef’s artistic side at work.

At one memorable dinner with a group of well-known chefs in New York City, Santo remembers they were all impressed by a beurre blanc sauce on lobster served with a port and fig sauce. The chef-owner he was working under asked Santo to recreate it in sushi form.

“I dreamed about it overnight. When I woke up I knew what to do. I used extra virgin olive oil at 105 C, or just above body temperature.” The appetizer he made consisted of a filet of salmon warmed to body temperature on a beurre blanc sauce, with a blini (a Russian pancake) on top, then poached salmon with beluga caviar on top and a sprinkle of fresh chives. It was a hit and received a glowing writeup in the local paper.

Looking into the next year and decade, our Chef of the Year (Traditional) for 2020 sees doughs infused with ingredients like squid ink – and the carrots and avocados he’s experimenting with – as the next trend in pizza. He also thinks dessert pizzas are going to have their moment.

Right now Santo is having his own moment.