Pinsa: a conversation with Rodolfo Santo 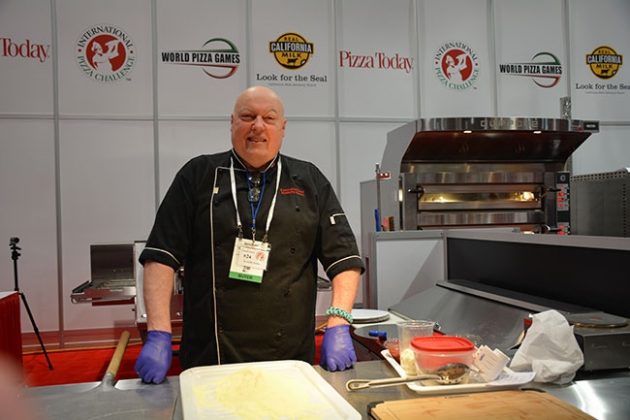 Rodolfo Santo prepares to make his traditional pinsa at the International Pizza Challenge in Las Vegas in March.

My conversation with Rodolfo Santo begins with a description of limoncello that is almost a love letter. The version of the drink he loves is a specialty of the Amalfi Coast in Italy, says Santo, who was born in nearby Naples. “The lemons there are bigger and sweeter. If you are driving along the coast and look down, you’ll see a hillside of lemons covered with black nets for harvesting,” he says.

You need 100 per cent clean alcohol to make it true limoncello, he explains, which is why you cannot make it in Canada. One litre of pure alcohol equals four litres of limoncello, he says – an impromptu lesson. Then you add sugar and ferment it for two weeks. It goes especially well, he says, with a dessert pizza – nutella, peanut butter, banana and icing sugar – like one served at Gino’s Pizzeria and Spaghetti House in Kingston, Ont., where he is corporate chef.

Santo, who was runnerup to Chef of the Year last October, also educates me on the finer points of La Pinsa Romana, which is both the name of his high-scoring pizza and a flatbread tradition dating back to ancient Roman times. The word “pinsa” is the past participle of the Latin verb “pinsere,” – “to crush” – and the forerunner to the modern word “pizza.”

When talking about the pinsa, the easygoing chef becomes dead serious and detailed. “In Italy 99 per cent of pizzas are made using a premade flour, which is a mixture of three flours,” he says, adding that it’s not ideal for him because it contains soya, an allergen, and is expensive. The limitations inspired him to create a dough more to his liking.

He developed a flour combining mixing spelt, amaranth, rice flours and organic Canadian flour. “I use filtered water with a pH of 7, which is perfect. It helps develop the gluten,” he says.

The crust is parbaked, which makes it pleasingly springy. There is a practical benefit as well: it improves workflow and reduces the need for highly trained staff. “Anyone can make it. You don’t need to be a pizzaiolo,” he says.

Every moment is a teaching moment with Santo, and we can learn a lot from this consummate chef who has plied his profession at some of Canada’s and Europe’s best hotels and restaurants and even on the seas aboard cruise ships.

With a bachelor of science from McMaster University in Hamilton, Ont., a teaching degree in music and over a decade of culinary training under his belt, no one can accuse the gregarious chef of not paying his dues.

After coming to Canada with his family as a toddler and growing up in Hamilton he received an international education. “My parents were strong believers in education,” he says. They alternated his schooling between Naples and Hamilton every two years in Italy – making him fluent in both languages.

Santo’s interest in food is easily traced to his mother. “My mother was a great cook. You could come to our house and never eat the same meal twice.” Her specialties included lasagna and from-scratch fusilli made by wrapping the pasta dough around square wire hangers, he says.

His interest in pizza was fuelled by a summer stint living with and working for his mother’s cousin, Pasquale, who ran Pizza Stella on Danforth Avenue in Toronto, Santo made and delivered pizzas for the bustling business, which has since closed, and according to Santo, was the first pizzeria in Toronto to sell pizza by the slice in the 1960s.

Santo followed that passion back to Naples, where he stayed with his aunt and trained for six months. Burned in his memory is a margherita pizza he had at L’Antica Pizzeria da Michele, a well-known pizzeria pumps out 2,000 marinara and margherita pies a day.

“It was the greatest thing I ever tasted. I’ll never forget it, that first bite,” he says. “I wanted to learn how to make that pizza.”

He trained for three years at the Institut de tourisme et d’hôtellerie du Québec – the Hôtelerie – in Montreal, earning only room and board as he learned the ropes. Following this he earned the designation of first cook after five years at the Excelsior Hotel in Milan, Italy.

He then consulted for hotels in various cities in Europe. He recalls nine months spent in Milan in 1998 cooking for a restaurant to help the owner improve his business. Santo found it satisfying to see his employer move “from the back of the paper to the front” after getting positive feedback from customers. To him it was proof the restaurant had “made it.” In a high compliment, and perhaps unaware of his international chops, customers joked, “The menu speaks only Italian.”

Rodolfo Santo prepares to make his traditional pinsa at the International Pizza Challenge in Las Vegas in March.

Santo is proud to have worked for Gualtiero Marchesi, an Italian chef considered by many the founder of modern Italian cuisine. He describes Marchesi as a “pure gentleman who respected talent.” Marchesi sent him to a restaurant in Hamburg, Germany, for two months to help revise the menu. At first the local chef took exception, but after Santo explained he was there as a consultant to help him, the chef was receptive to his ideas.

He says chefs need to be open to new experiences. “When you start to learn, things snowball,” he says.

Back in Canada, he worked at two restaurants in Vancouver: The Poor Italian Ristorante and Federico’s Supper Club, before coming back to Kingston to be near his daughter, Savara, 18, who shares his love of food. “She knows her stuff,” he says.

After a stint at Mastro Roberto Trattoria & Pizzeria  in Woodbridge, Ont., Santo took a position in Kingston. He now works for Gino’s Pizza & Spaghetti, a five-location chain that started in 1982 in Toronto but is not to be confused with the Gino’s chain in Toronto. He enjoys his work at the newest and largest location, which accommodates 30 people. His role as corporate chef gives him freedom to experiment and responsibility for among other things, staff training.

He sometimes finds the younger generation difficult to motivate. “The biggest challenge is culture,” he says. “In Canada, young people are not passionate and not serious about their job. In Europe, being a waiter or server is a respected profession.”

One secret to successful training is repetition. “One problem I have is that I make things look easy. I need to remind people that it takes a lot of practice,” he says. His advice? “Get their respect. Once staff have confidence in you, they will come along.”

Plans are underway to open a Pinsaria in Kingston under the Gino’s umbrella. The new location will specialize in his pinsa and New York-style pies. The team may look at franchising at some point.

Santo has a working theory that food can eliminate borders. “I think if you could just find out what a person ate as a child, you could break down their defences so that they will listen,” he says. He sees food as a way a chef can communicate with a guest. In this conversation, “feedback is the greatest thing.”

“Food is an international language, Santo says, “and detail is what shows people you care.” It’s clear Rodolfo Santo speaks that language fluently.