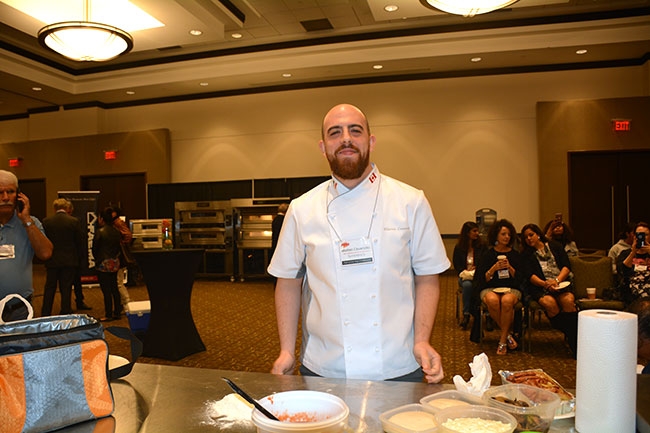 It’s important to open the pizza as quickly as possible, Matteo Cesarotto says. “The most difficult thing is also the most fun.”

Most operators in the pizza business in Canada will tell you it’s hard to find – and keep – good staff. A good employee is like gold.

Enter our newest Chef of the Year, Matteo Cesarotto, a shining example of what’s right with the millennial workforce.

The 29-year-old pizza chef paid his dues in the food industry by taking on junior positions at several restaurants and bakeries as crew member, assistant pizza maker and assistant baker.

“I have wanted to be in this business since I was in culinary school,” says the young chef, who hails from near Padua, Italy, and has made Canada his home since 2015.

Cesarotto started out on a very different career path before landing in culinary school.

“I used to be a nurse for the handicapped,” he says, adding that he couldn’t envision the work as a long-term career.

Undaunted, he enrolled in a pastry and bakery course at a culinary school, in nearby Vicenza and after three years graduated as a pastry chef. He then set to work in the Italian food industry for six years at bakeries, pastry shops and restaurants.

TRUE CALLING OF PIZZA
But Cesarotto found his true calling only after working in Italian pizza shops, including one in the Calabria region where he got the chance to use a wood-fired oven. He knew he wanted to specialize.

“I thought of pizza,” he says. “I tried to make a couple of pizzas and I liked it!”

Cesarotto also found he enjoyed the challenge of spinning the pizza around to make sure it cooks properly – without burning himself on the wood oven.

“The oven was really big and holds eight or nine pizzas,” he says. He likes using wood-fired ovens because they allow him to get the crust really soft and crispy on the outside.

After a few years of learning the craft, including a stint at Ottimi Motivi in Tortora run by the family of past Chef of the Year Carlo Raillo, he decided to move to Canada. He obtained a working holiday permit for six months and worked at The Parlour Italian Kitchen and Bar in Edmonton as well as other kitchens in the area.

When the permit expired, he went back to Italy for a brief time then returned to Canada to work at Buco Pizzeria & Vino Bar in St. Albert, Alta., a city just north of Edmonton and quick commute from his home in north Edmonton.

He has worked at Buco for more than two years, first as a line cook and most recently as food-service supervisor in charge of managing the kitchen. The restaurant is part of the Sorrentino’s Restaurant Group owned by Carmelo and Stella Rago.

Cesarotto knows a lot about Neapolitan-style pizza making but is eager to know more. “I’m always trying to learn more, and improve myself, my techniques and my recipes,” he says.

The trickiest thing for him was learning how to stretch the dough. It’s important to open the pizza as quickly as possible, he notes. “The most difficult thing is also the most fun.”

Cesarotto likes training the kitchen staff and also being part of a team. On a typical night, there is a team of three on. “When we’re working on the pizza side, usually somebody is dressing the pizza and putting the toppings on it, and the other person is cooking and cutting the pizza,” he says.

That team spirit is on display at Buco, where the bar, pizzeria and kitchen are all lined up, allowing customers to sit in front of staff and observe the pizzas being made. Customers can see everything he does, Cesarotto says.

“Sometimes it’s embarrassing, if you make a mistake,” he adds with a laugh, but he enjoys chatting with customers. “Sometimes people are sitting in front of us, and they say, ‘Hey, ‘aren’t you the guy who was in Toronto?’ ” he says, recalling the memorable moment he was named Chef of the Year.

MEANINGFUL WIN
“It is a big honour for me. I came to Canada with a lot of expectation. I really wanted to do well in the pizza industry,” he says. “It’s a big honour not only as an award but also because it helped me see I was a professional.”

“I always try to put my passion on everything I do here and put in a lot of effort. So I’m really proud of it.”

It’s easy to see that family is very important to the young chef. “My parents were so proud after I won,” he says. He is on the phone weekly with his father, a policeman, and his mother, a florist, and stays in close touch with two younger brothers, in Italy.

The day he got back to Edmonton from Toronto, he received his approval for permanent residency and a warm welcome from the team.

CANADA MEETS ITALY
This chef may love the traditional Italian practices, but he also appreciates Canadians’ spirit of adventure. He created his winning pizza, the Mush ’n Boar, to put a Canadian twist on the traditional Neapolitan pizza.

“I wanted to try something adventurous,” he says of the wild boar sausage he used on his pie. “It was hard to find,” he says. On a day off work, he went around to different butcher shops asking for it and finally found it.

“Customers love it! I was surprised,” he says of the specialty pizza that found its way onto Buco’s menu after the competition.

Cesarotto, sees the main difference between Italian and Canadian pizza preferences as a matter of crispness. “In Canada, people generally like it very crispy and very well done. That’s the only significant difference. Everybody has their own taste on the toppings.”

Something else he’s developed a taste for since coming to Canada is craft beer. “I’d like to take a brewing course,” he says.

“Beer is really friendly with pizza,” he says. “I used to brew with a friend in Italy,” he says, adding that wine making is far more common in Italy than beer making. “Love it!” he says of creating different beers, choosing the wheat, hops and yeast. “There are a lot of different yeasts and they can make a difference.”

Asked how he imagines the future of pizza in Canada, he hopes to see more
pizza-making tradition showcased to better advantage. “Pizza still has solid traditional roots,” he says. “In 10 years, I’d like to find more products for pizza.”

His own modest plans for the future convey a sense of excitement. Before competing in Vegas, he wants to improve the sausage that will adorn his pizza. Aside from that, he is enjoying making pizza.

“I am just focusing on work now,” he says. “But I am open to anything.”

It’s important to open the pizza as quickly as possible, Matteo Cesarotto says. “The most difficult thing is also the most fun.”

MUSH ‘N BOAR
Chef of the Year Matteo Cesarotto says he really wanted to find the perfect “union of tastes” between Italian pizza and the products of Canada, particularly from Alberta. That was the inspiration for his winning Mush ’n Boar pizza featuring wild boar sausage.