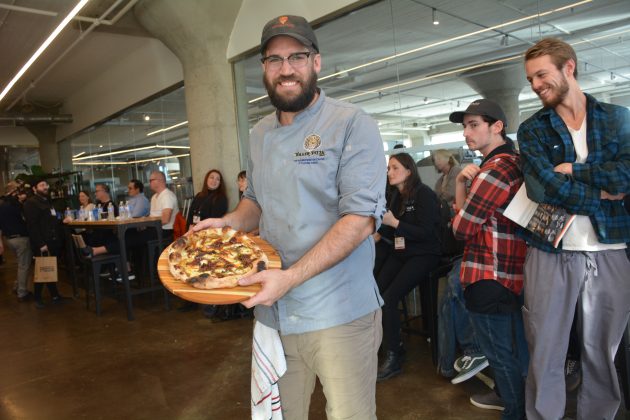 The fluffy, colourful pizza was made using a biga with hydration of 80 per cent leavened for 36 hours.

The Great Pizza Box Fold-Off returned with an enthusiastic group rallied by Marco Caveglia, owner of Tuscan Wolf Pizzeria Inc. in Whitby, Ont. Caveglia brought members of his team to the Summit, including Jayden Collins, who won the box fold-off easily by folding 10 boxes in 46 seconds. Collins started at Tuscan Wolf in 2019 as a dishwasher, then became a pizza maker and, as boss Caveglia says, “a solid part of the business.”

The standing record was 36.33 seconds set by Virgil Risi of Maria’s Original Pizza in Brantford, at the Virtual Pizza Summit in 2020. 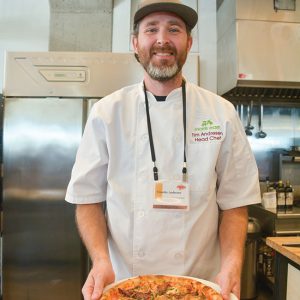 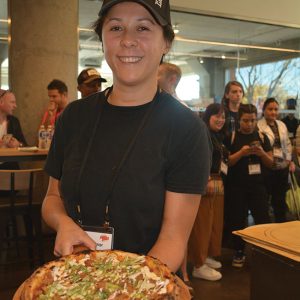 Isabelle Emtage of Izzy’s Pizza displays The Currywurst, dedicated to her late grandmother who inspired her during a visit to Germany. Toppings include house-made curry sauce, potatoes and sausage.

Five dedicated judges had their hands full evaluating 20 creative signature pizzas. Diana Cline is a two-time Canadian Pizza magazine chef of the year champion, three-time winner of “Canada’s Best Pizza Chef” at international pizza competitions and a judge for international pizza culinary competitions in Las Vegas, Italy and France. She is partner with Diana’s Cucina & Lounge in Winnipeg and a consultant to other pizzeria owner/operators.

Tom Stankiewicz has owned and operated Bondi’s Pizza in London, Ont., for 23 years – since 1999. Tom was our 2009 Chef of the Year with his Pizza Calabria featuring Italian sausage, Canadian goat cheese, grilled portobello mushrooms and roasted red peppers. For several years, Tom was involved with the Canadian Pizza Team. In recent years, he tackled diverse topics related to pizza and pizzeria management in his Pizza on Fire column in Canadian Pizza.

Giorgio Taverniti owns Frank’s Pizza House in Toronto, which has been in his family since 1990. Frank’s has received numerous awards including Best Panzerotti in Toronto by BlogTO and Best Pizza Delivery Toronto by BlogTO. A graduate of George Brown College’s culinary management and Italian culinary programs, Giorgio helped found a popular pizza-making workshop at the college.

Judging duties were split between Frank Mazzuca (morning) and Rocco Agostino (afternoon). Frank Mazzuca is the principal of Mazzuca Design, Photography & Ideas established in 1995. Mazzuca’s award-winning graphic design firm focuses on design with direction, photography and ideas that inspire. He is passionate about pizza making and created a Pizza Lookbook with a focus on Neapolitan pizza in 2010. Google Frank Mazzuca FamilyStyle and view any of his over 500 videos on his Food Channel on YouTube alongside his Instagram account.

Rocco Agostino is executive chef and partner for Pizzeria Libretto and partner of Enoteca Sociale. Agostino studied at the Stratford Chef’s School, then studied abroad in Rome. His first experience leading a kitchen was at Ferro Bar Café and from there he went on to open the Silver Spoon. Rocco, alongside Max Rimaldi, opened Pizzeria Libretto in 2008, and as a partner in Libretto Restaurant Group, which includes Enoteca Sociale.

Chefs baked their pizzas in one of four Moretti Forni ovens supplied by Faema Canada: the CEKY gas-fired oven, the Moretti Forni gas deck, the S Series electric deck and the Neapolis.

Out on the show floor, Ardents Mills had its specialty artisan flours featured, Lactalis Foodservice Canada shared information about its dairy products and Reiser helped operators explore options for new equipment and automation. Annex Bookstore had good reads for pizza chefs and operators, including Pizza Czar by Anthony Falco and Tony Gemignani’s Pizza Bible and a selection of books for baking professionals. We welcomed for the first time Pizza Cloud, who supply phone solutions and internet backup for pizzerias. Jean-Charles Madour of Lallemand educated about yeast and brought samples of the company’s InstaFerm yeast, which is ideal for yeast-leavened products containing 3-25 per cent sugar (sweet dough) and rich doughs.

Madour also encouraged pizzerias to join the Baking Association of Canada. Since pizzerias don’t have a dedicated association of their own, becoming a member is a great way to help this longtime association advocate on behalf of bakeries and pizzerias to all levels of government, including a push for easier access to temporary foreign workers. There are many benefits and pizza operators can find more details at baking.ca. 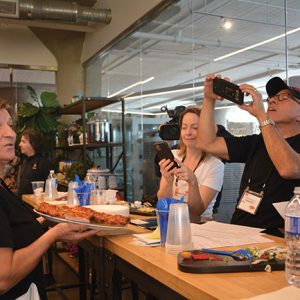 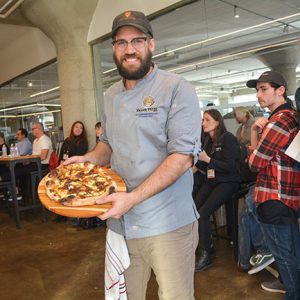 If attendees didn’t get their fill of great pizza by sampling the competition pizzas, they had a chance to enjoy more goodness as Faema Canada held an exciting margherita pizza eating contest. Joe Gonzalez of St. Catharines emerged the winner by finishing his margherita, made by Faema’s chefs and the competition’s oven managers Pasquale Ponticello and Gianluca Ruggieri.

Pizzeria Libretto’s Rocco Agostino brought some of his lucky team members as part of a teambuilding day. Libretto staff competed to win a day out: a visit to their cheese supplier, an afternoon at the Pizza Summit and dinner. What a great idea to motivate your team!

Watch for more on this exciting event, including a profile of our new Chef of the Year East in the pages of Canadian Pizza.

The Chef of the Year competition has always been a place for discovering trends and this year was no exception. Our 2019 Chef of the Year Dean Litster, owner of Armando’s Amherstburg, brought his Roni 3 Wayz pizza featuring shredded and round pepperoni finished off with crispy pepperoni chips.

Christopher Quinn of Maurizio’s in Parry Sound made The Hippie, an original vegan pizza he created for his employer, Maurizio Mascioli, that led to his promotion to sous chef. It features red chili pepper hummus, zucchini, asparagus, carrot shavings, chia and hemp seeds, among other fresh ingredients.

Isabelle Emtage of Izzy’s Pizza made The Currywurst, dedicated to her late grandmother. Toppings include house-made curry sauce, potatoes and sausage.

Marco Caveglia, owner of Tuscan Wolf Pizzeria in Whitby, made his pizza in the European tradition without tomato sauce. The Sweet Reaper featured prosciutto cotto, mascarpone cheese and spicy honey garlic sauce. “It’s a ‘hot’ pizza that kicks your taste a few seconds after your first bite, but that makes you crave it more.” Several in the crowd noticed that kick!