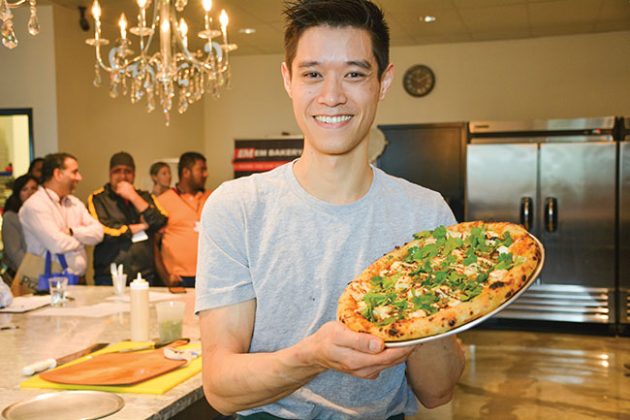 Steven Che took the road more travelled to end up in his happy place at Wild Flour Pizza Co. in Burnaby, B.C. The talented chef found his niche in creating tasty pizzas with innovative flavour combinations and high-quality, digestible dough.

When the Canadian Pizza Summit went west for the first time in June, Che knew the time was right to introduce his creation, Butter Paneer Pizza, to a wider audience of appreciators.

Che, co-owner and head chef at Wild Flour, earned second place for his India-inspired pizza featuring a Makhani gravy base consisting of the pizzeria’s house-blended garam masala, ripe California plum tomatoes, butter and cream. It was topped with caramelized onions, paneer (an acid-set cheese made from cow or buffalo milk) and mozzarella cheese.

Che told us the pizzeria has been getting consistently busier, selling in the neighbourhood of 1,000 pizzas a week and dipping its toe into private dining events.

The pizzeria started as partnership with Clayton Spalding, in whose restaurant Scratch Kitchen in North Vancouver Che made a name for himself as head chef. Spalding approached Che about starting a pizzeria and they worked on the concept for a year. Spalding oversees much of the financial side and behind the scenes of the business while Che’s expertise and previous experiences equipped him to run the culinary side of Wild Flour Pizza Co.

Wild Flour Pizza Co., which opened in early April, is a fast-casual restaurant where customers order at the counter and there is some seating. He estimates the operation is about 60 per cent delivery, 35 takeout and five per cent dine-in. It’s located between two areas where there is lots of residential development, including apartment and office towers.

How did he get into this business? “I’ve been interested in food since as long as I can remember. I’d rather watch the really bad infomercials with the kitchen gadgets than regular TV shows,” he says with a laugh.

Che graduated from the University of Florida with a degree in food science and human nutrition. “I started a cooking club, Culinary Arts Student Union, which is still going strong.” He went into food service and hospitality full time in Orlando. He worked at a sushi bar that recently received a Michelin star and also a popular ramen bar.

Nearing the end of his work visa, Che contacted restaurants in Europe and found his way to Norway in early 2017. He worked as a stagiare, or unpaid intern, at three-star Michelin restaurants.

“I committed to six months of free labour, knowing I’d be at the right place right time when an opportunity came,” Che says. He ended up doing just three months as stagiere and stayed on as a paid chef for about a year under “super high-stress” conditions that included working 8 a.m. to 1 a.m. and managing three stagieres. “We’d clean down three times a day and at 4 p.m. we would take up all our prep and show our chef what we’d made.”

He went to Australia to join a similar type of restaurant working with Australian-style ingredients. Here he found his groove. “My mind is analytical. I started noticing patterns. I started weighing things. Everything was seasoned by percentage, really dialed in. That’s what we strive for [at Wild Flour] – a consistent customer experience in which everything has to hit a certain window of success.”

Working Down Under, he encountered ingredients never heard of before but learned he could apply similar principles to everything and get the result he wanted. He often prepared Marron, which he compares to a freshwater lobster, with meat that had almost no flavour compared to the saltwater counterpart. It was often served with Geraldton wax, a flower that is vibrant green with a sweet and sour flavour.

“I would taste everything all the time. The mouth gets quite fatigued – it’s a lot of salt and fat constantly hitting your mouth.”

He also learned he was ready to run a restaurant after serving as chef de partis and doing a lot of more advanced head chef and sous chef duties. With his year of working holidays coming to an end, he returned to Vancouver in 2020 and met his future partner, Clay Spalding. The rest is history.

Che describes the business as an approachable, streamlined sourdough pizza concept where consistency, execution He was happy to come back to Vancouver, where he’d lived since age 5.

His goal in three to four years is to open a fine-dining restaurant celebrating his experiences as a member of Asia-Pacific culture. In preparation for this venture, he served a nearly four-hour tasting-style dining experience to his sister and her friends. “On the menu were veggies and seafood and things from this area made with Chinese techniques and ingredients and putting together everything I learned overseas. It took about 60 hours of labour to get everything prepped. ”

“If I execute like I plan to, we’d serve only 30 guests a night. Looking forward to that in the future.”