Features In the Kitchen Profiles Recipes 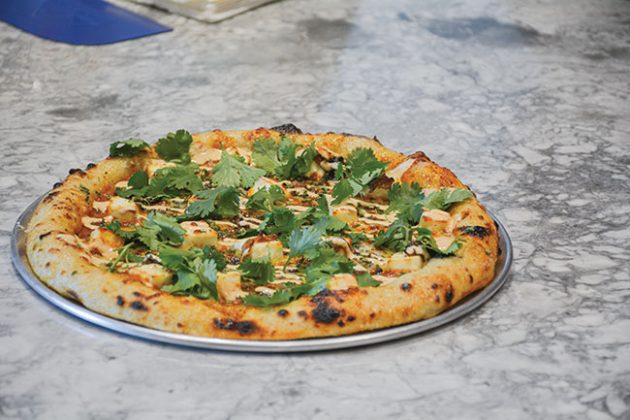 Steven Che’s Butter Paneer Pizza, like many others at Wild Flour Pizza Co., is the sum of Steven Che’s experiences, and seeing patterns for delicious food around the world. The pizza, which placed second in the Canadian Pizza Summit West and Chef of the Year Competition in June in Burnaby, B.C., attempts to reinvigorate the experience of eating a delicious Paneer Makhani with naturally leavened naan.

DOUGH
The dough uses unbleached Canadian Hard Red Spring Wheat and Dark Rye to produce a crust that is very flavourful, tender and structural. It starts with a healthy sourdough mother, which not only provides leavening from natural yeasts but also fermentation of the flours used in the crust to provide a deep umami and mildly sour crust. The process also allows for a tender crust without the use of oils to shorten gluten in the dough.

METHOD
The pizza starts with the Makhani gravy consisting of their house-blended garam masala, ripe California plum tomatoes, butter and cream. As with the base of most delicious Indian curries, caramelized onions are added, along with paneer and a light sprinkling of mozzarella cheese.

The pizza is then cooked at 420 C with a focus to cook the top and bottom of the pizza evenly in about 3-4 minutes.

The Butter Paneer is then finished with garlic oil on the crust, a spiced crema, dried fenugreek and fresh cilantro.