Alimo’s is based on the popular pizza recipe of Abdul and Chafica Mouallem, Ali and Moe’s parents, who emigrated from Lebanon and ran several businesses including a successful bar and grill. Here the family stands in from of Alimo’s “inclusivity wall” – clockwise from left are Ali, Moe, Abdul and Chafica. Photo by Wild Rose Studios

People want to help other people. Sometimes they just need to know how. That’s where our first Pizzeria of the Year comes in.

Alimo’s Pizzeria in Slave Lake, Alta., has made it a mission and part of their brand to inspire and carry out good deeds. Alimo’s is not so much a family pizzeria as a magnetic hub for generosity – and a way to channel donations and messages of goodwill to its community and beyond.

The business impressed judges with its efficient operation, smart marketing and sense of caring. It touched the hearts of judges with its commitment to Slave Lake, Alta., a tight-knit but in some ways “transient town” where a percentage of the population of about 7,000 regularly arrives for short-term work as RCMP or in the oil fields and moves eventually moves away.

Owning and operating a pizzeria is much more than a job or an investment to co-owners and brothers Ali and Moe Mouallem. To them it’s a series of relationships – with their family, their team, their suppliers and most of all their community.

The business is based on their parents’ popular pizza recipe and inspired by their community’s enthusiasm. Abdul and Chafica Mouallem emigrated from Lebanon in 1958 and 1976, respectively, and ran several businesses, including a successful bar and grill. After winding down the bar and grill, they kept getting requests for the pizza. In response, Moe and Ali developed a business plan, opened Alimo’s in 2004 and since then have consistently built its brand by paying it forward.

A social media campaign that went viral cemented the brothers’ higher purpose. It’s a great story. In fall 2019, a nearby Alberta fire department mistakenly ordered pizza from Alamo Pizza in San Antonio, Texas. When the mix-up was discovered, the Alberta department paid to have the pizzas delivered to San Antonio first responders.

Word got back to Alimo’s, who kept the goodwill going. Moe created a colourful graphic and posted it on social media with the hashtag #RandomActsOfPizza, turning the unexpected attention into a campaign that encouraged everyone to order pizza for deserving strangers and perform other acts of kindness. Alimo’s pizza went to people on the street, police stations, hospitals, schools, small businesses – anywhere that people needed a lift. The pizzeria co-ordinated the donations and of course delivered the pizza to surprised and happy Slave Lakers.

The feel-good campaign resulted in a specialty pizza, the San Antonio Screwup, featuring pepperoni, bacon, mushroom, green peppers and banana peppers. Seizing another opportunity to do good, for every pizza sold, Alimo’s donated $2 to Friends for Learning, a local organization that helps organize extracurricular activities for kids.

The positive response to #RandomActsOfPizza motivated them to speed up the pace of their community involvement and reinforce its importance.

“We always pride ourselves on being leaders, not followers, in everything we do,” Moe Mouallem wrote in their contest entry. “We acknowledge that we are nothing without our community. Our commitment to our community, we feel, will strengthen our community, as well as our business.

“We asked ourselves, why be just a pizzeria, when we can use our reach and influence to be so much more.”

You’ll notice a pattern here. These owner-operators are quick to see and act on opportunities to help others and to promote positivity. Ali, Moe and their team have run several campaigns recently that reflect key themes seen since the pandemic turned the world upside-down.

These include #FrontlineFridays, in which they worked with local business sponsors to provide free lunches to frontline workers. They were especially moved by a donation that helps them continue the deliveries. The Lukan family donated $1,000 in memory of their son Conner, a beloved local Humboldt Broncos player who died along in a terrible bus crash in 2018 that killed 15 teammates and injured 13. Alimo’s had been Conner’s favourite pizza place.

“Pizza Is For Everyone,” a two-pronged campaign promoting inclusivity and feeding those in need. First, it was about celebrating inclusivity. “We created a feature wall in our pizzeria with a diverse range of our customers from different backgrounds as well as the word “pizza” spelled in various languages.” They reached out to friends and acquaintances who are visibly different and posted photos and messages. Creating this space was a way to unite people of different races, political views, culture, religion and gender, Moe says. “That’s the vision.”

Second, it was about feeding people, literally and emotionally. Under the tagline “Everybody eats,” they provided free meals to people in need. “We offered free meals to anyone struggling, and encouraged families in need to reach out to us,” Moe says. “We had over $500 in donations in the first 24 hours of posting to our social media. Before Christmas their customers dropped off hundreds of dollars to keep the momentum going. The initiative peaked around Christmas but is ongoing. “We’re always open to it, but people sometimes hesitate to take advantage of it,” Ali says. “We try to make it easy and not require people to give their names. 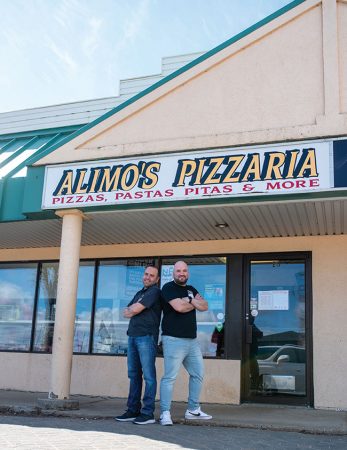 ‘Moevember’
Most touching of their many efforts was a fundraising campaign they organized to help Moe Salloum, their then-13-year-old cousin, who was diagnosed with leukemia last October. Eager to help ease the family’s burden, they swung into action. “Naturally, we went with a “Moevember” fundraising drive in November that got picked up by other community businesses and schools.”

They created a dedicated page called “Moe’s Brave Battle,” funnelled donations and offered to match them up to $500. They raised close to $10,000 to help Moe and his mother, Rima, handle day-to-day needs as Moe undergoes treatment. Originally from Slave Lake, they had moved to Edmonton a year before Moe’s diagnosis. As it turned out, the move allowed them to be close to the hospital where Moe would receive treatment. Besides providing emotional support, the fundraising has helped them get settled recently in a bigger house and buy furniture, allowing Moe to have his own washroom while he continues treatment.

When we spoke with Ali and Moe in May, they reported that young Moe is home from the hospital and going back and forth for treatments. “He still really has a positive outlook,” Ali says. Other businesses followed Alimo’s lead to show they cared. For example, many students and staff at Moe’s alma mater, E.G. Wahlstrom School in Slave Lake dyed their hair and moustaches yellow and purple, the colours of Moe’s favourite NBA team, the Los Angeles Lakers.

Family business
Family and community mean everything to the brothers. Their close circle includes their parents, sister Susan, and their own families. Ali and his wife, Fatima, have four children: Elliyah, Abdul, Omar and Zayn. Moe and his wife Sameraa have three children: Abydah, Saeed and Saif. Fatima and Sameraa pitch in at the pizzeria when their husbands are working out in the neighbourhood.

What have they been up to lately? Alimo’s continues to support the local food bank, women’s shelter, schools and local sports programs. They are busy planning and organizing sponsors for the annual Riverboat Days, a giant block party and children’s fest set for July. And – something new – they’ve been recognizing teachers for their dedication in the face of a challenging school year. Last fall, Telus Canada awarded Alimo’s $500 in a campaign supporting small business called “Stand With Owners.” The brothers made the most of the prize, using it to provide free ice cream to teachers in town beginning on Teacher Appreciation Day in May. Since Ali is a trustee of three public schools, teachers and staff are never far from his mind. They handed out ice cream coupons to area schools. All told, that means about 200 teachers and school staff will enjoy an ice cream on Alimo’s. With local Foothills Creamery flavours such as Shark Attack, a blue-raspberry and shark-grey vanilla with a swirl of raspberry ribbon, it’s a unique treat. The brothers would like to make this an annual event.

We asked them about their creative process and how they build momentum.

“Being independent, we have more freedom than many businesses,” Moe says. “For most of our ideas, we don’t have to wait for approval like a franchisee typically would. We’re able to jump on it within a day or two. Some stuff we do and it doesn’t take off. Other stuff does.”

Community involvement is where independents can shine, he says. “When you can’t match the prices of a franchise, you need to find your own way that’s not going to break the bank. It’s our way of levelling the playing field.”

As we talk, they are enthusiastic about a “sign wars” campaign in the community, a fun campaign popping up in communities across Canada this spring. Businesses tease, challenge and name other local businesses on their signage, Moe explains. This friendly rivalry means that your business is advertised indirectly – almost subliminally – on other people’s signs.

Ali says positivity is key. “It engages people and you see people in your community smiling and being positive. All our social media stuff is about building people up and leading by example. We give others an opportunity to join in and help us get the momentum going.”