Features Marketing
Kindness in the form of pizza

A simple ordering mistake ignited #RandomActsOfPizza in Slave Lake, Alta., and beyond 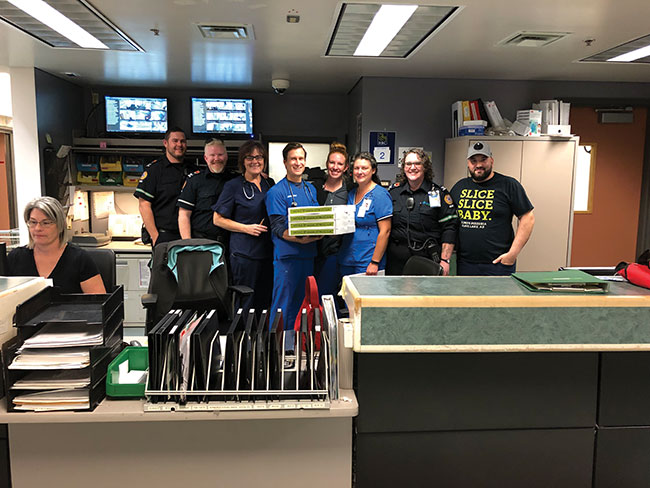 Alimo’s Pizzeria is having a moment. The 15-year-old family-run pizzeria in Slave Lake, a town of about 7,000 people northwest of Edmonton, took an order mix-up and turned it into a feel-good campaign.

Co-owner Moe Mouallem wants to continue the snowball effect by carrying out random acts of kindness and encouraging others to pay forward good deeds. Mouallem is the co-owner of Alimo’s with his brother Ali. Their names combined form the pizzeria’s branding.

For those who didn’t see the headlines carried in many news outlets, here’s the short version. A firefighter for the Lesser Slave Regional Fire Service was asked to order 18 pizzas from Alimo’s for first responders. He accidentally placed the order with Alamo Pizza in San Antonio, Texas.

When the mix-up was discovered, the Alberta department paid to have the pizzas delivered to San Antonio first responders.

Word got back to Alimo’s, who kept the goodwill going. Mouallem created a colourful graphic and posted it on social media with the hashtag #RandomActsOfPizza.

The post stirred the community to donate money to the pizzeria, starting with a $200 donation that Alimo’s matched. More requests came in to deliver pizzas to the community – to specific people or unspecified people deemed deserving.

He hit the streets armed with pizzas. Close to $2,000 worth of pizza was delivered in one day to schools, seniors homes, police stations, hospitals, homes and businesses. “We’d stop people on the street and go into some businesses asking if they wanted a free pizza. People were so surprised. We’d also leave little messages of positivity on the boxes,” he adds.

Mouallem himself was surprised to see the post take on a life of its own on social media. They had attention from around the world. Alimo’s was interviewed by CBC, CNN, NBC and many other news outlets and the #RandomActsOfPizza campaign was included in publicity for a major Hollywood movie, Playing With Fire.

Alimo’s has built a strong relationship with the fire department. “They gave us permission to poke fun at the situation,” he says. And they’ve started a friendship with Alamo Pizza in San Antonio.

“We hope to run #RAOP every October as it coincides with both this specific event and National Pizza Month,” Mouallem says. “The days get shorter and people may feel a bit depressed going into winter.”

“The campaign works with who we are as people and as a business,” Mouallem says. A bit of history: their parents, Abdul and Chafica Mouallem, emigrated from Lebanon in the 1970s and ran several businesses, including a successful bar and grill. After winding down the bar and grill, they kept getting requests for the pizza. In response, Moe and Ali developed a business plan and opened Alimo’s in 2004.

“To be successful in a small town, you need a lot of things to go right,” he says. “We can’t turn a blind eye to the needs of our community.”