Features Business and Operations In the Kitchen Profiles editor pick

Looking to add Italian desserts to your pizzeria’s menu? Find out what is trending 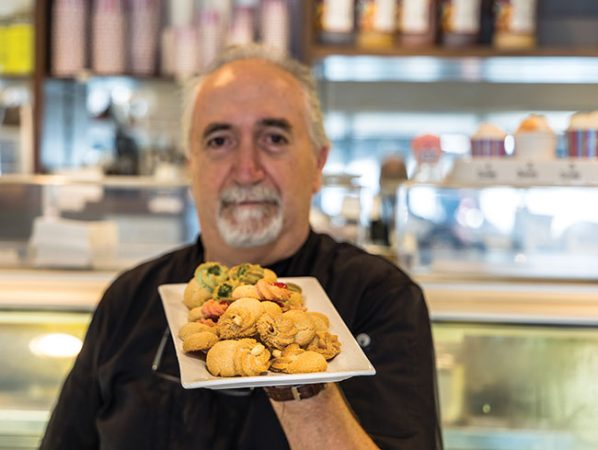 Desserts leave a lasting impression. These sweets are the final menu item a customer eats before leaving a restaurant. Whether you make your desserts in house, or purchase wholesale from a bakery, desserts are an important part of any meal.

Just what is trending in Italian desserts?

Gelato has been on the menu since the shop opened over 43 years ago. “People love it not only because of all the different flavours, but because it tastes lighter, and it is healthier than ice cream,” Calabro says. “Our recipe has more milk than cream, no eggs, and only four to seven per cent butterfat. It has a smoother, silkier texture. Ice cream is made of mostly cream, with up to 50 per cent butterfat.”

PGI sells 200 litres of gelato per week. Pistachio is in high demand, followed by chocolate in its many creative combinations. There is chocolate mint chip, chocolate brownie, chocolate caramel and chocolate orange. Fruity flavoured gelatos range from berry delicious strawberry and blueberry, to tropical such as coconut, mango, or banana. Four other delightful flavours include almond, hazelnut, tiramisu and espresso.

This past summer Calabro introduced even more creative combinations, “Then there is a red velvet gelato, a Kinder Bueno gelato, and a biscotto gelato, with chunks of biscotti.” As for new sorbets, he says, “I designed Mojito sorbet, and a rhubarb and strawberry sorbet.” The pastry chef notes four other crowd-pleasing sorbets including lemon, passionfruit, raspberry and blackberry.

Of course, an upsell with gelato and sorbet is always cookies. For top-selling biscotti, Calabro says, “Vanilla almond are really the most popular. They are a classic.” Other delectable varieties his customers crave include chocolate almond, chocolate Nutella, chocolate chili and cran
berry pistachio.

As for amaretti Calabro says, “I bake the amaretti until crispy, not chewy, and then add an almond on top.”

Florentines are another cookie on the menu. These are anything but standard, with a thicker more generous bite. The batter is made from almonds, butter and milk. Sometimes, the pastry chef will incorporate lemon peel, orange peel and cherries. For added flavour and design, the Florentine is always half dipped in dark chocolate.

Calabro describes the baking process: “I use four-inch tart shells that I prep with oil and butter. This is important, otherwise the cookies may crack. Then, I scoop the batter in. This way the Florentines always come out the same shape and size. I don’t have to cut them.”

Piped and garnished with sugar, dark chocolate, or white chocolate, butter cookies are always on the menu. The flavours vary from classic vanilla and chocolate to pistachio, hazelnut, and almond.

As for cakes, chocolate is everyone’s favourite and the cake assortment is deep. Try the Chocolate Almond Layer Cake, the Chocolate Grand Marnier, the Chocolate Pistachio or the Gianduja Cake. The latter is made with the famous Italian chocolate. Invented during the Napoleonic Empire (1796-1814) in Turin, Italy, Gianduja is a blend of chocolate with 30 per cent hazelnut paste. The smooth blend is purchased in chocolate bars. Yet, it is softer than regular chocolate with an intense hazelnut taste.

Calabro also keeps cheesecake on the menu by customer demand. “Everyone loves cheesecake, because it’s rich and creamy. It is absolute comfort food.” 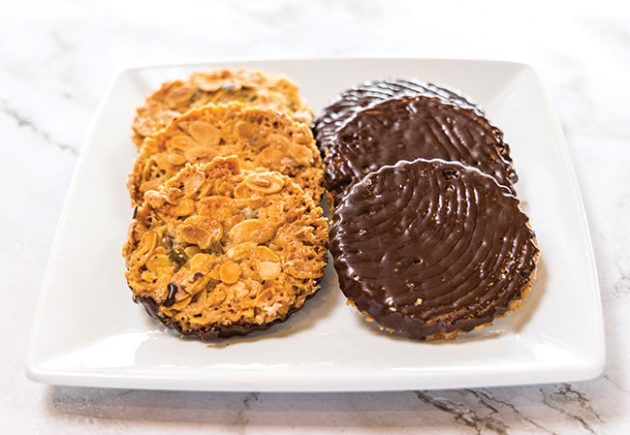 Italia Bakery, Vancouver
Italia Bakery, in Vancouver, opened in 1985. There, the top-selling item is cannoli. “We hand-roll and deep-fry our cannoli shells in house,” says owner Sam Pero. In fact, cannoli became so popular, it inspired another business venture: “I also started a food truck called Cannoli King Vancouver 10 years ago,” Pero says. “We wanted to go out into the community and bring the Sicilian culture, and what better way to do this than through a food truck. Now, we also have a brick-and-mortar location called Cannoli King.”

The varieties of cannoli are endless, and there is a customer for every kind. “If I could only eat one pastry for the rest of my life, it would be the Sicilian cannoli,” Pero says. The Sicilian is made by filling the handcrafted shells with sweetened ricotta cheese, roasted almonds and chocolate chips. Other flavours include vanilla, chocolate, coffee, pistachio, tiramisu and Nutella.

The Nicosia is a tribute to the town in Sicily where Pero’s father was born. Filled with sweetened ricotta, one side has orange peel with a maraschino cherry, while the other has roasted pistachios. The Baci takes its flavour cues from the Italian chocolate brand of the same name. Here, it is reimagined into a cannoli garnished with chocolate shavings and hazelnuts.

In memory of his Nonna Margerita, Pero has crafted the La Nonna cannoli. Filled with raspberry ricotta and topped with pink chocolate, the nostalgic cannoli reminds Pero of the ricotta and jam toast she used to make for him to eat.

“Recipes have been in the family from the very beginning,” he says. “We also tweak and add new recipes our pastry chef and I create, and they are always a hit.”

The bakery has a complete line of cookies to choose from. Biscotti is available in classic almond, lemon pistachio, black pepper raspberry or cranberry orange with pecan. Amaretti is available in multiple shapes. There are swirls, with a central almond, fingers, and pinched creations.

Then, there are cakes. Two opera cake sponges, brushed with coffee liquor make up the base of the Tiramisu slice, which is a top seller. These are layered with a light and delicious filling made from mascarpone, whipped cream and tiramisu. More whipped cream tops it off, with a sprinkling of rich cocoa powder.

Adding or expanding the dessert menu at your pizzeria or Italian restaurant is sure to bring increased joy to the dining experience. Consider expanding your skills to make some of these delicacies or partnering with a business with a dessert focus.

Karen Barr writes about arts, culture and cuisine. She is a graduate of George Brown College and is a Red Seal pastry chef.