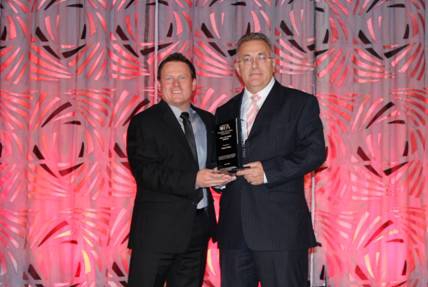 Sebastian Fuschini, vice-president of franchising at the company, which operates Pizza Pizza and Pizza 73, accepted the award on April 13 in Niagara Falls, Ont.

“Pizza Pizza is committed to a culture that is respectful, compassionate and performance-driven,” Fuschini said in a news release. “Our success comes from a foundation of shared values and goals among our network of employees and franchisees. Winning this award is a great accomplishment and our franchise operators should be very proud of their hard work.”

The CFA Hall of Fame Award recognizes outstanding performance by a franchise system over a significant period of time. Winners have high brand awareness (on either a regional or national scope) and are recognized for their solid business performance. Award-winners also exhibit leadership in the franchise community in many ways including: encouraging excellence through sharing best practices; participating in speaking engagements; exhibiting a willingness to mentor new franchisors, and raising the profile of the franchise business model.

“The CFA Recognition Awards are about excellence in the franchise community,” said Lorraine McLachlan, president and chief executive officer for CFA. “Franchising is a significant and growing business sector in Canada making positive contributions to the Canadian economy and the community-at-large. Our CFA Recognition Awards celebrate these contributions. We congratulate Pizza Pizza on this significant achievement.”

Pizza Pizza also accepted an award for the Franchisees’ Choice Designation. This designation is awarded by the company’s franchisees and highlights the company’s overall brand.