Zume Pizzeria in California leads the world with restaurant automation 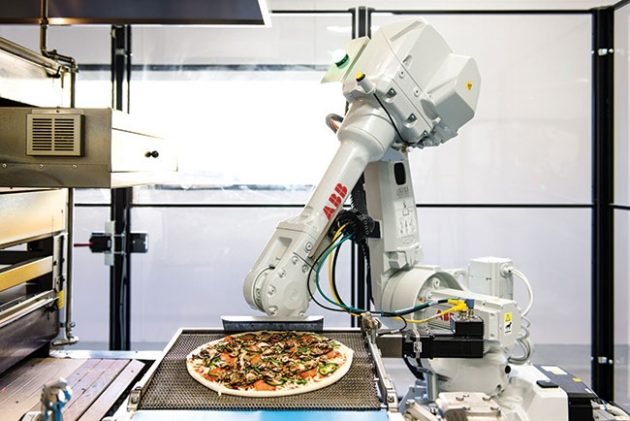 Zume Pizzeria robot Bruno puts the pizza in the oven for pre-baking (after a human has put on the toppings). This unit employs both a camera and a sensor to detect a pizza’s arrival in front of it and its exact location.

If anyone is a pioneer in automation of food processes, it’s Alex Garden. A Canadian ex-patriot and now-popular conference panellist, he founded Zume Pizzeria in Silicon Valley, Calif., with Julia Collins in June 2016.

“My original idea was actually to create a way to bake pizza en route to your door and didn’t have anything to do with robots – that came later,” Garden recalls. “I developed the idea for ‘Baked On The Way’ technology after sitting next to an owner of several pizza franchises on a plane, discussing the downsides of the business: weak unit economics, rigid delivery structure, no room for flexibility with ingredients, customer complaints from cold, soggy pies, etc. From there the idea sparked to take on the $40 billion per year pizza delivery market, but do it better.”

A few years later in 2015, Garden and Collins got together and fleshed out a pizza company based on one founding principle: high-quality food at a fair price.

“We then developed our first team of robots,” Garden says, “to support that mission.” There are no storefront Zume shops, only pizza delivered from a central facility, where robots Pepe and Giorgio dispense the sauce, Marta spreads the sauce and Bruno puts the pizza in the oven for pre-baking (after a human has put on the toppings). A human transfers the pizza to one of seven delivery trucks, each with up to 56 onboard ovens. A software program maps the routes to customer addresses and automatically co-ordinates baking times so that by the time the truck gets to your door (brought to you by the driver), your pizza is just finished cooking. Zume now delivers more than 400 pies a day.

The ingredients are local and very high-quality and Zume chooses non-GMO flour for the crust. The box is completely degradable, including all stickers.

Garden says that instead of focusing on stunts [he points to the unsuccessful use of drones and a cancelled plan to use reindeer in Japan, both by Dominos], they worked to develop a delivery process that would actually improve pizza quality and taste.

“Automation exists to improve the quality of human lives,” he notes. “Before we start any automation project we must have the conviction that it will create a safer, more engaging work environment for our employees – and that it will improve our margins so we can invest even more in delivering high-quality food to our customers.”

In the process, Garden and his team discovered there’s an enormous selection of companies and equipment out there for process automation, and “with today’s CAD [computer-aided design] systems, flexible manufacturing and our imaginations to contend with, it’s really easy to engineer a complex system that checks the box of ‘so cool’ but fails in production,” he says. “In our experience, the best automations are the most simple.” Garden also notes that once they automate something, the real stamp of approval comes later from Zume’s “amazing food and delivery workforce . . .when they tell us automation is really making their lives easier and safer.”

Zume Pizzeria robot Bruno puts the pizza in the oven for pre-baking (after a human has put on the toppings). This unit employs both a camera and a sensor to detect a pizza’s arrival in front of it and its exact location.

APPLICATION CHALLENGES
Bruno, the robot that picks up a topped pizza from the conveyor and places it in the pre-bake oven, is an ABB IRB 2600 made by ABB Robotics. Nicolas De Keijser, assembly and test business line manager for the company’s North American division, says enabling Bruno to maintain a pizza’s round shape proved to be a significant challenge.

“When transferring, dough can easily stretch or ripple up,” he explains. “This was addressed by developing an innovative gripper attached to the robot arm with a built-in conveyor.” De Keijser says it was also a challenge to perfectly synchronize the motion of the robot and the gripper with the movement of the main conveyor.

Marta, which spreads the sauce, is an ABB IRB 360 FlexPicker unit. This unit employs both a camera and a sensor to detect a pizza’s arrival in front of it and its exact location. “This allows the robot to accurately spread the sauce in a specific pattern,” De Keijser says. “Depending on the type of pizza, the spreading pattern of the sauce varies.”

He says the use of robots in kitchens is very new, but that robots are being used around the world in similar applications such as spreading sauce in a frozen pizza plant and packing food items. And for ABB, De Keijser says novel uses of robots in the service, entertainment and retail industry are “definitely” an increasing trend. RoboScreens, for example, are used above the main stage on Royal Caribbean Quantum Class cruise ships, which involves a screen mounted to the arm of an ABB articulated-arm robot. This enables a unique viewer experience featuring virtually unlimited movement to the video media. Another ABB articulated-arm robot is now being used in an automated luggage storage and retrieval system at Yotel, a brand new luxury hotel in Manhattan.

AUTOMATION AND HUMAN JOBS
Zume has more than 130 full- and part-time human employees, and Garden says the use of the four robots has provided “several amazing advantages.” Labour savings allow Zume to provide an average hourly wage of $16.31, and all employees are shareholders with good benefits. Savings from robot use have also been reinvested in higher-quality ingredients.

In addition, Garden says further automation of the remaining repetitive pizza-making tasks will allow the replaced employees to get “involved in areas of the company that they are most interested in.” As kitchen staff is eventually cut from six to two (with the two remaining humans slicing and preparing toppings and overseeing quality control), the four replaced workers will move into what Garden describes as “more stimulating roles in the company, like marketing or data science.”

He adds that “those jobs that require more advanced creative skills, like tasting and recipe development, will always be done by humans. Jobs are sacred to us, so we believe there’s room for people and robots to coexist.”

Not everyone shares that view. The topic of robots in restaurants came up in a May 2016 interview on ‘Fox Business’ with former McDonald’s USA CEO Ed Rensi. Commenting on a possible $15 minimum wage, Rensi stated that “it’s cheaper to buy a $35,000 robotic arm than it is to hire an employee making $15 an hour” to bag French fries. Rensi went on to call a $15 minimum wage “very destructive” and predicted it would “cause a job loss across this country like you’re not going to believe.”

Has the robot restaurant revolution already begun? At Pizza Hut restaurants in Asia, customers with a MasterCard “MasterPass” on their smartphones give their orders to robot waiters named Pepper (menu screens are located on the robots’ chests). Digital ordering kiosks have been installed by Wendy’s, McDonald’s and Panera across the United States to speed up service and reduce labour costs.

For its part, Zume continues to automate. The firm has installed a dough-pressing machine that can turn out a pie every nine seconds, four times faster than without it.

“In terms of drones and self-driving cars, we’re always monitoring the latest technology and there may be room for those types of developments in the future,” Garden says. He adds that “eventually, we’d like to grow across the West Coast, then the entire country, then across the globe!