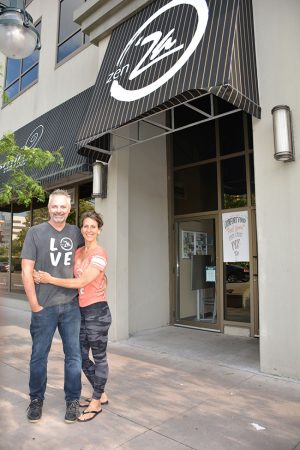 Not long after the two fell in love with each other, Wayne deGroot and Jocelyn Morwood-deGroot fell in love with a health-focused pizzeria they visited in Florida. Unable to find its equivalent back home in London, the two opened Zen’Za Pizzeria at the former Rico’s Downtown location. Photos by Julie Whelan Photography

Wayne deGroot and Jocelyn Morwood-deGroot, the owners of Zen’Za Pizzeria in London, Ont., have been on a health and career journey and ended up right where they should be.

Wayne and Jocelyn sat down with Canadian Pizza to talk about the pizzeria they launched just over a year ago as a labour of love. With solid bookings, glowing online reviews and inspiring stories about satisfied customers, it’s safe to say Zen’Za is now much more than a dream: it’s a viable business, an important part of downtown London and a meal provider for an underserved clean-eating market.

This very grounded couple support customers who want to eat clean and who may not always find a restaurant to suit their special dietary needs or preferences. That includes but is by no means limited to vegetarians, vegans, and those who have food allergies and sensitivities.

Jocelyn says, “I want people to feel good when they’ve eaten the pizza, maybe even better than they did when they came in.”

Some people wonder if they are giving up taste by eating healthier, she says. “We looked at it in terms of ‘If we build it, they will come.’ And they have.”

Although they serve all kinds of customers, including those who eat meat, one situation that seems to represent their food and business philosophy is the family with different requests all sitting down to a meal together. She gives the example of a teenage boy who wants a meat lover’s pizza, a mother who wants a gluten-free pie, a father who is lactose-intolerant and a daughter who has a food allergy.

The shop is laser-focused on pizza and its appetizer and salad menus are small and complementary. The menu promotes inclusivity by asking outright for input and ideas from pizza lovers. “This menu is a starting point,” it reads, finishing the price list with the sentiment, “Love is already included in every meal.”

Wayne and Jocelyn describe their business as a mom-and-pop shop. Partners in life and business, they handle aspects interchangeably, although typically he makes the pizzas and she handles front-of-house duties. They both love to interact with customers and sometimes she has to rescue him from customers who want to chat. It’s a happy peril that comes with having an open kitchen visible to customers.

When not working in the shop, Wayne is an architectural designer, and Jocelyn, a yoga instructor. Their other jobs help support the recent venture into food service, but when looked at as a whole, each element seems to support the rest in one big wholesome hub.

The 36-seat restaurant is located on the ground floor of the Renaissance apartment building in the city’s downtown. Which happens to be where the couple live. Zen’Za is directly across the street from Budweiser Gardens, a sports-entertainment centre that presents OHL hockey games, big-name music concerts and other events.

Rising up beside the Gardens is Covent Garden Market, where the partners buy most of their fresh vegetables from various suppliers and some of their meat ingredients from Field Gate Organics.

Every ingredient they use is fresh. “There is no freezer in the restaurant,” Wayne says.

They have a few vegan cheeses and they make gluten-free meats such as their vegan sausage in house. “It is a bit more labour intensive,” Jocelyn says. Another popular specialty is their coconut bacon, which simulates the taste of bacon. Organic ingredients are more expensive, she says, but they are pretty easy to find these days.

THE INSPIRATION
Not long after Wayne and Jocelyn fell in love, they fell in love with a health-focused pizzeria they visited in Florida. Jocelyn, a self-described “clean-eating freak,” wished they could find something similar back home. “There was nowhere I wanted to eat,” she says. Zen’Za Pizzeria was the result of that quest.

They serve people the food they would eat themselves, she says, and favour food that contains no genetically modified ingredients. “Food is medicine. You’re going to eat what makes you feel good. It’s a whole new take on comfort food.”

After returning, opportunity came knocking in the form of friend Rico Lanzi, who operates longtime London business Rico’s Pizzeria across the city on Hamilton Road. Lanzi couldn’t find the right person to operate his second location, Rico’s Downtown. The veteran operator taught Wayne how to make pizza, they perfected an ultra-thin crust and took charge of the business. They changed the name with a nod to the former owner on their website and social media pages and also on their menu in the form of Rico’s Famous Margherita Pizza.

They use a gas-fired oven and cook on a stone, Wayne says. They can’t use a wood-fired oven because their location beneath apartments wouldn’t meet regulations.

They make one size of pizza – 14-inch, round – on a very thin, toasted crust. The toasted style is easier to break down and digest, he says. “The crust is a vehicle for the toppings.”

A MULTI-USE SPACE
The restaurant is a “multi-use, high-energy space that is whatever it needs to be,” in Jocelyn’s words. Wayne, a designer by profession, sees lots of possibilities for what the space could be. Already it plays host to Jocelyn’s yoga teacher trainees, private parties and their own family functions.

Last Christmas they surprised their family by taking their wedding vows during a rare extended family gathering that included their children – she has two grown sons and he has one. “It was the anniversary of our first date, and with everyone coming, it just seemed like the right time to do it,” Wayne says.

As for working together as a couple, Jocelyn says she and Wayne work well together because they communicate openly. “We are transparent with each other. We don’t have any pent-up feelings,” she says.

Because they have other jobs on the go, work-life balance is especially important to the couple. They take time off when they need to and they take vacations. “We take care of us so we can take care of everyone else,” Jocelyn says.

That doesn’t mean they don’t talk about work during their time off. “This is our baby,” she says with a smile of the business they opened the business nine months after they got together. “So we talk about it all the time.”

In fact they took a week off last March to mix work and play by attending the International Pizza Expo in Las Vegas. The event opened their eyes to the industry. “There are a lot of positives to attending a trade show,” she says. “You see people doing something similar to what you’re doing. It’s just good to see what’s run-of-the-mill and what’s different.”

After taking time off, there is no sense of dread on coming back to work, she says.

Another way they maintain balance is to keep rather unusual hours for the restaurant business. They are closed Monday and Tuesday for private functions and to give Wayne time to work on his design projects. They are open Wednesday, Thursday and Friday for lunch and dinner, and Saturday and Sunday for dinner only.

Not long after the two fell in love with each other, Wayne deGroot and Jocelyn Morwood-deGroot fell in love with a health-focused pizzeria they visited in Florida. Unable to find its equivalent back home in London, the two opened Zen’Za Pizzeria at the former Rico’s Downtown location.

NO REASONABLE REQUEST DENIED
However, they sometimes see faces of regular customers and friends pressed up against the glass – some of them finishing shifts in their own restaurants. If the oven is still on they will cook someone a pizza, Jocelyn says.

The couple are eager to accommodate all manner of special requests; in fact, they make it a point of honour not to disappoint. They’ve had some interesting requests.

Anchovies, pineapple and hot peppers was a surprising combination ordered, they agree. “It covers the salty, the sweet and the spicy,” Wayne explains.

Is there any request they won’t meet? “We do not serve slices,” Jocelyn says. “And we do just one type of crust. So we don’t do a thicker crust.” But in typical people-pleasing fashion, they came up with an innovation meant to satisfy those who want a heartier, thicker pizza: the double-decker, which features two sauce and cheese pizzas, one on top of the other, with the toppings on the outside pizza only. It’s proven very popular.

Wayne loves making the double-stacked pie. “We hit hard on social with that one,” he says.

BALANCING TAKEOUT AND DINE-IN
With its busy central location, the pizzeria sees lots of foot traffic. They sometimes get a big order for takeout, which can slow down dining room service. To prevent bottlenecks, they encourage people to call ahead and place an order or reserve a table if they are going to an event afterwards.

She is a big proponent of being open and honest about how long an order will take, and keeping people happy with drinks and appetizers until their pizza is ready.

As for what the future will bring, Jocelyn says they have discussed the possibility of franchising someday, possibly out west. She says she could envision that, if they found the right person to run it.

Right now, they are preparing to hire their first staff and are discerning about hiring.  “We want someone who feels almost as passionate – if not more passionate – about what we’re doing as we do,” she says.

In general, Jocelyn says, London has not seen a huge variance in pizza styles. That’s partly why they opened their place. “We are not in competition,” she is quick to add. “We just want to be the best we can be.”