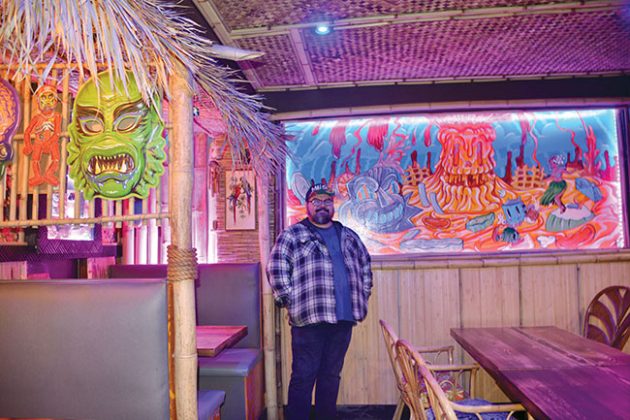 Maipai was conceived as a secret foodie escape tucked into downtown Hamilton, Ont., where you’d least expect it. “Take a vacation without leaving the city in our hidden tiki bar,” the restaurant’s website invites.

We’re sure owner Salar Madadi meant for the secret to be discovered when he entered his Mala Honey Pie in the Best Pizza Recipe competition last fall. It worked! He won coverage in Canadian Pizza and a trip to compete at Pizza Expo in Las Vegas. He also caught the attention of local newspapers the Hamilton Spectator and CBC News.

We are very happy to have helped this innovative businessman spread the word about Maipai. It’s not often we come across a tiki bar built around top-notch pizza.

First came the idea. Owner Salar Madadi wanted to create a dual tiki bar and pizzeria: “a secret surprise where you lose the outside world,” as he puts it.

Then came the location. A few years ago, Madadi and and his wife Jeannie moved downtown from the north end of the Steel Capital of Canada, which has a population of more than 579,000. They liked the working-class area – home to Stelco, Arcelor Mittal/Dofasco and many other manufacturers – and thought the location might work for their business concept. “We live three minutes away and when I decided to open the new business, I wanted to open in the actual area that I live in,” Madadi says.

Madadi worked for 13 years in IT before getting into food service. In 2013 he established MeatVentures Meat Wagon, a seasonally operated, custom-built food truck and catering company specializing in barbecue with internationally inspired flavours. It operated as part of an incubator program at Roux Commercial Kitchen and Food Truck Commissary, a shared kitchen where they prepped food.

In 2015 he opened Pokehbar at the Hamilton Farmers’ Market and expanded to a second location in 2017.  He had a lot of help and guidance from Brett Liersch, an experienced operator who with wife Kara owns and operates Dirty South – a business that serves up “comfort food with a twist” at quick-service, full-service and mobile locations. Liersch was ready with answers to the new operator’s questions.

At Pokehbar the team, which included Salar’s brother Shayne Madadi, served the traditional Hawaiian specialty of Poké bowls “when no one else was doing it.” His specialty was selling fresh ahi tuna Poké bowls at a small storefront on Concession Street on Hamilton Mountain and the Hamilton Farmers’ Market. The focus was on healthy eating, and gluten-free and vegan versions were available.

In April 2021 he put the Poké business on hold to focus on Maipai, which opened early in 2020, under the management of Madadi and then-partner Peter Lazar. It is part pizzeria and part tiki bar that focuses on two distinctive specialties – Detroit-style pizza with a twist, and original cocktails. The pizza and cocktails complement one another and in that sense everything in the business works together to serve the kitschy, Hawaiian tiki theme – think of The Brady Bunch’s “Hawaii Bound” episode on early 1970s TV and you get the idea. A street sign high above the front door uses industrial images that tie in with the surrounding area. A bright turquoise-sea green entryway with glass door featuring tropical artwork invites customers inside to a bar that seats up to 20 in bamboo-style chairs. The warm glow of wicker basketed lights, tiny coloured lights, dried pine branches and bamboo trellis overhead draw your eye upwards to give you a feeling of cosy festivity.

It’s a perfect setting for this editor’s first in-person interview in a pizzeria dining room since the pandemic began. I talked with Madadi at a relatively prosperous time when indoor dining in Ontario was in full swing again – a sweet spot that would last until just before Christmas and the omicron variant caused business to slow and soon after, mandated dining rooms to close.

Early in November, Madadi, who is cautiously optimistic and smiling, reports they’re up to capacity again with tables getting booked up well ahead for Friday and Saturday – when they are open late until 11 p.m. – and Thursdays and Sundays not far behind. They do dinner only as dine-in and takeout from Thursday to Sunday.

The bar is on the left side of the room and as we turn left into a larger dining room we see there is bar access from there as well. Servers can pick up cocktails while standing next to the six-foot-high sculpture of an oversized head associated with Easter Island, or Rapa Nui. The bartender is getting ready for a Thursday night crowd.

Carrying through with the theme, colourful Easter Island and other tiki mugs are available for purchase at $20-30 each. The room is features bamboo wooden tables and booths that would make Gilligan and Skipper feel at home. But it’s the vibrant, glowing artwork that makes this large dining room feel extra special. Madadi’s friend Dope Chief, a respected local artist, painted glowing murals, one of which features a sort of molten orange and hot pink volcano and grinning purple tiki mask. According to Dope Chief’s Instagram page, his art “combines the lighthearted nature of cartoons through identifiable elements with mature themes.”

Chill ambient music and alternative pop is set at a volume low enough to let diners talk and just high enough to remind them they are not at home. They are in the middle of a unique experience they will want to tell their friends about on social media.

While the location has worked out well, Madadi says they had to adapt the kitchen to their needs by re-arranging the equipment to remove things they wouldn’t use and adding their Bakers Pride Y-602 deck oven.

Why Detroit-style?
Madadi was inspired to make his own version of Detroit-style pizza when he visited Descendant in Toronto. “I really liked it,” he said of the pizzeria run by Chris Getchell. Madadi later signed up for a course run by the respected late Detroit-style pioneer Shawn Randazzo, whose name you may recognize from Pizza Expo sessions and competitions. “Shawn focused on the operations side of things. He went into the math,” Madadi says. Closer to home Madadi took roman and pinsa classes at the School of Italian Pizza in Toronto.

He describes his style as a cross between D-style and roman al teglia. It is parbaked and he does a finishing bake using a timer to achieve consistency.

Maipai’s menu is focused on the pizza – a strategy that makes the restaurant a destination for people from Hamilton and surrounding cities and towns. “Our food menu is small because we believe in focusing on a few things and doing them well,” Madadi says.

He describes his pizza in detail on the Maipai website and social media, hoping to educate people about this style. “Deep dish in a seasoned steel rectangular pan imported from Detroit. Thick crusts, but airy and crisp after cold fermenting for 48 hours. Mozzarella and brick cheese that go edge to edge, baking into a crispy cheese crown all the way around.” 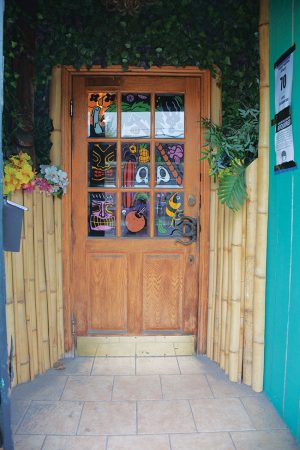 With Maipai, owner Salar Madadi set out to create a dual tiki bar and pizzeria: “a secret surprise where you lose the outside world.”

Focused menu
Madadi calls the selection small but there are a dozen powerhouse pizzas with interesting flavour combinations that are available in vegetarian and gluten-free versions.

And of course Madadi’s award-winning Mala Honey Pie is on the menu. You’ll find the recipe in the November/December 2021 issue of Canadian Pizza.

Maipai also is known for its cocktails and mocktails. When take-out business boomed, Madadi introduced take-home cocktails pre-mixed and in kits, services that have proven popular with people stuck at home in a pandemic.

The Hurricane cocktail kit includes a blend of passion fruit and lemon to which customers add their favourite rum, garnish, umbrella, paper straw and mixing instructions. The $15 kit makes libations for four. The pre-mixed, two-ounce Blue Hawaii is another menu favourite – a popular weekly special.

Streamlined operations
When the pandemic hit, they were not doing delivery or takeout, so they had to quickly get takeout and curbside pickup up and running. The short-term effort was worth it.

“It was way more straightforward with takeout only,” Madadi says.

When we talked last November, they had just hired a full-time host and Madadi was anticipating things becoming smoother at the door.

With the dining room open, Maipai has about 15 staff – the typical mix of full-time and part-time employees. During the pandemic they were able to keep about half their staff, giving them enough staff to train new hires as they were able to take them on.

Former partner Pete Lazar helped design PVMT, the digital ordering platform that manages orders through text messages. They use a POS system by TouchBistro. He likes the inventory tracking system, which lets him know what he has on hand – and when it’s time to order more ingredients.

Madadi handles all of the restaurant’s social media posts. They target a slightly younger crowd than those who hang out on Facebook, so he puts more effort into Instagram. Maipai offers feature pizzas for a week at a time and their feature pizza videos see a good engagement rate.

“I like sharing something new people haven’t tried before,” he says with a smile. “And I like using my creativity and building something unique.”