Features In the Kitchen Recipes 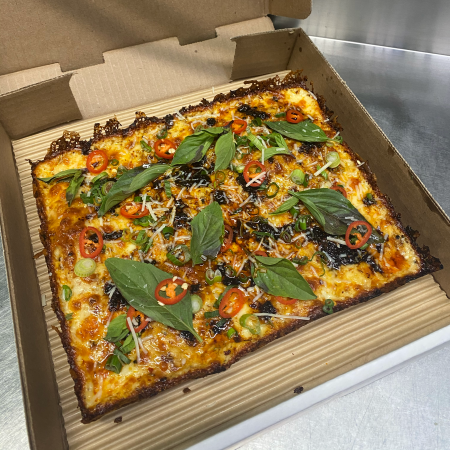 The Mala Honey pie by Salar Madadi, owner of Maipai tiki and pizza bar in Hamilton, Ont., was named Best Pizza Recipe at the Canadian Pizza Summit. “I’ve never seen a combination of flavours like this on a pie anywhere,” Madadi says. “We specialize in Detroit-style pizza and tiki cocktails, and we keep a small but focused menu.”

He adds: “On a Detroit pie, this one hits all the bases – crisp from the cheese crown edges and crust, acid from the pickled chili, heat from the chili/crisp/honey, umami and salt from the Asiago, sweetness from the honey, and a little touch of bitter from the Thai basil.

“I’ve been a fan of Sichuan peppercorn and Mala flavours for a while, and I had created a wing flavour for our restaurant that used our house Mala spice and hot honey together. This started off as a staff meal experiment using those two as a base and evolved into this with some testing and balancing. I like to create a balance and contrast of textures and flavours on my pizzas, and this one is my favourite so far!

1. Brush the inside of your Detroit pizza pan with canola oil, making sure to get the inside edges all the way to the top.
2. Place your par-baked crust inside the pan. We par-bake our crusts to catch the rise exactly where we want it and to simplify our nightly dinner services.
3. Sprinkle with all of the dried oregano, starting to build up layers of flavour.
4. Scatter all of the mozzarella/brick onto the crust, going a bit heavier at the edges and lighter in the middle to help build a cheese crown.
5. Evenly sprinkle all of the Mala spice over top of the cheese.
6. Evenly scatter all of the chili crisp over top.
7. Bake at 525 F for 10-12 minutes until bottom crust is crisp and golden, cheese crust is brown, but not burnt, and cheese on top is starting to brown.
8. Let cool in pan for 15-30 seconds before carefully using a metal spatula to remove the pizza from the pan, being careful to leave the cheese crown intact.
9. Transfer to a cooling rack for 2-3 minutes.
10. Transfer to your serving plate and cut into 8 pieces (we like to throw a corrugated liner underneath still to keep the crust from getting soggy).
11. Garnish the pizza evenly with the remaining toppings other than the honey in this order: green onions, pickled chilis, Thai/cinnamon basil, shredded asiago.
12. Drizzle the hot honey in a zigzag over the whole pizza.
13. Enjoy!

Steps:
• Add the first 4 ingredients to a dry frying pan and toast over medium-low heat for 2-3 minutes until fragrant.
• Transfer whole spices to a spice grinder and grind to a fine powder.
• Add salt/sugar and mix thoroughly.

Steps:
• Whisk all ingredients except chilis together until dissolved.
• Thinly slice the finger chilis and add them to the brine.
• Let sit for at least 1 hour.