From Rome to Canada 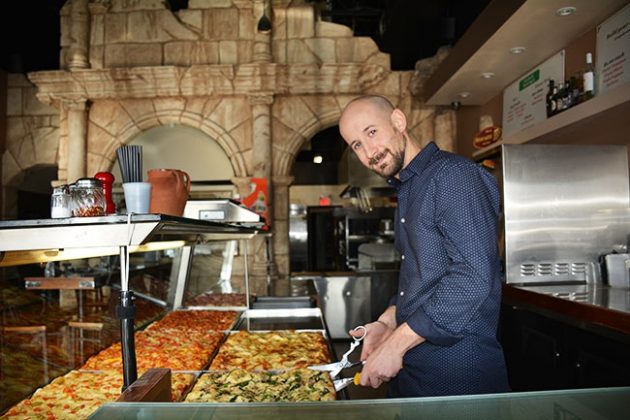 Ciao Roma owner Rob Federici snips into a fresh pan of Roman-style pizza. The Woodbridge, Ont., shop sells signature pizza both by the slice and as part of boxed selections. Customers like having the choice, Federici says.

When in Rome, you do as the Romans do. For Roberto (Rob) Federici, owner of Ciao Roma in Woodbridge, Ont., that means sampling fresh, delicious pizza made in hole-in-the-wall pizzerias in the land of his heritage.

Federici had a vision to bring pizza al taglio (by the cut) to Canada from The Eternal City, and six years ago he set out to make it happen.

His family’s roots are in Rome, where several relatives still live. The 32-year-old entrepreneur, who has worked in the restaurant industry since age 19, visited relatives for four months to experience food culture and find the perfect pizza in the perfect style. A month and a half in he found his holy grail: “The best pizza I’ve ever eaten. Period.”

It then became the challenge to convince the pizzeria to teach him the secret recipe. He asked the owner to hire him and was told no. He asked to work voluntarily as an apprentice and was again told no. His persistence paid off and the third time was the charm.

Federici explains: “I said, listen, I need to open a pizzeria in Toronto. I’m not going to open it next door to you. This is the best pizza I’ve ever had in my life. It’s amazing and I need to learn this recipe.”

The owner relented and agreed to run a paid one-month course for Federici to teach him pizza making. The keen learner worked long hours, and at the end of that month, the owner offered to keep him on for another month to teach him the back-end functions of a pizzeria.

The man who did most of the teaching – Valerio – wasn’t the owner but a chef and manager. It was Valerio’s recipe and his back-of-house and front-of-house systems that put Federici on his path to al taglio success.

Once he returned to Canada, Federici called Valerio a number of times throughout the process.

“Running any business is challenging,” he says. “Having someone there with that experience makes it that much more likely things will go smoothly.”

Valerio decided to stay in Canada with his former employer’s blessing. “The owner knew Valerio was always going to go abroad to work. It was just a question of where,” says Federici, who ended up sponsoring his mentor three times. Valerio is a permanent resident and still with him. The two work rotating shifts, handling chef duties as well as day-to-day managerial tasks.

What is pizza al taglio?
Federici describes the typical al taglio shop in Rome. “They tend to be hole-in-the-wall places with minimal seating and a full display of pizza that you would choose from.”

“This style of pizza is served in strips,” he says. “They cut as much as you want, then they weigh it and warm it up and you take it to go. At Ciao Roma, we cut the pizzas down the middle, then we do a strip to half. Any order of less than half a pizza gets weighed to determine the price.”

Federici says he set out to offer the al taglia style. Finding an excellent pizza recipe in that distinctive – and for Canada, different – style was the challenge. “If I hadn’t found that great recipe, I would not have opened my pizzeria.”

Of the pizza’s properties, he says, “It’s a little bit thicker but very light and airy and crunchy and very easily digested. That’s because of the process we put it through.”

You can get pizza al taglio throughout Italy, but as you get away from Rome, it becomes harder and harder to find, he says.

“Usually it’s in a more high foot-traffic area. We kind of went against the grain on that point, just because we felt this area had a large proportion of business clientele.”

He chose to locate in a business area because it was a “lunch-heavy spot.” It’s quick in and out, in and out, people grabbing one or two slices, have a beer, eat quickly and they are on their way. It’s proved to be a good location because lunch is our busy time.”

Federici grew up in the area, spending his early years in North York and ending up in Woodbridge, a large suburban community of about 100,000 within the city of Vaughan, just north of Toronto.

Ciao Roma’s plaza location, just off Weston Avenue near the corner of highways 400 and 7, seemed a good fit. “It has a good mix of complementary businesses – not street frontage but pretty close to it and you can see the big pizza sign when you’re coming north,” he says. “We knew there was going to be more development nearby, so that was a factor.

“It was a little bit of forecasting the growth of the area,” he says. “But we also thought, if you have a really good, unique product, people will drive to find it.”

Customers do seek out the pizzeria. Federici thinks freshness is a key reason business has taken off.

“We don’t prep for days, we prep for, basically, one day,” he says. “It’s just a constant turnover of fresh ingredients. We order everything pretty much every single day.”

A good relationship with his suppliers helps make this possible. “We have really great suppliers that don’t enforce minimum orders,” he says.

People notice the difference, he says. “We do build-your-own salads as well, and people say, ‘These salads are amazing.’ We don’t use any different ingredients from anyone else, so the only thing I can attribute it to is the freshness. We ordered it yesterday, we’re cutting it this morning and we’re serving it to you today.”

Opening at ‘a brisk walk’
When Ciao Roma opened in 2011, everyone within a 10-minute radius of the shop wanted to be the person to tell family and friends about the new place.

“They didn’t want another friend to tell someone they knew in common before they did. They wanted to be the one to spread the word, which was amazing for us! It spread the news like wildfire and we were busy from Day 1. You know how they say crawl before you walk? Well, we started on a brisk walk and it was because of that.”

It also helped that they participated in a select events to give the community a taste. They catered the mayor’s inauguration, bringing in nearby Grazie Ristorante, where Federici used to work, as a silent partner. “We did a few other events at Grazie. We made a ton of pizza and invited a ton of family members to come out. They say that for everyone who likes your pizza will tell three to five others about it. It’s just trying to find creative ways to market yourself and reach people. The best way, I figured, was to let them try it.”

Ciao Roma’s display case, with its colourful spread of pan pizza topping combinations, no doubt is hard to resist. They sell their signature pizzas both by the slice and as part of boxed selections. Their bestseller is the Calabrese. “This area loves spicy,” he says, hot salami, banana peppers and green olives.”

On the staffing challenge
While things are ticking along at the pizzeria, with a staff of seven, Federici says they face the same major challenge other restaurants do. Finding good, long-term, skilled staff is a huge challenge, he says, noting that red tape makes it difficult to bring in skilled labour. He has used the government’s temporary foreign worker program, but says it is very complicated, time-consuming and expensive.

He says he talks about the difficult task of recruiting with other operators. “You have to find someone that’s able to do the job, wants to stick with you, is trustworthy and knows how to be sociable and still handle customers. There are so many aspects involved in hiring someone you want to grow with. It’s felt across the board in all restaurants.”

Education is key
Federici feels strongly that education – be it through classroom work, kitchen training, reading or travelling – is a key to success. He studied business administration, earning a joint degree through the University of Guelph and Humber College that combines business, entrepreneurial and marketing skills. “It was an excellent program that really prepared me for running a business,” he says.

For his part, he is passing along pizza-making pointers through a video tutorial website called www.raisethedough.com and an eManual he sells on Kindle for $5 as an extension of efforts – clothing and food drives, pizza deliveries – to help those in need.

The young entrepreneur sees a bright future for the independent pizzeria – if new operators go into business knowing the risks and sacrifices. “With the number of TV programs that show restaurant openings and innovations, and cooking shows, it’s glorifying the industry but not showing what really goes into opening and running a restaurant efficiently, so that you’re not closing your doors right away because you didn’t do your numbers properly or you weren’t properly educated going into it.”

He is pleased with Ciao Roma’s success but realistic about the rigours of running a small business, noting that consistency, knowing your numbers and staying on top of them are the main factors that lead to success.

There needs to be a strict ordering system and you have to keep waste to a minimum, he says, adding, “It’s those little costs that make or break you, especially when you’re starting out.”

For now, the shop seems to have hit on a formula that brings hungry, adventurous customers back for more.