Features In the Kitchen Marketing 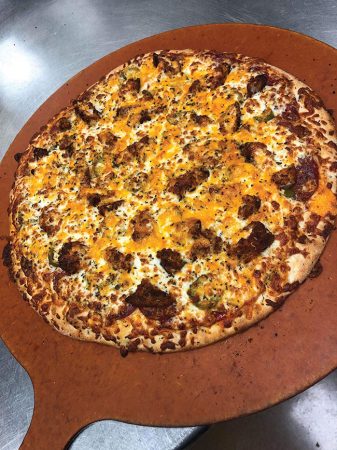 I have always been particular about my food, my preferences for the best have come naturally. When I was very young I was told I was a “picky eater,” and years later, after winning more than one top culinary pizza award, a family member joked that I’ve “always had sophisticated tastes.” And I am very passionate about gourmet pizza made with top-quality ingredients.

With this discerning taste for all things that I put in and also on my body, I like to research the ingredients, and also, the ingredients in ingredients. It’s interesting that this natural tendency of mine has been good for me both personally and professionally. More than a decade ago, by request, I developed a gluten-free pizza recipe when some of my regulars had celiac and gluten intolerance diagnoses and they and/or their family members could no longer eat wheat-based pizzas along with many toppings found upon them. Having already researched ingredients that can cause havoc with anyone with nut allergies, this was also an enlightening experience.

When I create a designer specialty pizza for my menu I like to play around with the build of the pizza. I am inspired by flavours and textures and I will play around with the layers and the textures and flavours of each ingredient until I’m satisfied that what I’ve created is a masterpiece of edible art. Sometimes I’ll get an inspiration when I’m driving, or doing some mundane task, and I make a play date time in the kitchen to try out the creation. Sometimes, in the middle of creating, I get an inspiration. I begin to make one thing and hear another ingredient whisper, “I want to play with those guys.” Voila, something new comes together.

The Diana-Saurus Rex came about with a segment of regulars who were asking for a “gourmet meat” pizza. Even though we already had the “All Meat” specialty pizza on the menu, some said they wanted more meat. So, the inspirational thought was, “If I was a T-Rex, what kind of pizza would I eat?” Seven premium meats with a heap of mozzarella and Monterey Jack cheeses on a beer crust later, the Diana-Saurus Rex was born.

Actually the Kung Pao Chicken was created in response to a challenge from one of my managers. He asked me to create a Christmas pizza, and said that it didn’t have to have the typical Christmas dinner foods as components. After I thought about it, inspiration came where I chose ingredients based on colour and taste. You’ll find both red and green peppers, red and green onions, Kung Pao chicken and pineapple on a bed of mozzarella cheese with an olive oil and herbs sauce. I have made this pizza for high-end wine and pizza pairing events and have had several hard-core pineapple-doesn’t-belong-on-pizza people tell me this pizza changed their minds. I agree that pineapple does not belong on all pizzas, but it plays nicely on many.

Ricky’s Revenge is a Trailer Park Boys inspired pizza. Years ago, my then-husband and I would watch the show regularly, and we wondered what Ricky’s favourite foods would taste like on a pizza. It definitely was a stretch at the time – chicken fingers on pizza?! Really?! But we tried it, with our premium dry-cured pepperoni, chicken fingers and jalapenos, loaded with extra mozzarella and medium sharp Cheddar and sprinkled with “special herbs” on top, on a beer crust, with our from-scratch marinara. It’s actually “*bleep’n amazing.” Back in 2007, Ricky, Julian and Bubbles actually came to my first location and enjoyed this creation. It’s still one of the most popular pizzas ordered.

You have to be willing to try new things, to stretch beyond your beliefs about pizza, and you have to be willing to fail. The thing about pizza that I have come to understand, is that some creations are not for everyone, and that’s OK. One afternoon I brought some slices of a new pizza creation home, offered some to my mom, who had been looking after my children. As soon as I listed the toppings, she immediately and emphatically said no. Another time I brought a different new creation home: with an olive oil and herbs sauce, seasoned french fries, gravy, farmer sausage, strip bacon, smothered with a garlic-and-chive Havarti and mozzarella cheese blend, and finished with diced dill pickles after being baked. It was a weird pizza creation day, but this one she loved, as did my boys. Personally, for me, as an artisan pizza chef, it doesn’t get much better than that.