Features Business and Operations In the Kitchen 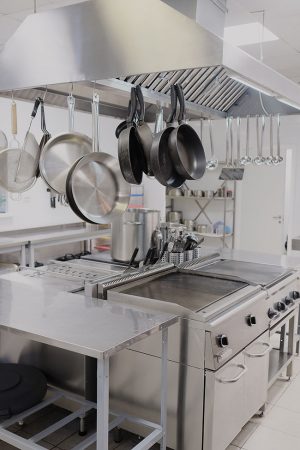 Ghost kitchens, virtual kitchens or cloud kitchens are names for the latest restaurant industry business model disruption. A ghost kitchen is defined as a restaurant operating often in a lower rent location with only a back-of-house team and no sit-down service. The front-of-house team is few in number and focused on interacting with the delivery services. With off-premise food consumption growing steadily for several decades now and delivery services consolidating and growing more powerful, the conscious uncoupling of front of house from back of house started to make economic sense. After the COVID-19 pandemic hit, off-premise consumption took off on rocket fuel and it looks like the next food fight will take place on the consumer kitchen table.

At the time of this article’s publication, the world is in the midst of a global pandemic. The restaurant industry has long been the canary in the coal mine, being the first to suffer any economic downturn. This health-care crisis has precipitated an economic crisis that would normally pose enough of a challenge. Throw in social distancing as the most effective way to fight the spread of the virus and the traditional restaurant business model (based primarily on physical proximity and active socializing) simply isn’t viable. Restaurants will survive as they have other pandemics in history, and we will dine in groups again. But it won’t be soon, and until it is safe to dine in, food consumption will primarily be off premise.

Restaurants are typically low-margin businesses with more than 71 percent of restaurants reporting profit margins of less than 10 per cent in 2019 according to Independent Restaurant Coalition. Also reported in 2019 by Angus Reid Global, in partnership with the Agri-Food Analytics Lab at Dalhousie University, 29 per cent of Canadians had ordered food using a delivery app at least once. Delivery apps make ordering easy for the customer, but they take a big bite out of the restaurant’s profits. It’s easy to see that restaurant margins were getting squeezed on all sides. Rent and payroll are the two big costs for restaurants and ghost kitchens are an effective way to mitigate these expenses.

A ghost kitchen doesn’t serve the public: it focuses on food preparation and connecting with the delivery service. In Canada, there are four main players in the delivery sector: UberEats, Skip the Dishes, DoorDash and Foodora. According to an article in the Globe and Mail, UberEats estimated having nearly 100 online-only ghost restaurants across Canada using their platform. Delivery apps are notoriously expensive for restaurants to use with many taking up to 30 per cent of the order value from the restaurant as payment, but this too is becoming more affordable. A Canadian startup called Helcim out of Calgary has created an affordable food-ordering app and payment processor that they are offering restaurants for free for the first six months to help businesses survive these tough times. As of summer 2020, UberEats has acquired Postmates, giving it dominant market share in the U.S. There are likely more delivery service alliances to come. Mergers are good for keeping costs down because bigger companies can drive efficiencies more effectively because of scale. Hopefully these big delivery services will become more affordable for restaurants.

This new model feels more like a production line than an elegant dining experience, but it is more profitable and aligned with the delivery services.

When food consumed away from physical restaurants was a smaller piece of the restaurant revenue stream, the high cost of delivery services was easier to absorb. According to Restaurants Canada, prior to the start of the COVID-19 pandemic, 70 per cent of breakfasts, 48 per cent of lunches and 56 per cent of suppers were eaten off-premise. As people sheltered in place and takeout became the only option, a trend that was already in motion gained speed. Until there is a vaccine, accurate and easy testing, or a cure for the coronavirus, on-premise dining will not return to its pre-pandemic levels. Off-premise consumption is here to stay.

A ghost kitchen will often choose a lower-rent location such as an industrial mall or warehouse to set up operations and the final tab for this model can cost only tens of thousands of dollars to mount as opposed to the hundreds of thousands of dollars a full-service, sit-down restaurant can cost. Many ghost kitchens are operating with line cooks rather than more expensive chefs because the menu changes less frequently and recipes are not as complex as they might be in a full-service restaurant. This new model feels more like a production line than an elegant dining experience, but it is more profitable and aligned with the delivery services.

Recipe Unlimited (formerly known as Cara Corporation) has opened its ghost kitchen arm called Ultimate Kitchen recently. The company uses the main kitchen to produce food for its brands including Swiss Chalet, East Side Mario’s, Montana’s, New York Fries and Harveys. Though a third-party app is currently being used for delivery, the company is reportedly considering launching its own delivery arm. The customer has six brands to choose items from (pleasing everyone in the family) and the company reduces costs.

It’s also not uncommon for several different restaurants to operate out of the same ghost kitchen location. Think of it as a co-working space for restaurants. A company may set up the ghost kitchen and lease the space to restaurants to cook out of. The restaurant supplies its own equipment and labour and pays a membership fee to the company operating the ghost kitchen. The ghost kitchen company often also provides the technology to take the orders by app and they also supply the staff who liaise with the delivery service. The restaurant gets to focus on the cooking. One such company spreading across the U.S. is called Cloud Kitchens, founded by Travis Kalanick, co-founder of Uber. Google and Amazon are also eyeing up the market. The Canadian ghost kitchen landscape is growing as well but these bigger companies have yet to penetrate the market here. The growth is coming from restaurants opening locations themselves or running a ghost kitchen from their existing location – minus the sit-down dining.

A ghost kitchen might make sense for your operation if you have several locations that could benefit from one production source or if you want to expand without the big cost and risk of another location. Collaborating with other local restaurants to share a ghost kitchen might also be a cost-effective way grow your delivery operation apart from your sit-down dining. If you all used an affordable app like Helcim and shared the cost and efficiencies of the labour for delivery, it could be a viable model. The delivery driver would be going to one location to pick up orders and chances are that your customers are often in similar neighbourhoods so it’s a streamlined process.

Removing the culinary artistry and the server to customer interaction from the dining experience may feel like we’re stripping the most important things out of the equation, but it’s probably wise for us to realize there are different customer dining motivations. Some want the dining experience and some just want the food. Having these channels separate allows you to focus and do each of them well. Unfortunately for the foreseeable future – sit-down dining will need to be on life support.

Michelle Brisebois is a marketing consultant specializing in e-commerce and digital content strategy and retail/in-store activation. Michelle has worked in the food, pharmaceutical, financial services and wine industries. She can be reached at michelle@textrixconsulting.com.