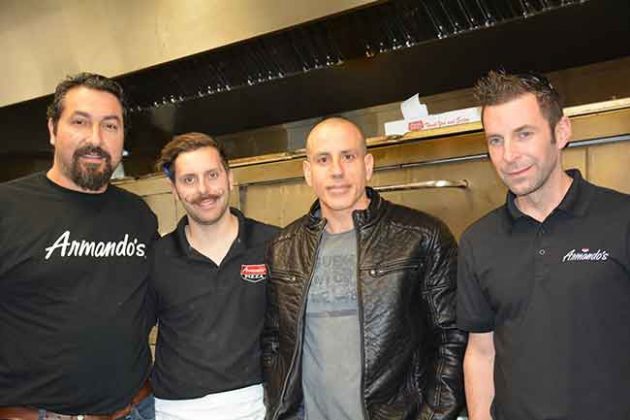 What is Windsor-style pizza?

It’s a question at the top of my list as I walk into the warm, glowing, dark wood interior of Armando’s Pizza’s Cabana Road dining room. I’ve heard the phrase many times and recently read of a Windsor-style pizzeria taking root in faraway Calgary. Clearly it’s a thing, and I resolve to define it.

We talk about the Windsor chain’s signature pizza, the Super. Known in other places by other names – the Special, the Canadian – it features pepperoni, bacon, mushrooms and green peppers.

Vallieres provides an opening for my question in no time flat. “Our bestseller is probably the king-size pizza,” he says. “It’s that Windsor differentiation. Every company does a large but we do the big, rectangular, football-sized pizza.”

“That Windsor differentiation” hinges on five elements: the square or rectangular shape, the large size (18-inch square or 18- by 26-inch rectangular), the use of corn meal in the crust, the addition of canned mushrooms and, most important, the shredding of the pepperoni.

“You know about the pepperoni, right?” Pizzo says. They tentatively trace the style to Volcano’s pizzeria, which was shredding pepperoni in the 1950s and ’60s and spawned many imitators.

Size is another important factor. It’s tricky to teach people to make the big pizza, Litster says. “You are hand-stretching it from a three-pound ball of dough. You roll a little just to get the shape but you don’t roll over the edges.”

It seems fewer and fewer people make pizza by hand these days. “It’s hard to find someone who makes pizza the way we make it,” Gerardi says. The use of screens, conveying ovens, rolling pins and dough sheeters is common now, he adds, “but it compresses the air out of the dough and you don’t get that rise.”

The original owners, Armando and Antonia Gerardi, are Gerardi’s parents and the heart of the ever-expanding company.

Armando and Antonia emigrated from Italy in the 1950s with Armando’s brother, Filippo Gerardi, who ran Italia pizzeria. Everyone around the table agrees that Italia, which is no longer in business, is the main branch in the Windsor pizza family tree from which other area pizzerias have stemmed.

Gerardi credits his uncle Fil with giving his parents their start in the business. Armando worked for his brother while Antonia worked as a hairdresser. In 1967 Gerardi’s parents opened Armando’s Pizza in a former fish and chip store on Walker Road.

“That’s how it all started,” Gerardi says. “I give them a lot of credit because they came to this country with nothing and became very successful. John and I have grown the business from there.”

Gerardi began making pizzas when he was five years old and has always worked in his parents’ restaurant. “As a child I did it because I thought it was fun. I’d hop up on a pail and start making pizzas. It’s still fun but it’s a different kind of fun.”

Pizzo started working at Armando’s in 1996 after answering an ad in the Windsor Star for a pizza maker.

While working there on weekends, he started dating Gerardi’s sister, Josie, whom he would marry later that year. “The rest is history,” Pizzo says.

The restaurant at Dougall Avenue and Cabana Road was their second location. Later christened Johnny Piez and co-owned with Senol Eskici, the store focuses on gluten-free and take-and-bake pizza.

The chain now has 12 Windsor-area locations ranging from the 200-seat Cabana Road location to a small outlet in the Windsor Family Credit Union Centre – home to the Ontario Hockey League’s Windsor Spitfires.

“You can go to the main location on Walker Road and catch Armando tossing pizza dough,” Vallieres says. “He loves getting his hands dirty. And you’ll often see Antonia working the floor if that’s what’s needed.”

“They really have a passion for it,” Gerardi says. He describes his parents. “Dad has a good sense of humour. It’s Mum who whips everyone into shape,” he says.

He paints a vivid picture of Armando sitting and cutting up a huge block of cheese with a knife. “It would take my dad all afternoon,” he says. “That’s just the way it was.” He says his dad still can’t get over the efficiencies brought about by using new equipment like the large mixers.

The business seems to thrive on change and there have been many other developments over the years. The Walker Road location itself has been through a couple of remodels.

“When you mention the name Armando’s, a very big percentage of people still think of that original location,” Vallieres says. “It’s the home of Armando’s and it still feels that way when you go there.”

Armando’s has been expanding steadily since 1996 and the team now oversees a half-dozen corporate locations. It’s been a successful if somewhat slow climb. “It’d be nice if it were a little faster,” Pizzo admits.

Franchising has been a good route for the team to speed up the pace of growth. “It’s a good way to get our name out there more quickly,” Pizzo says.

But it’s important to match the location with the franchisee, Gerardi says. “Some franchisees aren’t comfortable with tackling a dining room. It’s a big animal.”

That same individualistic approach to different locations extends to their corporate chefs and right on down to entry-level employees.

As managers they allow their corporate chefs a fair bit of freedom. Chefs are required to follow the signature recipes. Beyond that, they can add their own specialties and buy ingredients from whatever source they choose. “We let the chefs have their own location and identity – we love to do that,” Pizzo says.

With so many restaurants in such a concentrated area, it’s important they have their own character and specialties to give customers some variety, Pizzo says.

“But keeping your product consistent is a big challenge too,” he says. That’s why they serve signature dishes like lasagna and chicken parmesan, and signature pizzas like the Super, Johnny’s Favourite and the Hawaiian, at all locations.

They also encourage their chefs to show their creativity by competing in events like the Canadian Pizza Show and the International Pizza Challenge.

Armando’s had a big year in 2014 at the International Pizza Expo in Las Vegas when four of their pizzaiolos – Pizzo, Litster, Senol of Johnny Piez and then-corporate chef Marco Malizia – finished in the top 5 of their respective divisions.

“That was a good year. It created quite the buzz when we came home,” Gerardi says.

With employee numbers pushing 300, the team knows it’s important and a constant challenge to find workers that are a good fit. Vallieres and Litster do the lion’s share of the hiring.

“The labour relations piece is huge in this day and age. Staffing is hard to come by,” says Vallieres, a marketing specialist who has been with the company for 12 years and generally works out of the Essex location.

They recruit through job fairs that they advertise in the local newspaper, on posters, on the classifieds website Kijiji, and via social media.

“I look for energy, for someone with a personality and a smile. I can teach you a lot of things, but I can’t teach you to smile and to want to be here,” Vallieres says.

Litster, who does hands-on training at various locations, says he started with Armando’s grinding cheese in the basement as a young teenager 14 years ago and worked his way up through the ranks. “You work every position, pretty much. It’s good: it has helped me to relate to other employees,” he says.

“Dean’s got a knack for teaching,” Gerardi says.

Which aspect of the job gets employees most excited? “We use the big knife with a 16-inch blade,” Pizzo says. “Employees see Dean or John or Andre using it and they want to try.”

“There is a bit of romanticism to it,” Vallieres adds.

Vallieres says they favour a diversified approach to marketing, reaching out through direct mail and through social media. They offer a monthly special. They work with the sports centre. They brand using boxes, take-out materials, bags and containers. “Direct mail is still big and still the most reliable way to measure your marketing program’s success,” Pizzo says.

This covering of all the bases is reflected in their marketing material. An inviting website, matching flyers and friendly tagline – “Our place or yours?” – remind customers there are several ordering options. Among the different locations, customers can dine in a large or small sit-down restaurant, order take-out, pick up take-and-bake, get gluten-free, order home delivery or have an event catered.

And if they happen to live outside the area, they are no longer out of luck. In recent years London and Kitchener have gotten a taste of Windsor pizza. The team opened Veloce Italian Kitchen – inspired by the two passions of car racing and traditional Italian cooking – in London in 2013 and Waterloo in 2015. It’s a scaled-down concept serving pizza and pasta.

Not wanting to confuse customers or dilute their original Windsor brand, they started a whole new brand using the same recipes. “We thought that might be better for expansion. Now we’re thinking we should do the same thing with Armando’s,” Pizzo says with a laugh.

Vallieres seems to like the idea as well. “It might have a little smaller footprint, simpler operation, smaller everything,” he says. “It would concentrate on turning volume as opposed to having these big properties.”

They are talking about doing smaller take-out locations like their 2,200 square foot standalone with a small dining room in nearby Essex – a good example of a streamlined operation. With operating costs “going through the roof lately,” Pizzo says, it’s tempting to open more 1,000 square foot stores, which would be less expensive to buy and smaller to maintain.

We tour one such smaller-footprint location just steps away across the parking lot in the same plaza. Last December, in an effort to streamline operations, they opened this take-out counter and well-equipped kitchen as central supplier for all locations. Before then, dough and sauce for other locations were prepared in the busy Cabana Road kitchen.

The Armando’s team always seems to be one step ahead of customer demand and on the lookout for ways to be more efficient and more convenient.

Whatever their next move is, you can be sure it will be done on their own terms and with family tradition in mind.