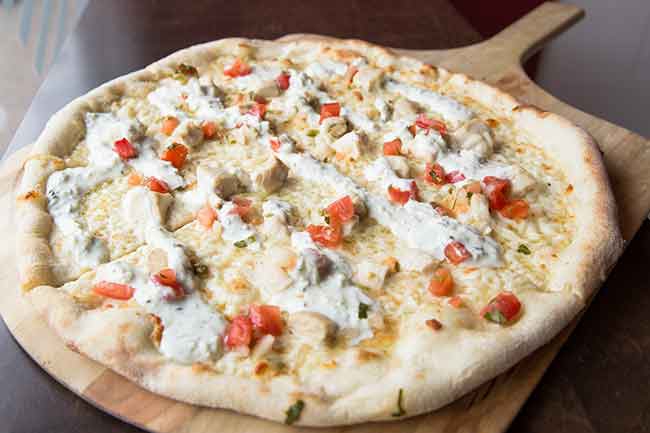 With immigration behind two-thirds of Canada’s population growth from 2012 to 2013, it’s not a great leap to anticipate growing customer demand for toppings associated with the many culinary cultures that make up the mosaic that is Canada. In fact, the taste for adventure is so common these days among all cultures that U.S. trend watcher Baum+Whiteman has a name for it: “restless palate syndrome.”

In Canada the pizza market is more competitive than the Olympics, which means that pizza makers need to ramp up their game with new and exotic ways to make our old favourite. One way to do this is to add toppings that may have been seen as unusual several decades ago, but with the growing exposure to and appetite for food from different cultures, now seem quite logical.

“According to MenuMonitor data, the leading pizza ingredients on Canadian menus are cheese, mushrooms, onions, tomatoes and pepperoni. Some of the fastest-growing pizza ingredients (in the latest year-over-year period) are parsley, red sauce, avocado, Canadian bacon and peppers,” says Kristin Menas, associate editor for the Canadian Food Industry at research firm Technomic. Menas went on to add that the fastest growing proteins on pizza are meatballs, Canadian bacon and pancetta.

Canadians are cautiously trying new and exotic foods. “Overall, only about 26 per cent of consumers are eating more unique types of ethnic foods and beverages now than two years ago. When it comes specifically to pizza, just about one out of three consumers say they are likely or extremely likely to order ethnic foods/flavours for pizza,” Menas says.

Some chains are stepping out of the pizza box even more. Pizza Hut, for example, introduced a new curry crust in 2014 with the slogan “Get Curried Away.” The company also had flavours such as sriracha sauce, which comes from Thailand, and they introduced “drizzles” such as balsamic vinegar and even ginger flavour.

In Canada there are some incredible independent pizza makers that are challenging our tastebuds, including Pizza Master Fusion in Calgary. “We bring together traditional Indian toppings and seasonings. Our number 1 pizza for the past five years has been the Punjabi Veggie Master topped with traditional toppings including Roma tomatoes, red onions, red and green peppers, mushrooms, spinach, jalapenos, mozzarella cheese and tomato sauce. What takes this pie to the next level
is adding a mixture of Punjabi-inspired seasoning, garlic, ginger and garnished with fresh cilantro,” says Kiran Dhaliwal, owner of the pizzeria.

Dhaliwal believes Canadians are looking for change when it comes to dining out, and this appetite extends to pizza. “I think Canadians are demanding food establishments to challenge the traditional palate. The best way to do this is to introduce unique pizza toppings and seasonings to traditional food items. For example, even our sides can be ordered as a fusion dish. We offer Punjabi chicken wings as well as waffle chips tossed in chaat masala – it just kicks the tastebuds up a notch and our customers love it!”

Za Pizzeria in Toronto is doing things to the beat of their own drummer by trying some bold new ingredients. “At Za we not only pride ourselves on being unique, but also we like to elevate the standard classic pizza while still keeping it approachable,” co-owner Lisa Costantini says.

Chef and co-owner Jason Costantini draws his inspiration from a multiplicity of cultural cuisines, for example, the Za-vlaki, which offers a Greek twist. Za’s signature crust is coated in a thick spread of garlic butter, with roasted chicken, fresh pico de gallo salsa, and tangy tzatziki on top.

Other innovations include using porcini cream as the sauce in their mushroom pizza along with mozzarella and goat cheese, sautéed mushrooms and brushing the crust with garlic oil. One of their most distinctive pizzas is the Oh Canada, which has maple syrup, mozzarella cheese, crispy bacon and is topped with potato chips. “If you’re feeling even a little more adventurous and that’s not unique enough for you, then head over to our monthly rotating Features menu, where depending on the month you can find pizzas such as our Duck & Grape, Salmon Tartar, Strawberries & Cream, or our most popular Big Zac – Za’s version of a Big Mac: cheddar cheese house-made mini patties, shredded lettuce, pickles, diced onions, Za’s mac sauce and of course a brushed brown butter crust,” Lisa Costantini says.

When introducing new flavours and cuisines, you may want to combine them with the familiar. Technomic’s research suggests that, despite their curiosity, unfamiliarity with ethnic ingredients can deter some consumers from trying new dishes.

As operators incorporate less recognizable ingredients into their menus, they must balance new, unique options with traditional and familiar ones, the company said in its “2015 Canadian Ethnic Food and Beverage Consumer Trend Report.” This might include educating staff and using descriptive and bilingual menus to encourage purchases, the report suggests. As to where pizza may be headed in our corner of the planet, the last word belongs to the researchers at Technomic. “In the most recent quarter, we began to see ethnic-inspired regional American cuisines appear on Canadian menus, ranging from jambalaya to Cajun-spiced meats. This trend could easily be applied to pizzas with toppings like Cajun spices, andouille sausage and spicy seafood,” Menas says. According to the trend watcher, Jamaican inspired jerk spices will be a thing because of their growing popularity in Canada.