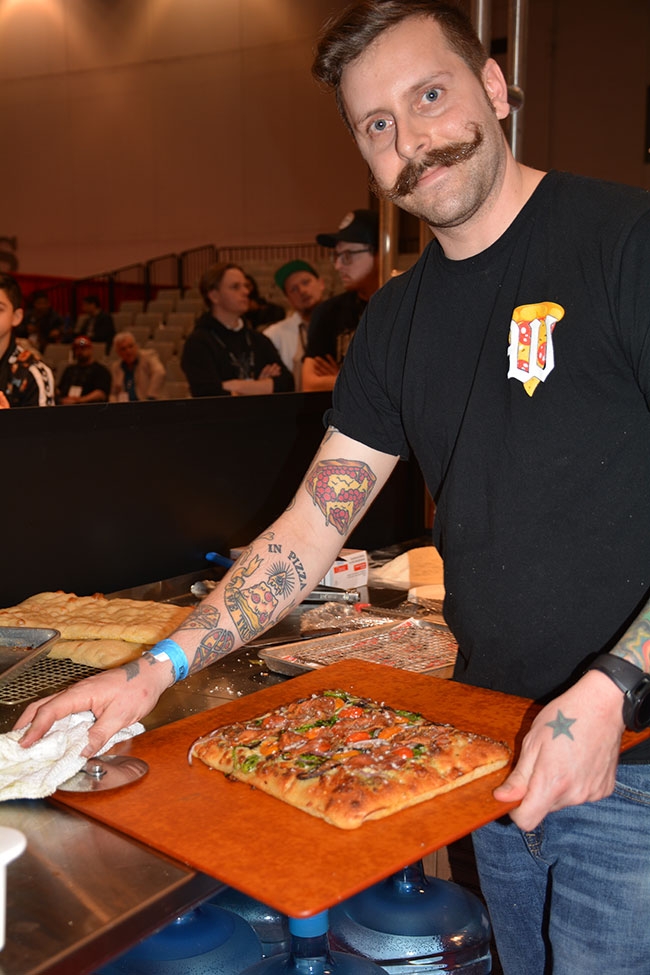 Not wanting to mess with perfection, Chef of the Year Dean Litster made “the exact same pizza” he made at the Canadian Pizza Summit for the International Pizza Expo’s Pan division. The Dean Martin earned him a spot in the top five in Las Vegas!

Anyone who got their start working in a pizzeria will get a kick out of Dean Litster’s story.

Litster, our Chef of the Year – Open, started his working life like so many young people do, working in a pizzeria. He is among thousands of young Canadians who got their first jobt in food service.

After 17 years with Armando’s Pizza in Windsor, Ont., Litster has earned his place among the stars of Canadian pizza.

You won’t meet a kinder, humbler person. And you won’t meet a prouder showman on the pizza stage – in Canada and abroad. On the competition floor he is the same nice guy but he is also a laser-focused competitor with one thing on his mind.

You might be surprised to learn that thing is not winning. It’s making the very best pizza he can make.

Litster did just that during the Pan division competition at the International Pizza Expo in Las Vegas in March.

But make no mistake, beneath that calm, tattooed, moustachioed exterior lurks the heart of a chef determined to win.

Let me set the scene: A small crowd gathers eagerly round a deck oven as a young man sporting impressive pizza-themed tattoos reaches in to check on his colourful deep-dish pie. Onlookers are surprised to hear him ask the pizza, “Are you ready to show the world who you are?” With great care he lifts its thick edge, slides it onto the paddle and brings the aroma-rich pie into the open and ready to present to the judges.

“I feel like this is the best one I ever made,” he says of the pizza that earned him fourth place among 20 pizza makers, his second top-five finish in Vegas (the first was in 2014). Afterward, we talk outside the exhibition hall at Pizza Expo.

“This is a big deal for me,” Litster says with a calmness that belies that sentiment. And as I hear more about his career journey, I begin to understand.

‘EVERYTHING I HAVE CAME FROM PIZZA’
Litster has been making pizza since he held his first job at Armando’s at age 14, where he ate with his parents as a kid.

“I was just looking for my first job. I wanted a paycheque,” he says matter-of-factly but with a hint of awe at how far that job has taken him. “In the early years, I rode my bike to work because I couldn’t afford a car.”

He went to college for radio broadcasting but returned to the restaurant industry. Yet still he had occasional doubts. “I wondered for years if this was really what I want to do,” he says.

The hard work began to pay off, as Litster was given a chance to move up in the company and eagerly took it. “I was given a clear path to success,” says Litster, who has worked in pretty well every position at regional chain Armando’s Pizza, from prep person to head chef to partner with John Pizzo, Andre Gerardi and Larry Vallieres in the Cabana Road location in Windsor. He also owns a location in Amherstberg.

He credits Armando’s with giving him “constant support, mentoring and opportunities.”

“I spend my days developing recipes, weighing out dough ingredients, kneading dough balls, stretching pizza dough and cooking pizzas,” he says. “Every day I pass on my tips, tricks and passion for pizza to the next generation of pizza makers. It really is a lot of fun to do what you love every day!”

“Everything I have came from pizza,” he says.

Litster is especially grateful to Pizzo for giving him opportunities to succeed, words of encouragement and constructive criticism.

“John is good at telling me how to be better,” he says with a smile. “It’s not often you get a boss who wants to see you outshine him. That’s what John is like.”

TEST, TEST AND TEST AGAIN
Taking that encouragement to heart, Litster constantly works to improve the dough. Sometimes that happens on his day off. “That’s when it’s quiet,” he says. He takes the ideas John gives him and implements them. The chef likes nothing more than to experiment with dough and create new products.

He is a big believer in testing those products. To prepare for our Chef of the Year competitions, he made four different pizzas and asked his staff to test them. The Dean Martin is the one they liked best, so he continued developing it.

That pizza won him Chef of the Year in Canada and he replicated it for Expo. “I decided not to mess with perfection,” he says.

“To make a killer pizza, you need patience,” he adds. “Pizza is like a kid.”

That patience serves him well as he trains and oversees 35 staff at Cabana Road.

It also helps him take a deeper look at potential new hires. “I’m looking for someone who has experience,” he says. “I have to see something in them. I want someone who cares, who will pay attention, who will ask questions if they don’t understand.”

“We believe in treating employees right. “I’ve done this for 17 years, and years of experience gives you perspective. It’s made me a better person.”

Not wanting to mess with perfection, Chef of the Year Dean Litster made “the exact same pizza” he made at the Canadian Pizza Summit for the International Pizza Expo’s Pan division. The Dean Martin earned him a spot in the top five in Las Vegas!

MEDIA SAVVY
Known as Professor Zaaa (@professorzaaa) on social media, Litster knows how to promote his brand, Armando’s brand and the Windsor-style pizza brand. He often sings the praises of Armando’s within the Windsor area (Windsor-Essex Tourism recently gave Armando’s the Best in Windsor Essex Award for Best Pizza Pie) and a keen spokesperson for Windsor-style pizza when abroad.

“If you want people to know what you do, you have to tell them,” he says.

His best advice about working with the media? “Contact every local paper you know and don’t go away. Be persistent. Local media are best because those are your customers.”

After winning Chef of the Year, Litster shared his story with the Windsor Star and was the subject of a feature article.

To foster good publicity and to feed his own creativity, he creates a pop-up pizza once a week to complement a “secret drink” announced weekly by local craft beer and cocktail bar The Blind Owl. The beverage is different every week and revealed to him only on the day of its promotion. Again he uses his tried-and-true method of testing pizzas on staff. “I ask everyone what pizza would go with that drink.”

Armando’s regularly sends Litster and other staff to events like the Canadian Pizza Summit and Pizza Expo, and Litster says he gets a lot out of attending. “You have to have an open mind,” he says. “Events are good places to get ideas and topping combos. It’s about adding that one little thing that improves your pizza.”

Litster has three personal and professional goals: attend Tony Gemignani’s pizza school, win his division at Pizza Expo and beat out other division winners to win Pizza Maker of the Year. With all that he’s done, those goals seem within reach.

“Pizza’s limits end only with your imagination,” he says. “I don’t want to keep the status quo.”

THE DEAN MARTIN
By Dean Litster

This pizza is a new style of pizza Chef of the Year Dean Litster likes to call a Windsor-Style Deep-Dish.
“In the bottom of the pan I sprinkle a light layer of cornmeal (that’s what makes it a Windsor-style),” Litster says