2011 Pizza Maker of the Year Carmelo Oliveri made a crust representing the flag of Italy during the Blind Box competition at the International Pizza Challenge in Las Vegas March 26. 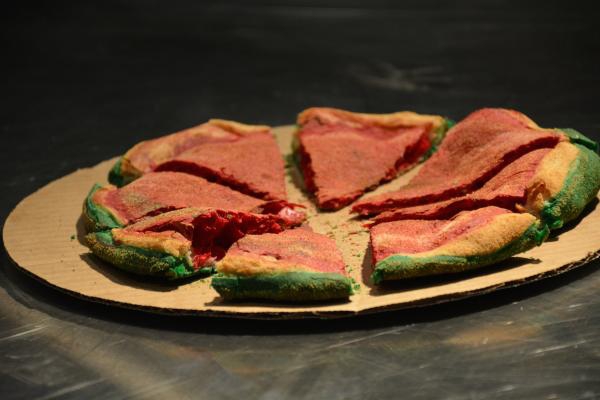 It might be an attempt by northern pizzeria owners to get away from the nasty weather, but Pizza Expo attendance is up this year according to organizers.

In particular, there was unusually high attendance at the Monday new-operator sessions, perhaps a sign the industry as a whole is thriving.

Plenty of Canadians stopped by the Canadian Pizza booth to say hello and wave the flag a bit. The Muntains, last year’s Pizza With Purpose winners, stopped by to say hello, as did our Chef of the Year Carlo Raillo and wife Kayla Wyntjes, and runner-up Vito Dachille and his team from Enoteca Mozza Pizzeria Moderna.

Vito handled himself like a pro at his first International Pizza Challenge, creating a dreamy Calabrese pizza featuring a mixture of Calabrese sausage and nduia and caramelized onions in the Traditional preliminaries on Tuesday. Vito did not make the stiff cut to four pizzaiolos who will advance to the finals on Thursday but he was happy with his pizza and smiling throughout the process, as were the gang of tasters who snapped up his pie.

Carlo competed Wednesday in the Non-Traditional category with his Cappuccino pizza. Created and served at about 10:30 a.m., it made for a wonderful breakfast for a lucky few who got to sample the light, crispy cocoa crust. Carlo’s dessert pizza will be judged alongside such innovations as duck and reindeer pizza, so it’s anyone’s guess how the judging will go. Stay tuned to Canadian Pizza’s website for details as we receive them.

We took in some fantastic seminars on catering and dough do’s and don’ts – along with demos by Tony Gemignani (Sicilian-style pizza) and Glen Cybulski (chicken pizza) and we’ll share more with readers in future issues of the magazine.

Tonight at the Pizza Block Party, publisher Christine Livingstone will help judge the World Pizza Games finals. Canadian Pizza will have more on the evening, photos online and a show wrap-up in the March/April issue. Don’t miss it!