Some 150,000 Canadians can’t eat traditional pizza; but there is one way to capture that market.

Some may take it for granted; but there are others who
simply look at the incredible pies we create and long for the
opportunity to taste them.

Lots Of Love For ‘Free’ Pizza 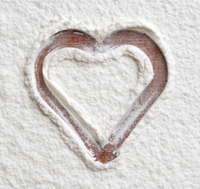 Some may take it for granted; but there are others who simply look at the incredible pies we create and long for the opportunity to taste them. Sadly, that taste will never come – not without pain anyway. These are the people in our midst who have, in layman’s terms, wheat allergies. Their ability to consume foods that contain gluten is missing.

In Canada, some medical research estimates that as many as one in 200 people have celiac disease. This is the condition where the lining of the small intestine is unable to digest foods containing the gluten protein. Some pizzaiolos might be thinking, “So what?” While one in 200 are thought to have the disease, recent research believes that the number could be many times higher, and undiagnosed people may simply avoid foods – such as pizza – because of the discomfort it may cause after consumption.

Doing the math, one in 200 (at current research levels) translates into a market of 150,000 Canadians that knowingly cannot eat pizza today. That’s equivalent to having a mid-sized city with absolutely no pizzeria serving it.

South of the border, the numbers are skewed due to the dramatic different in population. But that didn’t really matter much to Peter Spellman, a pizzeria owner from the Brentwood area of Tennessee. Spellman, whose “normal” clients have included country music sensation Sara Evans, turned his eye to the celiac market and launched a separate business shipping gluten-free dough across the United States.

The market potential to Spellman clocks in at 15 million people with gluten intolerance, and seven million with a wheat allergy. Even a fraction of that market will greatly offset the complaints over an increase in cheese prices.

These are people who are hungry for the indulgence, Spellman said during a recent pizza production course at the American Institute of Baking. Spellman was drawn to attend specifically for the section on gluten-free products.

Because food options are extremely limited, Spellman recognized quickly that there is an exceptionally high level of brand loyalty – almost 97 per cent.

Spellman divided his pizzeria into two businesses: the more traditional take-out shop managed by his son, and an online pizzeria specializing in the gluten-free doughs. 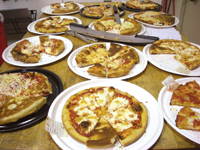 Eric Shinsato, whose company has developed a modified tapioca starch, told those in attendance at the AIB that people with gluten intolerance or celiac disease are desperate for new products that have a palatable flavour profile.

“If you ask people who have this, they will tell you they want something that tastes good. The number 1 thing these people want is a better tasting product. Their current food choices are limited.”

And while Shinsato says the gluten-free market on a broad spectrum remains a niche market, more and more children are being diagnosed with food allergies and that translates into a more challenging
approach to school marketing.

“Ten years ago this was far-removed from the mainstream, but medical awareness is increasing,” he says. “Consumers are now asking ‘What’s in this that is going to hurt me?’”

Diana Coutu, Canadian Pizza Magazine’s Pizza Chef and two-time Chef of the Year, adds that the market is bigger than what most pizzaiolos may think – because it’s not just the people with gluten intolerance that are affected.

“Spouses and other family members also miss out on pizza because they won’t buy it.” Imagine the unfairness at the dinner table, she notes, if some are eating pizza and the person with the wheat allergy cannot, especially if that person is a young child.

For George Schofield, president of the Briden Group, which operates Pizzeria Prego in western Canada, the venture into gluten free was not without its challenges.

“Being the only purveyor of gluten free pizza in Edmonton creates its own share of headaches since people from all over the city will call us for delivery service. We have had to introduce a premium surcharge for delivery to outlying areas far outside our normal delivery radius. We have people from as far away as Red Deer (150 km) phone ahead for gluten free pizzas – some cooked, some not – for pick-up once or twice a month,” he told Canadian Pizza Magazine.

While his pizzerias have made specialized dough for several years – regular and whole wheat since 1978, herb garlic, sesame flax and sunflower pumpkin seed since 2000 – the move to gluten free came after some prompting by the owner of a health food store.

According to Schofield, the retailer’s dealings with customers and their health concerns convinced him there was a market for gluten free selections in restaurants.

Pizzeria Prego developed a partnership with Jerry Bigam, owner of Kinnikkinnick Foods, an accredited manufacturer of gluten free foods and an exclusive supplier to Disneyland for gluten free products. “Jerry’s experience with the gluten free market afforded us a running start; we buy our guaranteed gluten free pizza crusts from Kinnikkinnick and then use dedicated pans, utensils, sauces, cutting boards etc to ensure we don’t facilitate cross-contamination.”

Staff at the pizzerias are given intensive training on cross-contamination and the ramifications it can wreak on consumers’ health.

“Since we use a dedicated portion of our front-line under counter cooler for storing gluten free products, we minimize the chance for confusion by having the dedicated pans adjacent to the food prep area. Orders for gluten free pizza are clearly coded on our guest checks and the protocol for making the pizza is strictly adhered to.”

Shinsato believes this is where the independent pizzeria operator can make a huge impact. With a higher level of interaction with the customer, the level of trust can be established.

“The other side of this business is we are the people pushing products on the consumer; gluten-free is a market where the consumer is saying to us, ‘What have you got?’” •