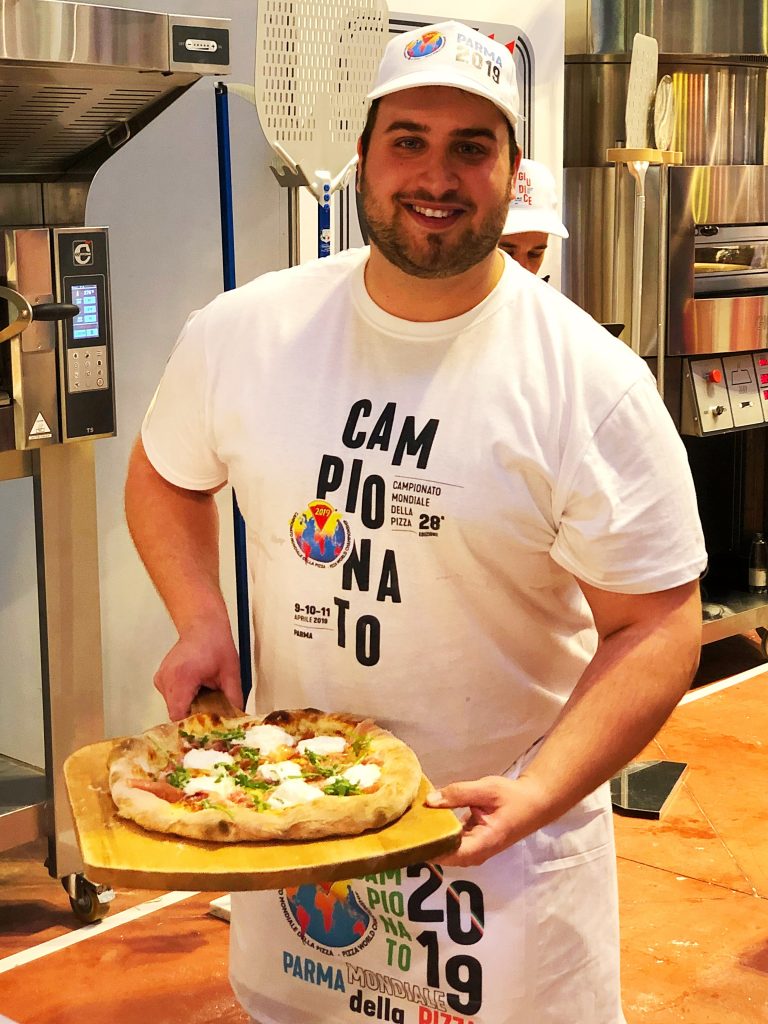 Schneider shared details about his experience at the annual Campionato Mondiale Della Pizza, held in early April. “This was my third time competing in an organized pizza-making competition, but with this being the World Pizza Championships, it was still a little nerve-wracking,” the pizza chef said. At Timmy Tom’s we use a custom blend of Bothwell cheeses, so I brought this cheese with me all the way to Italy. Consistency is very important to me, so I wanted to stay true to the brand.

“The pizza I made in the competition started off with spicy honey as the base topped with our custom mozzarella blend. After the pizza was cooked I topped it with burrata cheese mixed with a little truffle salt, prosciutto di Parma, arugula, lemon zest and Parmigiano Reggiano aged 36 months.”

Schneider also told us about his career in pizza, including an important stint as a franchisee.

“I started my pizza career at age 15, working at Doughboys Pizza on Pembina Highway in Winnipeg,” he said. “This is where my love for pizza started. I worked for Mick Rossi, who had his family and friends working in the restaurant with him. It was a great environment and I enjoyed working there. I continued to work there throughout my university degree.”

“At 19 I started looking at possible franchises to gain some business experience. I must have looked at over 60 of them and landed on Papa John’s Pizza due to their incentive program and the fact that the founder was the CEO and extremely active in the company.

“I moved to a small town outside of the Dallas–Fort Worth area and opened my first franchise. A year later I opened up a second location. My dream was always to open up my own pizza restaurant one day and I thought this would be a great place to gain some business experience.

“In 2015 I sold both locations to move back to Winnipeg to open my own restaurant. I was fortunate enough to team up with my friend Matthew Tallman of Trans Canada Brewing Company and opened up Timmy Tom’s Pizzeria inside of the brewery.

“Before opening, I decided to attend Tony Gemignani’s International School of Pizza in San Francisco. There I was certified in American, Classic Italian and Neapolitan pizza styles. Learning from Tony and his amazing team members Laura Meyer and Thiago Vasconcelos, my eyes were opened to so many different styles of pizza that I had no idea where to start. The style of pizza I chose to do at Timmy Tom’s I would call a mix of New York-style with a hint of Italian.”

Perhaps as exciting as winning the award in Parma was earning a place on the World Pizza Champions team, of which Gemignani is a founder, along with Michael Shepherd, Siler Chapman, Joe Carlucci, Ken Bryant and Sean Brauser. Team members tour the world competing as a team in different categories in many events.

“I got the pleasure of going with them to Italy and got to see firsthand what a great group of individuals they are,” Schneider said. “They are always willing to lend a hand or give advice where needed, openly sharing their recipes and how they make their unique styles of pizza.”

The entrepreneur was asked to join the team after his win in Parma and he couldn’t be happier. “I am very honoured to be on a team filled with such amazing and gifted pizza makers.”

Schneider will compete in the Open division of the Chef of the Year Competitions at the Canadian Pizza Summit in Toronto on Oct. 21.