The 17th annual World Pizza Championship games were held in Salsomaggiore, Italy once again this past April.

The 17th annual World Pizza Championship games were held in Salsomaggiore, Italy once again this past April.

Salsomaggiore is a little town in the Parma region about two and a half hours south of Milan and the town is famous for three things: hosting the World Pizza Championship Games, hosting the Miss Italy contest and the amazing natural salt spring baths. 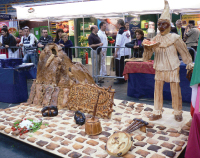 This was my third year competing in the Pizza Classica category, and having learned from past experience, I chose to keep my pizza simple. In any competition that I go into, I create a pizza that caters to the market in which I’m competing.

During interviews with various media, I’m often asked which is better, and I always give the same answer: whatever sells in your market is best for that market.

Some pizza makers enter the same pizza every year and try to improve on the bake and the overall score, while others’ create a new pizza every year. It all depends on the individual’s strategy.

One pizzaiolo from Finland brought venison to top his pizza. I wasn’t sure if the judges were impressed or grossed out as he told them the story of how he hunted and killed this deer with a bow and arrow. Then he went on to tell them about how he prepared the venison they were eating.

I’m pretty certain that it didn’t have the effect he was looking for. He even brought the antlers to decorate his presentation cart.

Decorating the presentation cart is also a competition category in Italy. It might not make much sense to us in North America, but as one pizzaiolo pointed out, Italy is the home of Da Vinci and many other famous artists.

It’s only natural that there would be a competition category for creativity and while the pizzas are simple, the display carts are incredible works of art usually made entirely from pizza dough.

This year I created my version of a popular Italian pizza, the “Quattro Fromaggio.” I called my entry the “Cinque Fromaggio” or five-cheese pizza on a Moosehead beer crust. I brought almost all of my ingredients with me, except for Parmesan cheese – which was best purchased in Salsomaggiore. I brought my signature house blend marinara and a smoked Gouda, a smoked Mozzarella, a one-year aged white Cheddar and a garlic ’n’ chive Havarti, all made from my local cheese manufacturer.

I finished off my pie with three basil leaves and decorated the serving pan with fresh tomatoes that were still on the vine.

My baking-area competition judge complimented the colours of my pizza and said he thought that it was very pretty.

Overall my pizza scored very well, and I was awarded “Canada’s Best Pizza Chef 2008” by Miss Italy at the award ceremonies the next night. I was thrilled, as this makes the fourth year that I’ve been awarded that title: 2005 and 2006 by Canadian Pizza Magazine and 2007 and 2008 from the games in Italy. I was actually asked to be a judge in Italy this year, but I declined since I was already registered to compete.

Now that I’m a four-time winner, I guess it’s official; I’m a Canadian pizza-baking champion. So next year I will most likely hang up my competitor’s apron for a while and move to the judges’ side of the table.

I hope to see more Canadians come to the games in Salsomaggiore and compete. Actually, I’d really like to see Canadian pizza makers contact me and become members of our Canadian team.

Canada also had another person representing the country at the games this year – Juan Hermosillo.

Regular Canadian Pizza magazine readers will be familiar with this young man as he was living in the United States (illegally) for over 10 years and was denied re-entry into the country after the World Pizza Championship games in 2006.

One of the reasons I love to attend the games in Salsomaggiore is that you expose yourself to so many different pizzaiolos’ creations, ideas and tricks that you have no choice but to raise your own game. It’s a great opportunity to learn from others, the best of the best from each country usually attend, and besides: it’s in Italy, what’s not to love?

Diana Coutu is a two-time Canadian Pizza Magazine chef of the year champion, internationally recognized gourmet pizzaiolo and co-owner of Diana’s Gourmet Pizzeria in Winnipeg, Man. In addition to creating award-winning recipes, Diana is also a consultant to other independent pizzeria owner/operators in menu development, creating systems to run a pizzeria on autopilot, along with marketing and positioning to help operators grow their business effectively and strategically. She is available for consulting on a
limited basis; for more information contact her at Diana@dianasgourmetpizzeria.ca .