Chef advocates for formerly incarcerated people in the restaurant industr 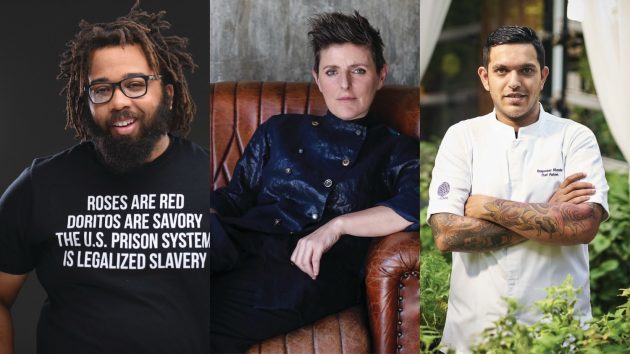 Chef Kurt Evans believes you are not your worst mistake. He has put this belief into practice in many of his roles and activities in the restaurant industry.

Evans has an inspiring track record of helping spark and follow through with change. He started the End Mass Incarceration dinner series in New York City in 2018 to reduce recidivism – the tendency of a convicted criminal to reoffend – and fight mass incarceration. The dinners bring together those impacted with community members and policy makers and have raised money for bail funds, expungement clinics and charities such as Books Through Bars.

In March 2021 Evans and childhood friend Muhammed Abdul-Hadi founded Down North Pizza Philadelphia. Evans and Abdul-Hadi have family and friends who have been impacted by the carceral system, struggling to find employment even after they’ve served their time.

In addition to offering employment, Down North Pizza also provides a fair wage and culinary career opportunities for re-entry citizens, teaching them how to prepare their signature Detroit-style pizzas. Employees in need of housing are offered short-term housing units rent-free for six months in the apartment above the restaurant. The goal is to give returning citizens skills they can use to re-enter society while also offering them an opportunity to make and save some money.

Evans has since moved on to a new role as with Project M.O.R.E., a business incubator that helps formerly incarcerated people and works to create an ethos to help them be business leaders in the community.

We spoke with him about his work with Drive Change, Down North Pizza and his other efforts to shine a light on the issues faced by formerly incarcerated people in the restaurant and food-service industry.

“That job sparked a lot of stuff for me,” Evans said. “I was helping foster this talent of cooking.” He worked with youth coming directly from the incarceral system – “good kids.”

Down North, a “mission-led for-profit restaurant” in Philadelphia, exclusively employs formerly incarcerated people – they are given first consideration in hiring – while providing career opportunities with a fair wage.

Evans was able to recruit staff through his connections in the prison reform system and restaurant industry. “I knew people who were formerly incarcerated such as chef Michael Carter,” he said.

They started the concept about two-and-a-half years ago. “But we were lacking access to capital and business acumen. My partner, luckily, owned the building so that made it a little easier.”

“One of the hardest transitions was pretty much coming from the floor,” Evans said. “I’ve run other people’s restaurants. Trying to stay relevant in the genre of what we were doing: Detroit-style pizza.” They were entering a market where some people weren’t familiar with the style. They played up the idea of nostalgia, associating Detroit-style with school pizza or a lunchroom pizza, square pizza.

Raising the capital was a challenge, Evans said. The Go Fund Me campaign they launched didn’t raise the amount needed but it gave them money to help start pop-ups. “Opening pop-ups was a great way to gauge reception by the public,” he added.

“After we opened [the Lehigh Avenue location] I just had a different mindset of the impact work I wanted to do. As we got going, I slowly stepped back. I wanted to move into a bigger space of impact.”

Abdul-Hadi continues as owner and CEO at Down North with executive chef Michael Carter, who developed the menu and runs day-to-day operations.

“I don’t think formerly incarcerated people have been overlooked, I see [them] in certain industries. The problem is the relationships and the power of people at the top treating people on the bottom as if they have something over them.”

This project has helped him understand people who’ve been in the system. “I can’t generalize or put people in a box, but I do see a common thread: the undying need for redemption. Sometimes they want to show you they are not who are they perceived to be.” That need comes with a level of work ethic that is unmatched, he said.

To operators, Evans suggested, “There are good programs – food handlers and Smart Serve. Reach out to halfway houses. Be willing to take someone on . . . . If the situation gets good, just keep it up, spread the word to other restaurants. Give someone an opportunity to work.” | CP