September 14, 2011, Toronto – Rising energy costs are taking a toll on Ontario's $23 billion restaurant industry, according to an election survey by the Canadian Restaurant and Foodservices Association (CRFA).

In total, 81 per cent of restaurant operators say rising energy costs are having a negative impact on their business.

Rising minimum wage (80 per cent), red tape (79 per cent) and sales taxes (77 per cent) are the next biggest issues identified in the survey. 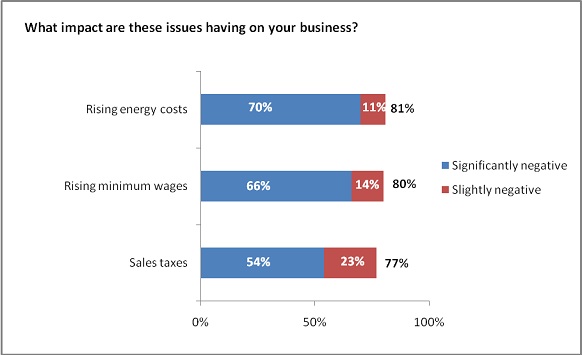 Although minimum wage was frozen this year, it rose by 43 per cent from 2004 to 2010, compared to an 11 per cent increase in inflation.

In addition, liquor pricing and regulations are one of the top challenges identified by licensees in the survey.

"The restaurant industry presents a huge opportunity for Ontario to create jobs, drive tourism and build vibrant communities," says Garth Whyte, CRFA president and CEO. "The results of this survey point out some of the challenges that government and industry needs to address by working together."

With more than 30,000 establishments across Ontario, the restaurant industry employs close to 500,000 people, making it the fourth-largest private sector employer in the province. Over the last two years, however, the industry has lost more than 10,000 jobs due to rising costs and slowing sales.

"Although minimum wage was frozen this year, seven consecutive years of sizable increases, along with rising energy and food costs, have had an impact on restaurant operators and their ability to create jobs," says Ron Reaman, CRFA's Ontario vice-president. "We need a policy environment that helps these important businesses grow, prosper and create more jobs at all levels."

The CRFA survey was conducted online between July 27 and Aug. 16, and is considered accurate within +/- 7.6 percentage points, 19 times out of 20. A total of 164 restaurant operators representing 6,000 establishments  responded to the survey.