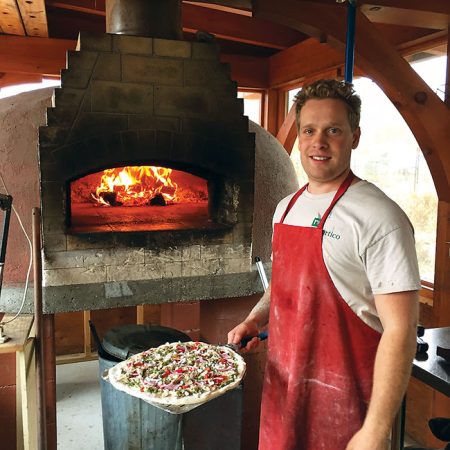 Graham Johnson is responsible for production and does most of the baking in Etna, Pizza On Earth’s custom-made dome-shaped oven. Photos: Pizza On Earth

“My main profession is landscape painter,” says Elizabeth Johnson, owner of Pizza On Earth in Dorset, Ont. “I didn’t expect to run a pizzeria.”

The artist is known for her oil and watercolour paintings of the landscapes of Muskoka and of her travels around the world.

But she is very happy and proud to be at the helm of Pizza On Earth, a thriving family-run seasonal pizzeria in Dorset, in Ontario’s cottage country.

During a phone interview, she explains that 12 years ago, her daughter, Sarah Jane, took a corner of her father’s construction business, to set up a pizzeria and Elizabeth took a corner to display her artwork.

“It was really nice to have a separate room for the art. That became too much of a luxury as the pizzeria expanded into the art gallery.”

Brad Johnson had started Portico Timber Frames in 2005. In 2009 Sarah Jane decided to build a domed pizza oven with her dad and open a pizzeria. At the time she was a university music student and cellist who loved to cook and to bake. With the help of a $3,000 seasonal business government grant, Pizza On Earth was born – a family-owned and -run pizzeria specializing in wood-fired, gourmet, thin-crust pizzas prepared with quality ingredients.

Sarah Jane came up with all the pizzas and their playful names, Elizabeth says. For example, Firetower, their spicy Hawaiian pizza is named after a lookout that is one of the main features in Dorset. Bigwinner, a bestseller, is named for the Bigwin, a wooden steamship that used to ferry people to and from Bigwin Island.

“There’s a story behind each one,” Elizabeth says.

Enter son Graham, also present for our interview, who had spent his summers as a teenager and student working in the business and learning to cook using their dome-shaped oven.

“It was a good fit, since I had just graduated,” says Graham, who is responsible for production and does most of the baking. Elizabeth manages the office and staff.

Elizabeth’s four children and three grandchildren all involved or starting to get involved in the business.

They experimented by switching from frozen, diced chicken to roasting their own chicken, as one example. They now make everything by hand except pepperoni, salami and cheese including their sauce made with crushed tomatoes, their sausage and their own 48-hour fermented dough.


The oven is the showpiece. It sits outside the store on a concrete platform with a timber roof over it. Customers can talk to Graham through a screened-in porch attached to the side door. The outdoor area includes a big deck with picnic tables and umbrellas, and a garden where kids can run and explore while parents watch.

Their oven, named Etna, and built in 2016, can hold six 13-inch pizzas. The firebrick is cut on an angle to fit closely around a heavily insulation insulated armature. “It never gets too hot on the outside and never cools down from 750-800 degrees,” Elizabeth says.

Because in the morning the oven is still hot, they would sometimes bake up to 600 bagels using the residual heat. The bagels were very popular, but they found demand was so high during the pandemic they had to let that aspect of the business go to make sure they did not disappoint their pizza customers.

Dorset has about 5,000 year-round residents. In summer that number rises to 20,000. “It’s very busy,” Graham say. “Every year trying to improve the business by making it quicker.”

If you build a house, staff will come

Many of their staff are students in cottage country for the summer. “We’ve been pretty lucky,” Graham says. “The last couple of years we’ve had a lot of great employees. Several of them have come back over four seasons. It is tricky trying to train them to cook on the oven. It’s taken me years to get good at it. We just get so many orders.”

Pizza On Earth operates from May to Thanksgiving or Labour Day, depending on the availability of their student employees. They are open daily from 11-8 during the summer.

“This summer for the first time we were able to leave for one day to go away,” Elizabeth says. “I was very proud of the staff, really nice to see that and that’s what we’re hoping to encourage.”

For new hires: “We have a day of training when we go over every step of production. We watch and see where they gravitate to.” Some enjoy making the dough, she explains, while others like topping the pizzas or working the front counter. “We try to match the right student to the right job,” she says.

Graham says they recently renovated a building on the property with five rooms that can house six students. They contacted nearby Georgian College and four other colleges and let them know they could provide accommodation. Culinary and other students are attracted to the work situation.

“We try to pay well, generally pay above minimum wage, but we expect a lot,” Elizabeth says. “They do work hard. And we have family events, bonfires, hikes up a mountain. We socialize, especially in June and September when we’re not so busy.”

“It’s such a challenge to find really good workers. You have to put a lot into it. You have to show them you’re committed.” 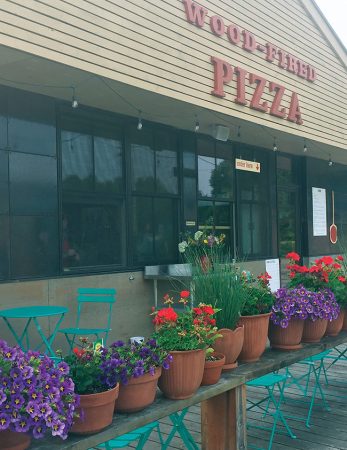 Pizza On Earth is a family-owned and -run pizzeria specializing in wood-fired, gourmet, thin-crust pizzas prepared with quality ingredients.

Before the pandemic hit, they baked bagels, sold bagel sandwiches, served espresso and lattes, and featured the work of a local potter in the art gallery. COVID prompted them to re-arrange operations to takeout only.

“It forced us to focus on the pizza,” Elizabeth says.

They tried a few new things, such as selling bouquets of fresh flowers from an outside table. “Our gardens are so prolific. One of our employees who used to be a florist started arranging the flowers.”

After discontinuing the bagels, they sold artisanal bread and pastries made by a well-respected local baker, certified Master Baker, pastry chef and chef Heinz Hubbert of The Little Badger House.

Graham notes the irony: “We were scaling back because of more demand, not less. Sales went up 40 per cent that spring. We hired 25 kids to try to accommodate. One of the girls wanted to start making smoothies and salads. Customers loved it but it was too much.” Most important was to get pizzas made, he says, and eliminate long lineups and up to 1.5-hour wait times.

For summer 2021, they went down to a team of nine, changed the flow and got a POS system. They plan to add a second oven, so they can teach more staff to bake. “The oven is the bottleneck.”

Currently Elizabeth sells her art through social media and hopes someday to bring back a small in-store art gallery.

That’s not the only dream. They also hope to have a separate bakery where people can buy their house-made bagels as well as Hubbert’s baked goods.

It’s clear they have the flexibility, creativity, drive and family support to make these dreams – and more – come true. | CP