B.C.’s Bicycle Pizza found its path among a cluster of local businesses 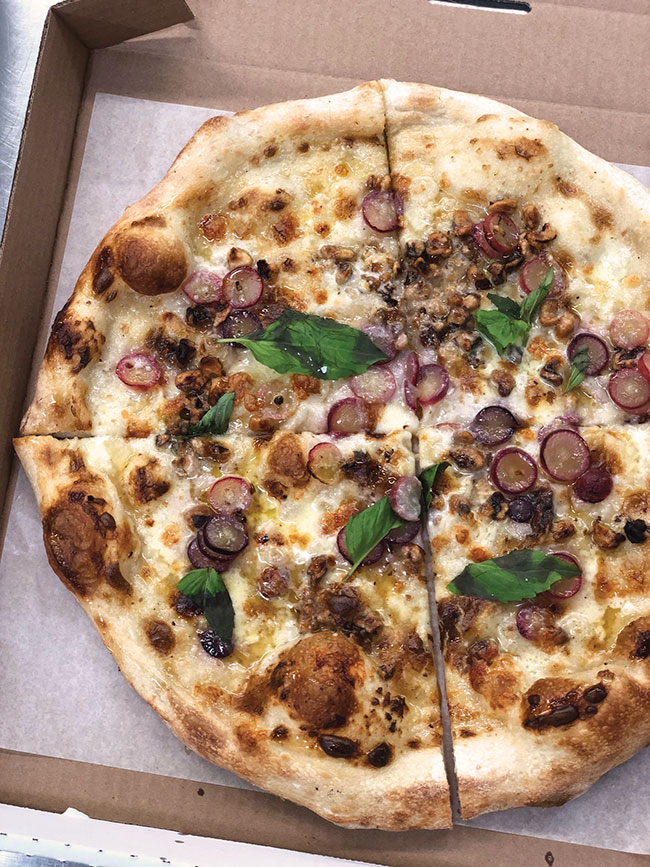 Andrew Johnson, like so many, found his plans shaken up by COVID-19.

But the experienced pizzaiolo finally came into his own when he and wife Vanessa opened Bicycle Pizza in Brentwood Bay, B.C., a village of around 7,000 just north of Victoria.

Sometimes the potential for inspiration is right in front of us. Andrew Johnson found his inspiration in a favourite café he visited regularly in 2020.

Johnson previously worked in the pizza business for 12 years making wood-fired pizza and serving as manager and, for five years, director of operations for the well-respected Pizzeria Prima Strada in Victoria. He began begun working in retail management in January 2020, with plans for a side project, when the pandemic hit, scuttling that idea.

A visit to the Beauregard Café & Provisions, one of Johnson’s favourite local haunts while working in retail, sparked an idea.


The Beauregard inhabits a large space that includes a former commercial bakery. The café shares the space with other complementary small businesses. It is a collaborative business incubator that, according to the website, is about “connecting and supporting our community, doing our best to respect the people and natural systems we share our beautiful land with.”

When Johnson saw a notice inviting collaborators, something sparked. He emailed owner Doug Mutch and asked about running a pizza program at night. That was in October 2020. By February 2021 Bicycle Pizza hit rubber to road.

It turned out to be the right move at the right time for the budding entrepreneur. Bicycle Pizza shares its kitchen (former bakery) space with the Beauregard. The Johnsons and other tenants – as of late August there were eight – pay rent to the Beauregard. The business incubator helps small businesses save on overhead costs. “It’s good for them to be able to work with other businesses and help them get off the ground,” Johnson says. “It’s a supportive environment. We help each other navigate running and promoting our businesses.”

Diverse tenants include “a cool west-coast consignment and clothing store,” an environmentally friendly soap shop with refills available, a vendor specializing in hot sauce, a pick-up location for Sidney Scones and a stability ball workout space.

They inhabit the same space – in the pizzeria’s case, at different times. On Thursdays, Fridays and Saturdays, when the café closes at 5 p.m., Bicycle Pizza’s tight team of five starts pumping out pizzas (pardon the pun).

Relinquishing some control of the business is a challenge, Johnson says. “If you can kind of let go of some control, it’s pretty rewarding. We treat the space with respect and clean up after each other. There’s a lot of compromising, but to not be in debt is huge.”

Johnson makes use of some of the existing equipment and has added a couple of refrigerators. He and his team bake using a two-tier convection oven.

What’s that you say? Not a pizza oven? Johnson at first thought this might limit his ability to produce pizza. But adapting his recipes and technique to that oven helped him hone his skills and made the pizza all the better for it.

“We’re getting great results,” he says, adding that being openminded about pizza styles has allowed his creativity to flow.

Johnson did a fair amount of travelling in his roles at Prima Strada, spending time in New York, southern Italy, and California at the Verace Pizza Napoletana institute.

Expertise gained over years at Strada and his own experimentation make Johnson’s pizza unique. When asked to describe it, he happily describes a style that resists being categorized: “I guess I’d call it New York-ish – if I had to pick one style,” he says. “Thin crust, but with some structure (not like Neapolitan). Enough of a crunch, right in the middle. Five per cent whole wheat. Long fermentation of 24-36 hours. We don’t use starter, just Canadian flour.

“The sauce is uncooked with olive oil, garlic and salt – this helps the tomato sauce retain really juicy brightness. Dry mozzarella and fior di latte give us the best of both worlds.”

Haus Sausage Co. supplies all their meats. “We didn’t want to race to the bottom,” Johnson says. “We wanted to work with people who make honest, good products. The peninsula is a very rich agricultural area.”

It’s a seven-minute bake using a modified recipe from Flour, Water, Salt, Yeast, by Ken Forkish of Ken’s Artisan Bakery in Portland, Ore. Johnson also gobbled up Forkish’s The Elements of Pizza, modifying the fermentation to get exact results he wanted.

They make on average 50-75 pizzas a day and they are able to do pop-ups once a month in downtown Victoria. “We don’t need any special equipment. Part of our learning curve was to tweak our recipe so you could bake it in any oven.” 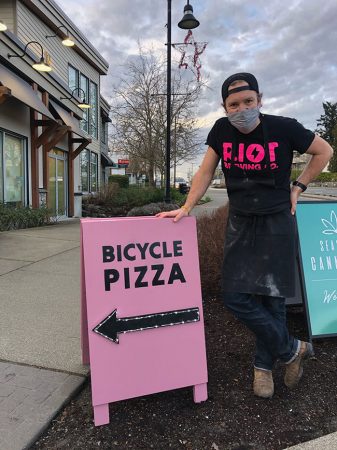 Andrew Johnson stands outside of the Beauregard Café in Brentwood Bay, B.C., home of Bicycle Pizza, a business he and wife Vanessa own and operate.


Let’s be clear: there are no bicycles delivering pizzas here. The only physical bike is the one Johnson loves to ride. And their sponsorship of biking events and groups like the Tripleshot CrossFondo and South Island Mountain Bike Society. Otherwise, the bicycle symbolizes a state of mind: “Work hard, ride bikes, eat pizza.”

It’s also a metaphor for the business. Like a bicycle, the business is flexible, agile and has a low footprint, Johnson explains. “I like bikes and how they are a very effective alternative mode of transportation. I think ours is an effective business.”

And it’s streamlined. They do pickup only. Using online ordering module Tock, customers can book an appointment to pick up their pizza and plan their day around it, Johnson says. “We thought that would be a good idea to streamline the operation. Then there are no surprises. And it makes it easier to prevent waste. It’s something I’m really proud of.”

The team consists of Johnson, right-hand pizza chef Kevin Sommerfeld, three other staff and their secret weapon – Vanessa Johnson – who works full time as a digital communications professional and puts her public relations and marketing skills to work independently for Bicycle Pizza. Vanessa has arranged a lot of press for the café, pizzeria and other tenant businesses, much of it through news media stories. 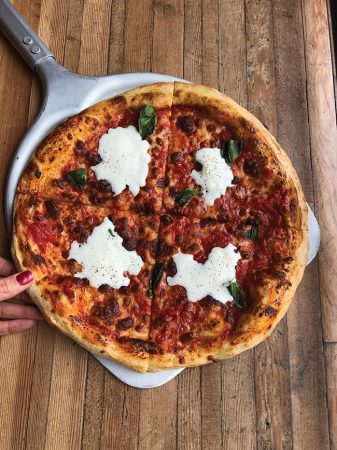 They make on average 50-75 pizzas a day and are able to do pop-ups once a month in downtown Victoria. “We don’t need any special equipment.”

Branching out to frozen


The enterprising Johnson started selling frozen pizza in March. As he describes it, while experimenting, he “stumbled on” a great frozen pizza recipe. “It’s almost as good as fresh, but miles and bounds ahead of standard frozen pizza you see out there.” The business is able to reach a larger market by selling its frozen pizzas through the Beauregard, Haus Sausage Co., Riot Brewing and other partner locations and by monthly subscription.

They are looking at expanding the frozen part of their business and are currently seeking sustainable packaging for the frozen pizzas.

“It turns out running a restaurant is a lot different than running a frozen pizza outlet,” he says with a laugh. It’s exciting to see how the different paths have all evolved. The challenge is keeping up with the
demand.”

Johnson is philosophical: “I’m treating this business as I would add salt to a recipe. I can always add more. But whatever I’m doing, I want to have a good base of quality, a good base of balance. How do you scale back once you’ve expanded? It’s the same with our quality of food. We can add on to that – with salads, etc. – but it’s got to be a really good foundation.”

They are building a brand on their own terms. “I want to design a business that can operate outside of me, so that I can grow and do different things,” Johnson says. “It’s important that I can teach people. I’m pretty thrilled to be able to step away for a week.”

Bicycle Pizza is expanding by leaps and bounds beyond the original goal, he adds. But he’s up for it: “I’m not into moderation, let’s put it that way.”