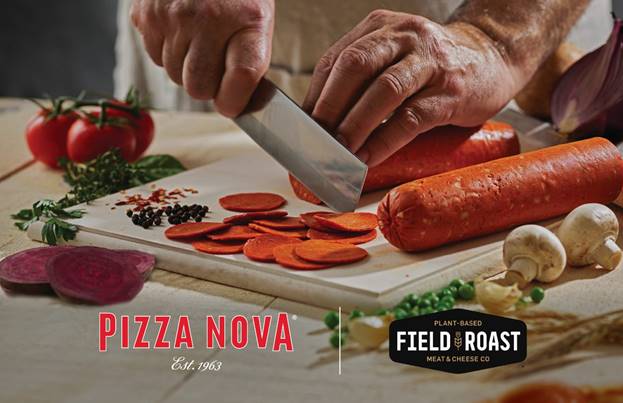 Toronto and Chicago – Southern Ontario-based franchise Pizza Nova has added Field Roast Plant-Based Pepperoni, made by Greenleaf Foods, SPC, to menus at all of its locations.

This is the first time the product, which has a similar flavour and texture as traditional pork pepperoni, will be available to consumers anywhere, Pizza Nova said in a news release.

“We are proud to offer a plant-based pepperoni that delivers on our Puro Promise of sourcing high-quality products that do not compromise on taste. The addition of Field Roast Plant-Based Pepperoni to our menu will allow us to expand our offerings and better serve flexitarians, vegetarians and vegans alike – always in the same careful and loving manner,” said Domenic Primucci, president of Pizza Nova.

The Plant-Based Pepperoni is available from Pizza Nova as a topping for pizzas and panzerottis, and as part of six new plant-based creations, including the “Planteroni.”

Available starting Jan. 11, Field Roast Plant-Based Pepperoni is the first pepperoni alternative to be made with pea protein, not soy, and contain the same protein per serving (six grams) as traditional pork pepperoni. The Plant-Based Pepperoni has fat marbling and a bold pepperoni taste, made with fresh spices, including whole pieces of fennel, cracked black pepper, garlic and paprika.

Pizza Nova will offer the Plant-Based Pepperoni as a permanent menu item. It is available as a topping for pizzas and panzerottis, and as part of six new plant-based creations, including the “Planteroni.”

“Pizza Nova is the first major Canadian pizza operator to offer the groundbreaking Field Roast Plant-Based Pepperoni,” said Dan Curtin, president of Greenleaf Foods. “We’re excited to partner with them because of their commitment to crafting flavourful, quality foods, just like Field Roast.”

In addition to Plant-Based Pepperoni, which is expected to be on retail shelves in Canada and the United States later this year, Field Roast produces more than 25 plant-based meats and cheeses made from vegetables, grains, legumes and fresh herbs and spices.

Founded in 1963, Toronto-based Pizza Nova is a family-operated business and has more than 140 locations in Southern Ontario. The first franchised Pizza Nova opened in 1969.