Past and future unite! A tale of 2 young pizzeria owners 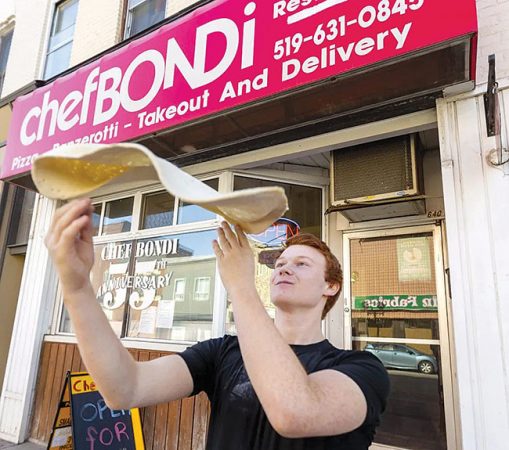 Chef Bondi: Bringing back the classics

Dylan Taylor will remember 2020 for the pandemic but also because that’s when, at age 19, he became owner of Chef Bondi Pizza in St. Thomas, Ont.

Under the ownership of Agostino (Gus) Bondi and Phil DiLosa, the pizzeria has seen railway and automotive booms come and go since it opened in 1964.

For three-and-a-half years, Taylor worked closely with DiLosa, and later with an interim owner for four months in 2019. Taylor bought the business for $60,000, a steal of a price, after saving up after working two jobs full time and at the pizzeria part time.

He remembers the moment he decided to accept the offer to buy the business. “I was at the factory the day after the offer was pitched to me. I was working, putting parts where they needed to be. I just stopped and looked around. I thought, ‘This can’t be me in 50 years.’ It was like a switch turned on in my brain telling me that’s what I am supposed to do.”

The young entrepreneur’s strategy has been to return the pizzeria to its roots and he is working hard to highlight its glory days.

They sell two main pizzas: Chicago-style and original, both of which are popular. They bridge old and new during this transition by giving customers choices. Cheese on top or cheese on the bottom. Sauce developed in 2019 by the previous owner or the classic “Phil’s sauce.”

“I like to please as many people as I can.”

He says the pizza business has taught him key skills such as dealing with the public, time management, taking instruction and being able to confront someone and ask for help.

“I am not a social person. That made me want to work in food,” he says. “I had anxiety, I couldn’t function well, and I saw as opportunity to be able to fix something I struggle with. It’s really helped me.”

“Working here has been a great way to open that gateway into talking to people face to face and when they’re in a good mood.”

Food service can help you with stress management, he says. “You have to go from slow to fast, figure out priorities and be able to shift into gear. It’s a very important skill. I think every kid should try food service to see the different ways you can manage your time.”

He’s also a problem solver. “I love hearing if I did something wrong because I can fix it on the spot. If you can get the feedback when you need it, it gives you the ability to improve things.”

He works with four team members, most of whom are young. He finds managing staff he used to work alongside as a co-worker tricky at times. “That’s a little barrier I’m trying to overcome. But I like knowing I have something to work on.”

Bookkeeper and small business advisor Kathy Cook Noble has been a great source of help, he says. “As much support as a person can give a pizza business, she gives – she orders pizza for her office and tells everyone about the business. And she invited me to do a podcast with her. It’s a great idea to take opinions from someone else.”

One change he has made is to add a full breakfast. His dad, an experienced cook, volunteered to serve a full breakfast from 8 a.m. to noon to residents of new seniors apartments across the street. It provides an affordable meal, makes the pizzeria part of the neighbourhood and uses the otherwise empty space during off hours.

There are more changes in store but most relate to returning to a retro vibe. He recently obtained the full set of classic recipes from Phil. “We are getting set to ‘pump up the diningroom.’ ”

“We’re trying to keep everything super retro, authentic Italian, making our own pastas and sauces. We want to do build-your-own pasta and handmade ravioli. That’s something missing in the St. Thomas area.”

When the pandemic is over, he wants to get back their liquor licence and bring in some nice wines to complement the menu. He brims with excitement as he describes his vision and his plans to talk with great Italian chefs for inspiration. “This is totally new for me to explore and learn about.”

“I really just want to add my own thing but keep it what it was. That’s really what I want most for the business. I like the story it had.

“I am honoured to carry on.” 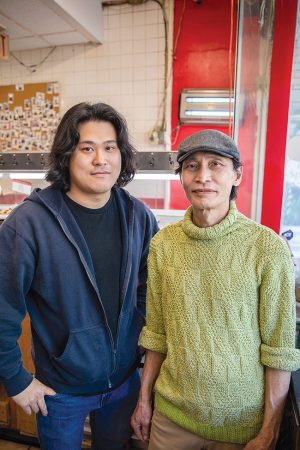 In 2017, at age 25, Matt Chung bought Papa Ceo, a Toronto pizzeria with a colourful history going back to 1984. He brought to it a pair of fresh eyes and a talented, hardworking family to help run it.

The Papa Ceo (pronounced “Chey-o”) website is bit tongue in cheek, calling itself “a hole-in-the-wall, family/friend-run pizzeria serving one of the best thin crust pizzas in Toronto.”

But the story of this pizzeria and its revamp is fascinating.

According to Chung, Papa Ceo was opened in 1984 by Tony Bonventre, who came to Toronto from Sicily in the 1950s and opened several pizzerias with various family members. Chung and his family took over Papa Ceo’s, tweaked the original recipes and added their own twist.

Chung’s great uncle and father introduced him to the opportunity. “My great uncle, Tai Lam, had worked at the rival pizzeria next door for over 20-plus years and my dad used to own his own sandwich shop,” the young owner says.

Tai Lam is key to this story. A Vietnamese refugee, he came to Canada in the late 1970s and started off delivering pizzas and working at a bunch of Toronto pizza places, his nephew says. “He’s a good resource to have.”

Tai, the chef, was actually more like a partner when first hired. Other family members work in the pizzeria as well – a total of nine staff. Chung says he couldn’t operate without the help of his family, some of whom quit their previous jobs to come on board. “It’s a lot of work. It’s important to have trusted, dedicated people working with you.”

Chung himself has an interesting background writing music for films. He likes the change of pace from such an introverted line of work. “I really like building relationships with customers. I’m so sheltered. And all these people have different stories.”

“I think the most special thing is that I get to work with my family and friends. We just hang out, make pizza, hear random stories from customers, witness interesting things and it’s pretty fun. It helps that we’re in such a diverse area right beside University of Toronto where we see so many international people.”

Typical customers are community people and especially university students. “We do a lot of slice sales,” he says.

“Our brand is special in the way that we fuse traditional Italian pizza with Asian toppings,” Chung says. A common element to several of the pizzas is a special spicy pork sauce.

Many Retro Classic pizzas are named for movie stars such as Kevin Bacon and Audrey Hepburn. Legend has it that Robert De Niro came into the store in the 1980s and there is a pizza named for the Hollywood giant featuring Italian plum tomato sauce, mozzarella, Italian sausage, ham, prosciutto, mushroom and spinach. The bestseller on the Retro Classic menu is Tony’s Sicilian.

Every week or so, they shake up the display at the front with a special pizza created by their team. For example, Long’s Clam Chowder was created by his dad.

“The biggest challenge as an owner is trying to constantly improve and innovate,” he says. After that, the challenge is sourcing quality ingredients without breaking the bank.

Like so many restaurants, COVID-19 threw them for a loop. “We thought would go away in two weeks, but after the shutdown suddenly 80 per cent of business just stopped, though we were still getting orders on Friday and Saturday. They no longer saw their regular customers but, surprisingly, during the pandemic people placed large orders.

Looking ahead to the future, they are in the process of figuring out take-and-bake and developing a line of Asian-Italian frozen pizzas. “We want to focus on getting our logistics down, improving our workflow, then after that we want to expand,” Chung says.

“I took over not knowing anything about pizza or the food industry. It was a totally new environment for me coming from a music production background. I think what I bring to this longstanding business is a pair of fresh eyes. This business has been around longer than I have been alive, which is intimidating, but I’m not married to any ideas on how it used to operate and I’m not afraid to do things that challenge tradition.”