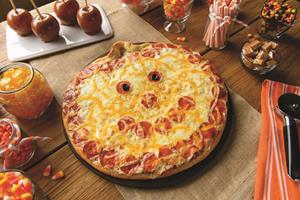 Vancouver, WA – In the run-up to Halloween, Papa Murphy’s is promoting its Jack-O-Lantern Pizza, which is available this month at participating U.S. locations for $8 when ordered in store or online.

The specialty pizza is made from dough in the shape of a pumpkin and topped with traditional red sauce and 100 per cent whole-milk mozzarella. Premium pepperoni is perfectly positioned into a smiling Jack-O-Lantern face with two olive eyes, the company said in a news release. It is baked at 425 degrees.

The chain, which operates more than 1,500 stores in the United States, Canada and United Arab Emirates, is celebrating National Pizza Month by running a promotion that gives customers weekly chances to win a prize on Papa Murphy’s Facebook, Twitter and Instagram channels. Guests are encouraged to snap a selfie with the Jack-O-Lantern pizza using the hashtag #JackoSelfie to be entered to win one of four $25 gift cards.