A comparison between three leading styles

In the case of pizza oven vs. pizza oven, only you can
be the judge. The wide range of equipment options can leave some
pizzeria operators stuck in deliberation. 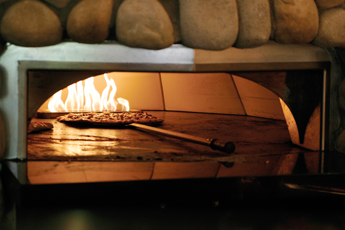 In the case of pizza oven vs. pizza oven, only you can be the judge. The wide range of equipment options can leave some pizzeria operators stuck in deliberation.

Finding the right oven means first evaluating the needs and wants of your particular establishment.  When seeking advice from the various equipment manufacturers, operators are generally approached with the same line of questioning:

what volume of pizza do you want to produce?

Many manufacturers will first determine what size of oven you require by considering the oven’s “hourly output.” Quite simply, how many pizzas the oven can bake in one hour’s time.

If outputting a high volume of product in the least amount of time is a priority for you and your customers, then a conveyor oven is the likely choice.

Conveyors allow for an increased speed of production because they do not require a skilled pizzaiolo to operate, and they work on what Greg Hotta, distribution product manager for Garland Canada, called a “continuous cooking platform.”

Pies are placed on a moving belt and picked up at the other end, cooked. Depending on their size, two or more pizzas, with a few lined up behind them, can be placed on the belt at the same time.

Conveyor ovens range in sizes from 20 inches to 20 feet (for larger processing houses) and can be stacked on top of each other for maximum capacity. According to Carl Buller of Middleby Marshall, not many stores in Canada would stack more than two high; “there just isn’t enough volume.”

Most pizza chains use conveyor ovens, but there is one exception to the chain rule, according to Buller.

“Pizza Pizza is the only large chain with high volume that does not use a conveyor oven,” presumably because their owner simply prefers his pizza coming out of a deck oven. Which leads us to our next question …

What type of pizza are you cooking?

“And I don’t think I’d be able to get the same sort of product out of a conveyor,” said Sabherwal.

Deck ovens do require more skill but are said to bake a better pie.  In his previous place of employment, Sabherwal ran into “cook-ability” issues while using a conveyor.  He received complaints about pizzas not being cooked completely on one side.

Sabhewral admittedly runs out of cooking space with his deck oven, but would still rate the deck higher than a conveyor, especially in terms of initial investment and customer satisfaction.

Conveyor ovens tend to be more expensive then decks and, “for us, for independents at least, it seems as if each (pizza) is handcrafted to the customers’ needs … it doesn’t look like a chain product,” said Sabhewral.

Hotta said decks are generally sold to more traditional mom and pop operations. They prefer the baking style of a deck, “because it’s what they’re used to.”

When it comes to producing pizzas, to cook a pizza really well on a deck takes a fair amount of skill.

“Guys in small places end up having to work every Friday and Saturday night of their life because they can never leave the place alone,” added Buller.

He was once approached by an operator who said, “I have to thank you, I got a  conveyor oven installed about three or four months ago and two weeks later I was able to take the first week off I’ve been able to take in 20 years.”

what level of skill can you expect from your employees?

If pizza tradition coupled with skilled pizzaiolos is your restaurant’s point of differentiation – your number one feature – you might want to consider a stone-hearth oven. Usually made of stone, clay adobe, refractory tiles or concrete, stone-hearth ovens were traditionally fuelled by burning wood, but are now available in gas-fired ovens.

The Wood Stone Corporation offers gas-fired stone-hearth ovens that fit in a similar footprint as a conveyor or deck, but are in fact very different ovens, according to the Washington-based company.

“They’re showstoppers,” said the company. These stone-hearth-style ovens create a visual appeal  – an attraction for customers – and are a key element in a traditional-inspired ambiance.

Like in a deck oven, pizzas need to be “shuffled” or rotated around the inside of the cooking chamber of any stone-hearth oven to  ensure all sides are baked evenly.

There has been some confusion over what role the type of fuel source, namely gas or wood, plays in the performance of the oven and the quality of the food it produces. Wood Stone’s answer is that the fuel source is not the secret of the oven; the stone hearth is.

“Until 1994, if you had asked us the same question, we would have been die-hard advocates that ‘the wood made it good,’” (www.woodstone-corp.com). But the company underwent what they considered a paradigm-shifting experience.

Is energy efficiency an important consideration for you?

Oven manufacturers are addressing the needs of the industry by incorporating energy saving features into the design and construction of their ovens.

Conveyor ovens are usually available in both gas or electric, with the exception of the smaller countertop models, which are not conducive to a gas-heating source. Most people will choose gas, said Buller, because electric ovens require more power to get started and to keep them heating. And because typically operators already have it installed for the fryers, gas is also the most efficient choice.

Hotta, a distributor of Lincoln ovens, said some manufacturers offer different variations of the technology. Some will use radiant heat, like a giant toaster, but that is an electric format, which requires much more energy than gas.

Three years ago, Middleby Marshall developed the patented Energy Management System with Pacific Gas & Electric, which saves a minimum of 30 per cent of energy over the ovens they were producing at the time.

Newer conveyor models reuse much more of the air.

“In the old days, it was basically punch as much heat into the pizza as possible, and a lot of heat left the oven, either through a flue or out the ends,” said Buller.

This is another reason Sabherwal prefers his deck oven. Not only is the conveyor oven more expensive, it requires a heat-vac system to vent it out, said the restaurateur. So there’s a huge cost difference in terms of initial outlay.

“But this is our perspective, I’m sure people who work with different ovens have different perspectives.”  It depends on your specific needs.

Sabhewral likes the idea that he can give each pizza that personal touch. He’s found an oven that he and his employees can agree on – for him, control over the finished product was a main priority.

Determine what your own priorities are; always “test drive” your product in the oven before purchasing; and never compromise what is important to your customers – and you’ll know you’ve made the right decision.•