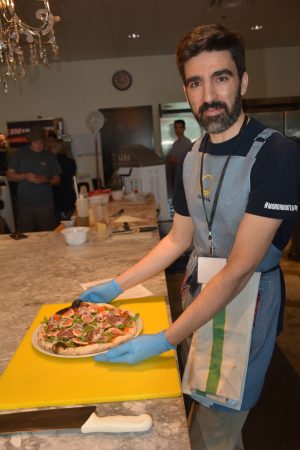 Burnaby, B.C. – Luca Colasanti of Mordimi Bite of Italy in Vancouver is the first Canadian Pizza Chef of the Year West.

British Columbia is home to some of the most creative pizza chefs in Canada as Canadian Pizza learned when it took its well-established Chef of the Year competition west for the first time to Burnaby, B.C.

Colasanti’s winning pizza, Fighissima, won over judges at the first Canadian Pizza Summit West, held June 6 at Snow Cap Enterprises in Burnaby. Fighissima’s crust featured a mixture of three organic flours from Italy, including double-zero and spelt flour. The dough is made using a biga that is fermented for 48 hours. Colasanti said that the combination of different flours helps make the crust light with a fantastic crunchy effect.

Colasanti’s idea was to bring a taste of summer as the season begins.

Judges Francesca Cavallo, Francisco Migoya and Martin Barnett snap photos as each pizza is rolled out.

Aaron Gerhman of Emilio Finatti Pizzeria made pizza to his own soundtrack of jazz music.

Tony Llewellyn of host and sponsor Snow Cap Enterprises presents Luca Colasanti with his Chef of the Year Westaward.

Hiten Gupta of Pizza Mantra, joked with the crowd and had fun competing.

All photos by David Judd for Canadian Pizza.

Steven Che co-owner and head chef with Wild Flour Pizza Co. in Burnaby earned second place for his butter paneer pizza featuring a Makhani gravy base consisting of the pizzeria’s house-blended garam masala, ripe California plum tomatoes, butter and cream. It was topped with caramelized onions, paneer (an acid-set cheese made from cow or buffalo milk) and mozzarella cheese.

A small group of creative and competitive pizza makers brought their creative pizzas from Vancouver and area:

More than 40 pizza professionals attended the day-long event, which included several pizza-focused suppliers. Snow Cap Enterprises had on display several of the ingredients and food products it distributes to operators. Ardent Mills brought its flours and blends to the show, including new gluten-free and keto-friendly blends. EM Bakery Equipment brought its Esmach Bakestone electric oven, ideal for Neapolitan pizza making, along with its industrial mixer and other equipment. Lactalis talked up its Galbani line of dairy products, including lactose-free pizza mozzarella. Anita’s Organic Mill was on hand to discuss and sample its organic flour blends, including its pizza and pasta flour. Lesaffre brought its years of yeast expertise to the event. Seaside Paper Products walked attendees through its sustainable packaging options, including a holder designed for by-the-slice pizza. Serving as judges were Francesca Cavallo of the Italian Chamber of Commerce in Canada – West; Martin Barnett, executive director of the Baking Association of Canada; and Francisco Migoya, and Modernist Cuisine head chef and award-winning co-author of Modernist Bread and Modernist Pizza.

Chef Migoya delivered a compelling presentation on pizza, past, present and future. His presentation included tips and techniques for pizzaioli he and co-author Nathan Myhrvold developed while researching Modernist Pizza, a comprehensive three-book set exploring all things pizza and featuring more than 1,000 recipes.

Watch for coverage of Pizza Summit West along with a profile of Chef of the Year West Luca Colasanti in upcoming issues of Canadian Pizza and at canadianpizzamag.com.