Benefits of Buying Brews from Your

Craft-brewed beers, made by one of Canada’s small,
regional microbreweries, can give independent operators a distinct
competitive advantage over large restaurant chains. Craft beers are
unique to their local regions and are not readily available in most
pubs or restaurants. 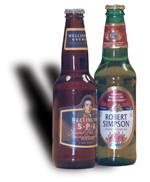 Craft-brewed beers, made by one of Canada’s small, regional microbreweries, can give independent operators a distinct competitive advantage over large restaurant chains. Craft beers are unique to their local regions and are not readily available in most pubs or restaurants.

Like independent restaurant owners, craft brewers compete with their respective corporate adversaries by emphasizing the quality of their product. They too, are local artisans. By highlighting the homegrown talent of local brewmasters, restaurateurs are retaining local flavour, while increasing their beer offerings.

Pizza and beer is a natural pairing, according to international beer authority, Stephen Beaumont.  He said because craft brews have more pronounced flavours than commercial beers, the different variations allow for a multitude of pizza and beer match-ups.

Consumers are getting to the point where they’re micromanaging their meals, said Steve Merrick, product consultant for the Liquor Control Board of Ontario. The trend has gone mainstream more so with wine, but craft brews are slowly catching on.

According to Statistics Canada, there were four breweries producing craft and specialty beers in 1984; today, there are over 50 Canadian microbreweries. They typically blend modern day technology with traditional brewing practices to brew distinct (and fresh, because it’s local) beer.

Because it’s brewed in small batches, distribution of a craft brew is very limited. In Ontario, for example, with the exception of their flagship stores, which carry every label, only LCBOs within a 20 to 40 square kilometre radius of the microbrewery receive shipments.

Restaurant owners would order directly from the brewery, said Merrick.

“Match your own distinct pizza with regional beers indicative of your area,” added Merrick. Check out your local farmers’ market and get out for a drive to try the different breweries.

One thing that is a reality for restaurant operators is that profit margins are larger on premium beers than they are on mainstream beers.

The problem is people don’t spend much thought on what beer they’re going to have with their pizza, said Beaumont.
“When most people reach for a beer, they’re automatically reaching for a commercial lager. So right away, they’re taking the wrong step, they’re right into lagers.”

As a restaurant owner, one is not expected to have the knowledge of a beer aficionado, but they must know their market. If they are catering to a more affluent crowd that doesn’t mind paying six dollars for a pint, then craft-brewed beers are a no-brainer. Otherwise, they might want to stick to the better-known brands.

For independently owned restaurants, the competitive advantage is the owner.  Restaurateurs can exploit their ability to incorporate whatever is wanted into the menu; because the restaurant is not a replica of 50 other restaurants, it can be responsive to its customers' tastes, and local flavours.

If the operator chooses to respond with a Canadian craft brew, consumers will be getting some of the best in the world. Canada’s sophisticated beer market is ranked internationally as one of the best in the industry.
But do not venture into the world of craft beers lightly, the experts warn. Consider what pizzas customers will match with the local brews, by adhering to the following guidelines.

Beaumont put it quite simply: when you’re dealing with a food that, when paired with wine, you would want high-acidity, with a beer, you would look for more hoppiness.

Beaumont crafted these guidelines and published them for the first time in his book, Taste for Beer. In it, readers find that there are a couple main flavour points in beer. These terms are imperative when addressing the complex task of food and beer pairing:

Malt: The malt is the sweetness of the beer. “The caramel, toffee, roundness that you get in ales,” explained Beaumont.
In lagers, it’s a cleaner, crispier, more linear flavour.

Effervescence: Effervescence refers to the level of carbonation. Commercial brands of beer tend to be more effervescent than craft brew beers, because they are carbonated at higher rates.

There is one case where a craft lager would serve as a great flavour match for pizza, and that’s with pizza margarita. Because every modern red sauce pizza is a derivative of pizza margarita, Beaumont suggested this is a good place to start.

With this basic pizza, the key is to address the acidity of the tomato. And a Vienna style lager, which has significant malt flavour, is a good match. These “red lagers” or “Vienna lagers” have some hoppiness but are not overly bitter.

Getting into North American pizzas with thicker crusts, more cheese and some kind of meat topping, operators need to go back to Beaumont’s wine and food pairing rule.

“If you look at pairing a wine with a pizza, no one is going to go reaching for a bottle of chardonnay. So, right there, you are looking at ales in terms of beer pairing.”

Ales carry a fruitiness that lagers do not, said Beaumont. And their hoppiness helps to counter the acidity of the tomato.

Next, one must determine what the most pronounced flavour in the pizza is; then start pairing according to topping. If the flavours are predominately salty – anchovies, olives, artichokes or pepperoni – this is where in a wine, one would start looking for acidity; so in beer, start looking for more hoppiness.

Also consider the weight of the beer and the pizza. As a general rule, do not match heavier, dark ales with a meat-laden pie with heavier, stinky cheeses, said Merrick.

The hallmark of a good wine pairing is when the consumer can pick up some of what they’re smelling in the wine, on the pallet – in the food they’re eating, said Merrick. The same goes for beer.

A pizza with significantly sweet toppings – sundried tomatoes, caramelized onions, a sweeter goat cheese and tomatoes – would pair with an Irish red beer, which starts out sweet, but ends dry and acidic, said Merrick.

If the pizza just isn’t sweet enough to make the match, start bending the rules, said Beaumont. Try a contrasting relationship. A dry stout, like Guinness (which isn’t a craft brew, but makes for a good example) would contrast nicely against the mild sweetness.

People’s tastes will often lean them toward one taste or another. These “rules” are not set in stone. They serve merely as guidelines to help you steer your patrons in the right direction.

Providing a little education and some locally-crafted beers will illustrate the operator’s ability to create an environment that is responsive to their customers’ regional tastes.

And that’s something the larger chains simply cannot do.