Steve Moynes could be the poster boy for multi-tasking

Steve Moynes could be the poster boy for multi-tasking.
After all, it must take some kind of talent to drive a cube van, answer
the phone and make a pizza all at the same time. 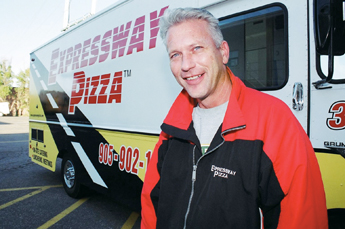 Steve Moynes could be the poster boy for multi-tasking. After all, it must take some kind of talent to drive a cube van, answer the phone and make a pizza all at the same time.

OK, so maybe he has a bit of help but such is the concept behind Expressway Pizza, a mobile pizzeria that’s giving new meaning to the concept of meals of wheels.

“It’s a neat concept. We’ve got a restaurant on wheels and away we go,” Moynes said.

Expressway Pizza was born out of Moynes’s realization that pizza delivery wasn’t to be taken for granted. In 1999, Moynes, originally from Lindsay, Ontario, moved to Oakbank, Manitoba, a small bedroom community just east of Winnipeg.

Much like any small prairie town, Oakbank came equipped with an arena, schools, a couple of gas stations, a hotel, one sit-down eatery and two fast-food franchises. But in a town of 2,300, good pizza, let alone delivery, was non-existent.

No stranger to the food service industry – Moynes was Mr. Tube Steak in a previous incarnation and franchised more than 300 hot dog carts – he saw the absence of pizza delivery as an opportunity rather than something to lament. Soon after the move to friendly Manitoba, Expressway Pizza was born, delivering hot, fresh pizza and chicken wings to Oakbank homes. This wasn’t just a run-of-the-mill pizza joint, though. Moynes was not only delivering pizza pies to the doors of the Winnipeg suburb, he was making then en route.

Here’s how it works. Someone drives the trademark yellow, black, white and red Expressway Pizza truck, another person takes orders and, in the galley kitchen built into the back of the truck, someone else whips together a made-to-order “down-East style” pizza.

The whole process can be completed in under 15 minutes: six minutes to make the pizza, six minutes to cook, plus delivery time. However, Moynes and crew are usually so busy, customers have to wait half an hour before the pizza arrives. Regardless, the pizza always arrives the same way at every door: fresh out of the oven.

“It’s simply the concept of having the truck and having the product fresh. You have to time it to get it right to your door. We get there and the product’s  hotter,” Moynes said. 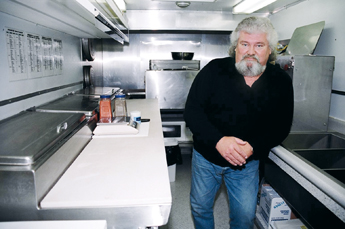 It’s also tastier, according to Moynes. The down-East style pies that Expressway Pizza markets are similar to deep-dish. It’s a recipe Moynes learned from a pizza guru far removed from Italy – in Northern Quebec.

“We dice everything so if you have 10 toppings, when you eat it, you taste every topping. People know when they taste it. They say that’s down-East style.”

Despite his confidence in how his pizza tastes, Moynes isn’t about to take on the big chains in the big cities just yet. Instead, Expressway Pizza is carving out its niche in small towns – those areas eluded by the pizza delivery guy or lacking in options for anyone with a hankering for double cheese and anchovies.

He described Expressway Pizza as “a really good business for a husband and wife or a dad and kids.

“In a small town, they’ll know everyone, too,” Moynes said.

It would be tough for Moynes and his franchisees to tackle the urban market right now, Moynes admitted. There’s only a fleet of 12 Expressway Pizza trucks spread out in western Canadian towns that are barely a blip on the road map.

“It would be so difficult to deliver … The traffic, it’s not feasible (in large cities). You’d need 50 trucks (in one city),” he said.
Still, it’s not going to keep him from trying to take at least a nibble out of the big city pizza market while Expressway Pizza is still in its infancy. This month, Moynes is launching Expressway Pizza in Caledonia.

Territory developer, franchisee and Caledonia resident Dave Edwards will spend his days servicing the lunch crowds in neighbouring Steeltown and catering business lunches. In the evenings, Edwards will serve up Expressway Pizza to hungry families in quiet Caledonia.

The truck will serve as the flagship for the region, hopefully attracting potential franchisees on each road it travels and with each pizza it serves. Moynes hopes to have a fleet of  “a couple hundred” trucks serving Canadians, particularly Ontario, in the next 10 years.

Edwards climbed on board with Expressway Pizza because of the entrepreneurial spirit the company fosters.

“You open up a store and put out a shingle saying ‘pizza,’ you’re just a guy among hundreds of others in Hamilton,” he said. “With this, if you don’t like the location, you just take it somewhere else. Everybody thinks they have the best product out there but now you can go out and be proactive about it.”

He was also drawn to Expressway Pizza because Moynes wants his franchisees to be successful. No matter how busy Edwards will get, he’ll only have to pay $500 in royalties each month.

Both Edwards and Moynes are confident that as the fleet of roving pizza parlours grows, major chains will be left in an Expressway Pizza truck’s dust because of the product they’re serving.

“If you’re a pizza place, everyone will give you a shot,” Moynes said. “Everyone is looking for the perfect pizza – the hottest, the freshest. To them, once they find it, they’re loyal.”•