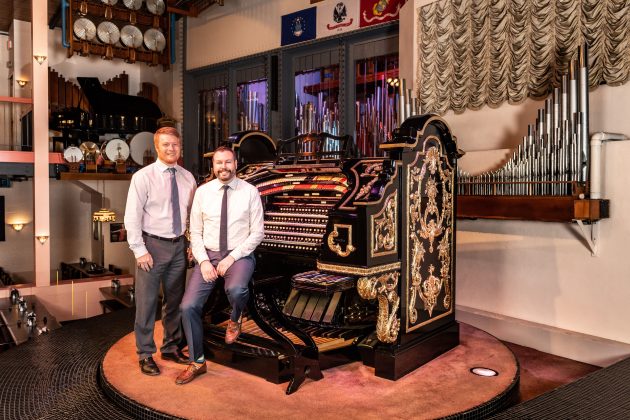 Mesa, Ariz. – In the 1970s and ’80s “pizza and pipes” restaurants were on nearly every corner in the U.S. Fast forward a few decades and today there are only two remaining restaurants in the entire country that provide organ entertainment with a side of pizza – including the oldest establishment of its kind – Organ Stop Pizza in Mesa, Ariz., celebrating 50 years in business this fall.

Originally opened in 1972, Organ Stop Pizza is home to the “Mighty Wurlitzer” the largest and most valuable theatre organ in the world, worth more than $6 million.

Organ Stop Pizza’s Wurlitzer theatre organ was originally built for the Denver Theatre in 1927 where it was used until the early 1930s. With the advent of the talking picture and the Depression, the organ was rarely heard and it was ultimately silenced when a fire in the auditorium caused extensive damage to the organ’s relay.

Today, Organ Stop’s instrument has been embellished from its original state and is now the largest Wurlitzer Theatre Pipe organ ever created. The console, where the musicians sit to play, is an exact replica of a Fox Special console, the largest console ever designed and built by Wurlitzer. Through the years, several rare sets of pipes have been added to the organ, including a massive set of 32-foot wood diaphones, which are visible from the front of the building.

“Our Wurlitzer is a genuine living piece of history,” said Organ Stop Pizza co-owner Jack Barz, who originally worked at the restaurant as a dishwasher before rising through the ranks and eventually buying into the business in 2004. “We are proud to be the home of one of the greatest instruments ever created and our patrons come from across the world to experience this lost art form. Many visitors have even likened their experience to seeing the Grand Canyon for the first time, now that’s a heck of a comparison!”

Each night, Organ Stop’s Mighty Wurlitzer rises above the audience on an 8,000-pound rotating hydraulic elevator to sit 10-feet above the 700-seat dining room. The one-of-a-kind organ has 1,074 individual keys, buttons and switches linked to a series of xylophones, glockenspiels, gongs and cymbals to create the sound of a full-blown orchestra. Nightly shows also include dancing marionette cats, disco balls and spectacular light show.

“The range of emotions our guests experience when they hear the Mighty Wurlitzer are infinite,” Barz added. “In the last 50 years we have had many ups and downs, especially the last couple of years during the pandemic, but when the world feels unpredictable, coming together and hearing music brings people delight and comfort. We are proud to carry on the pizza and pipes tradition and provide escapism for our guests night after night.”

Located in Mesa, the 18,000-square-foot Organ Stop Pizza restaurant was designed specifically to enhance the Wurlitzer’s sound. The building’s 46-foot ceilings provide unparalleled acoustics so the instrument can “speak.”

Each year, Organ Stop Pizza attracts roughly 300,000 annual dinner patrons who enjoy timeless compositions such as “The Flight of the Bumblebee,” “The Hills Are Alive” from The Sound of Music, “The Circle of Life” from The Lion King, the Star Wars opening theme, and of course, “God Bless America.”

“Every visit to Organ Stop Pizza is unique with patrons hand picking the songs via request,” Barz said. “By the end of the night, an eclectic mix of music is enjoyed by audience members ranging in age from two to 102.”

According to Barz, there is practically nothing the Organ Stop Pizza musicians can’t play. “You name it and our amazing organists can play it,” he said. “You will never encounter a more spectacularly talented group of musicians in the world.”