The Atlantic Canada-based Greco Pizza restaurant chain
has chosen to support the cause of organ donations in 2006 and 2007.
Greco is one of Canada’s largest pizza chains with over 160 units, 120
of which are in Atlantic Canada. 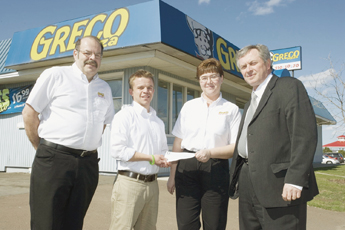 The Atlantic Canada-based Greco Pizza restaurant chain has chosen to support the cause of organ donations in 2006 and 2007. Greco is one of Canada’s largest pizza chains with over 160 units, 120 of which are in Atlantic Canada.

“We believe this cause is an important one,” says Michael Whittaker, president of Grinner’s Food Systems, franchisor of the 160-unit Greco Pizza restaurant chain. “Canada has one of the lowest organ donor rates in the world and it’s primarily as a result of poor public awareness.”

The number of organs donated is not keeping up with the growing demand. It is estimated that over 3,000 Canadians are on waiting lists and over 200 Canadians die each year waiting for an organ to become available.

Mark Black is a Moncton, NB resident and a recipient of a double lung and heart transplant. He is also a regional director for the Canadian Transplant Association.

“A Canadian dies every three days because of the chronic shortage of organs and tissue in this country. I believe people want to help; sometimes they just do not get around to having the conversation. If you want to become an organ donor, signing a donor card is good, but it is more important that you share those wishes with your family. One person can save or improve more than 40 lives through organ donation. Organ donation works. It saves lives. It saved mine,” states Black.

Recently, Greco restaurant owners unanimously agreed that the cause of organ donation would be one that Greco Pizza could bring real value to through Greco’s ability to communicate to the public.

Greco intends to use pizza boxes and promotional flyers to raise awareness of organ donation and to support their fund raising activities.
“We put three million pizza boxes into the hands of our customers deliver seven million flyers to mailboxes every year,” says Whittaker. “That’s ten million opportunities to deliver an important like organ donation. We chose to support organ donation because of the unique fit, our ability to deliver their message and the need for that message to be communicated.”

According to organ transplant associations, the message is twofold. Sign your organ donor card and secondly, just as important, tell your loved ones you wish to be an organ donor. In times of grief it is important to remember the unselfish wishes of your loved one.

Whittaker uses a quote from a current advertising campaign by saying, “What’s in your wallet? There should a signed organ donor card,” he says. Download an organ donor card at www.greco.ca.•