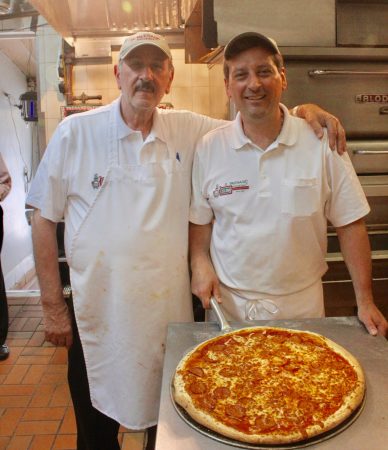 In a nondescript plaza located within Toronto’s west end is a hidden gem for pizza fans. Il Paesano Pizzeria & Restaurant located at Browns Line and Horner Avenue, south of the QEW/427 highway junction, has served this west end neighbourhood for 60 years, making it one of the oldest pizzerias in the Greater Toronto Area.

Over the years, Il Paesano has had several owners. It was originally opened in 1959 by the Mallozzi family, and since 1972 has been owned by the Casale Family. I sat down with Nino Casale to discuss the food and the family behind the restaurant. The location on Browns Line has the restaurant situated between an industrial area and the Alderwood neighbourhood. According to Casale, “We’ve done well here because of the neighbourhood. The people like our pizza and we’ve become a staple of the community.”

The Casale family at Il Paesano consists of brothers Nino and Emilio, and their uncles Alex and Tony. The Casale brothers first opened a pizzeria, Pizza Spot, near Il Paesano. A few years later, the four purchased Il Paesano, where they have been ever since. The goal of the Casale family is to run Il Paesano as smoothly as possible, but as Nino said, “nothing runs smooth.” The family rotates through two shifts: the day shift with Alex, Emilio and Nino and a night shift that is run by Tony.

Il Paesano serves up a full menu in a white tablecloth-lined restaurant while maintaining a very busy delivery and take-out service. With a menu of items such as antipasto, home-made pastas, veal dishes, seafood, sandwiches, panzerotti and pizza, the offerings are quite extensive. Two dishes stand out for Nino: The most popular pizza is pepperoni, mushroom and green pepper.  The gnocchi is another crowd pleaser.

Their thin-crust pizza is a high-demand item the day of our interview. A constant stream of lunchtime customers flow through the location, to take out a slice of pizza or a whole pie. A variety of business lunches are taking place on the Tuesday afternoon, with obviously many regular customers so familiar with the menu that they order as soon as they sit down. Local resident, three-time Stanley Cup champion and current president of the Toronto Maple Leafs Brendan Shanahan has been noted by Casale as a fan of the restaurant and especially its gnocchi.

Advertising is key to Il Paesano’s success. Flyers are their advertising model, Casale said. “We’re a little old school: our customers like to hold our advertisement.” He also said that advertising through web platforms and social media is the new way of the industry, and Il Paesano will be moving towards that model shortly. Word of mouth and longtime customers’ referrals also serve as important advertisers for Il Paesano. Casale mentioned a customer who has moved north of Toronto and still visits weekly to pick up a pizza.

Reflecting on long-term success in the pizza industry, Casale said that a great product and great service are what keep and maintain customers. Product and service are key to a successful business. That means ensuring that each product remains consistent from day to day and that the product is served up quickly to the customer.

With regards to quality service, Casale said, “When someone is hungry, they don’t want to wait.  The quicker we can get something to them, the better it is.” This was one of the reasons Il Paesano switched from a traditional stone pizza oven to a conveyer oven, which cooks the pizza in six minutes. The change enabled them to deliver a pizza in a 15- to 20-minute window.  This switch in technology helped increase their business because customers don’t want to wait. According to Casale, “customers are often surprised by how quickly they receive their pizza.” Il Paesano prides itself on its delivery drivers, who know the area and can deliver a pizza safely and efficiently.

STORAGE AT A PREMIUM

As for maintaining a quality product, the key to an Il Paesano pizza is the use of fresh ingredients. Their sauces and dough are made daily on site. Genuine milk products and fresh produce are essential to their operation. The pizzeria uses tomatoes imported directly from Italy for a sweeter taste in comparison to a Canadian tomato.

However, this is also one of Il Paesano’s challenges. The restaurant is small and the storage of produce can be tricky. When asked about adding new toppings to the menu, Casale said this can sometimes cause debates among his family members because they need to consider their limited space for storage and on the pizza-making counter.

Many pizzerias face the challenge of retaining staff, and Il Paesano is no exception. The staff at Il Paesano are relatively young and work at the pizzeria while in school. In many ways the pizzeria has served as a training ground for future employment. “We’re always training new staff. We treat our staff with respect and do everything we can to help keep them around,” Casale said.

From 1993 until 2003, Il Paesano had a second store in Mississauga with what they hoped would be the first of a franchised expansion. After jumping through the many hoops involved in the franchising process, another planned Mississauga store resulted in a year-long licensing agreement. With the franchising attempt, it became too much work to maintain high standards of quality and service at two locations, so the second location was sold. Since quality and service are fundamental keys to the operation, Il Paesano has concentrated its operation upon a single store since its first attempt to expand.

Il Paesano is a 60-year story of family, service and quality. Each of these ingredients, combined with the experience and lessons learned from running a pizzeria, has contributed to its long-term success.

Il Paesano, or Il Pae, as it’s affectionately known to fans, continues to serve up flavourful dishes and pizzas, seven days a week to Toronto’s west end and Mississauga.

Alexander Hughes is a PhD candidate at York University in Toronto studying the history of pizza in Toronto and Buffalo, New York. Find him online @PizzaHistorian.