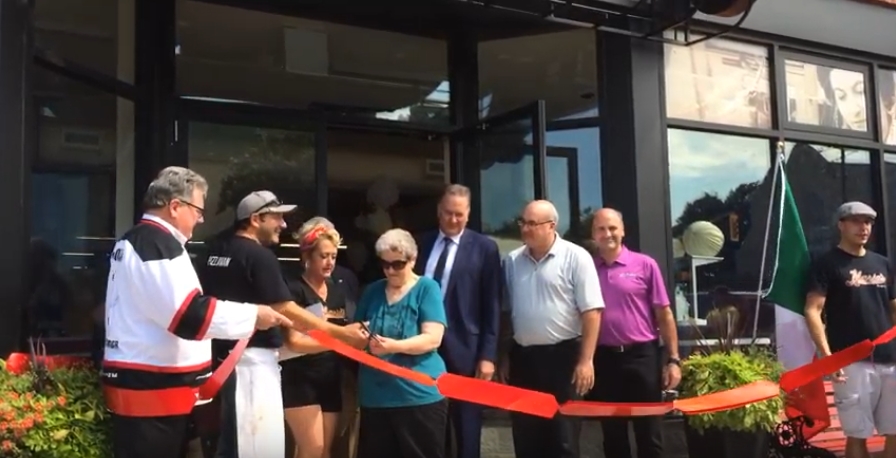 Brantford, Ont. – The owners of Maria’s Pizza in Brantford, Ont., showed off their newly rebuilt pizzeria during a grand reopening that included special golden tickets for pizza throughout the day and a heartfelt thanks to their staff and the community that stood by them after fire destroyed the pizzeria two years ago.

Family, friends, staff, and the tradespeople who helped rebuild the 50-year-old business came out to celebrate the restaurant’s reopening.

Gino and Bobbie-Sue Risi have owned the pizzeria for the last five years. Maria’s Pizza was started Gino’s parents, Maria and Virgilio Risi, in 1968.

The current owners re-installed the Garland gas deck ovens they’ve had for 28 years in order to re-create the taste of their signature pizza.

During Maria’s “soft” opening on June 2, they posted on Facebook they’d be selling 100 pizzas on a first come, first served basis. Due to high demand, they ended up selling more than 350 pies in an afternoon.

Their marketing strategy this time was to sell “golden” tickets last week for a large half Canadian for $10. The tickets instruct customers to come during specific time periods throughout the day.

Paul McCaig, president of Paulsan Construction, the company that rebuilt the restaurant, said the process took about 10 months. “The Risi family wanted to keep the original feel but we’ve added modern conveniences, McCaig said. “This is a nice project for our resumé.”

Tom Campbell, the city inspector who worked on the project, said that as a regular customer it was nice to be a part of the process of the restaurant’s return.

City councillor Josh Wall also was pleased to see the business reopen. “Maria’s had no obligation to rebuild in the same location after the fire. We’re very thankful they did.”