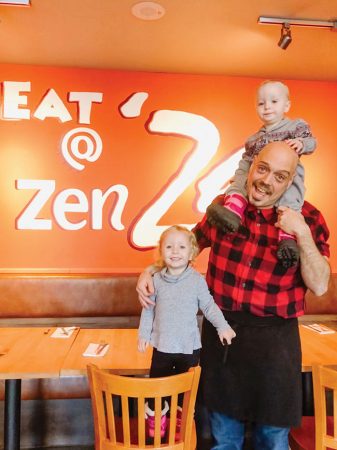 As we all know, the universe had other plans. Like many in this industry, Timothy had the rug pulled out from under him by the COVID-19 pandemic. “I had got to the 15-day countdown when the pandemic hit,” he says.

Not only were his plans for world domination in box folding put on hold, but he was temporarily sidelined from the beloved shop where he works as a server – Zen’Za Pizzeria in London, Ont.

Even after two months, he still finds it all hard to believe. “Vegas – it was gonna happen! And we had just moved into number 1 category on Trip Advisor in London,” says Timothy, who turned 40 in April.

Zen’Za re-adjusted to takeout and then was able to shift gears into ready-made, vacuum-packed pizza production.

However, it’s meant the very sociable Timothy has had to stay home temporarily, while owners Wayne and Jocelyn de Groot pump out the pizzas, which are sold at retail, he says.

When we spoke, he was enjoying being primary caregiver for their children, Grace, 4, and Finn, 2, giving his wife, Sarah, a teacher, more distraction-free time to help her students with electronic learning.

Timothy, who hails from Somerset, England, has about 20 years of cooking and serving experience under his belt. “My father had a pub and I worked there and in many different places,” he says. “I’m used to working with my family. That’s why it’s nice working with Wayne and Jocelyn.”

Z’Energy days
He has worked for Zen’Za for about two years. He started working mornings in the Z’Energy Day Café, a health-focused project that eventually morphed into Zen’Za Pizzeria. “I would work from 9 to 12, then Zen’Za came on at noon. For a few hours in the morning it was oat-milk based coffee and avocado toast. In England I often did a morning shift – like a highly trained barista.”

At lunchtime, Timothy would switch hats to server. He was also in charge of the Zenergy Day Café Instagram page, from which he ran more than 100 episodes of popular cooking show “The Zenergy.” It featured signature dishes – with a side of hamming it up. “I like the dopamine fix,” he says. “I get 50 likes in a matter of seconds.”

The café served its purpose of raising awareness of the Zen’Za brand. They gradually changed to an 11 a.m. start and Timothy began working the day shift. They still do the avocado toast for the brunch.

After living in Canada for several years, he’s learned to appreciate certain things about the Canadian restaurant-going public. In particular, tipping, which was something of a novel concept. “In England, to get a tip, you really have to go above and beyond,” he says. “Here, people want to give you money just to help you out. It’s a level of compassion.” 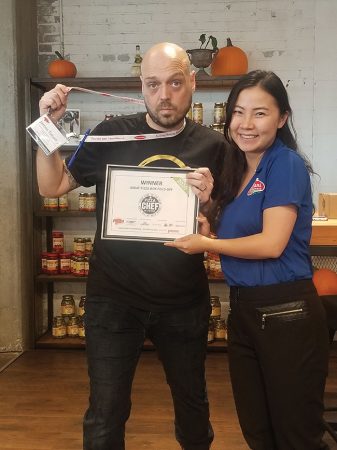 Showmanship
An unexpected combination of showmanship and humility, Timothy likes to use his box-folding platform to promote Zen’Za. “Anything I can do to bring attention to them, I’m happy to do,” he says. “Wayne can talk to for hours about fermentation. But boxes – that’s my thing.”

“At first it was just a bit of fun,” he says. “I’m folding these boxes on a daily basis, so it made sense for me to represent Zen’Za in Toronto,” Timothy says.

After pulling off the fastest time and experiencing the rush of a crowd watching, he was hooked. “It spurred me that first year. I came home with the certificate and two jars of sauce and that was it!”

He shifted gears to train for Vegas Expo, which requires competitors to fold five small boxes, a different format from the Canadian fold-off, which requires competitors to fold 10 large boxes. “I was looking at all of some of the previous winners – and they were about 20 seconds for five boxes,” he says. “My technique started to change. With 10 boxes, you can afford to stumble a couple of times. With five there is no room for stumbling.”

The city of London rallied around him: a GoFundMe campaign raised $1,000 in short order and the London International Airport bought flights for him and Wayne. He is humbled – amazed, in fact – by the enthusiastic response.

“People would come into Zen’Za, hand me a $20 and say, “You the box guy? Go get ’em!’ Everyone has shown so much love and support,” Timothy says.

Secret is technique
Besides having lots of boxes to practise with, what’s the secret to his supersonic skills?

“The secret is the technique,” he says. “There’s only one way it will go together fast. You can’t do step 3 before step 2. You’re really looking to put in maximum effort for a short time. With 10 boxes I could build to speed. But with five, it’s all over in 20 seconds. I did loads of 25 and 26 seconds – respectably fast. I even did a 19-second time. But it’s all in the technique, that flappy-flap-fold thing that I do.”

As an added touch, the folding champ now draws on the boxes. “I do Mandalorians and Baby Yodas,” he says. “I’m not a great artist but I can do quick scribbles. It’s a very small and local thing. But people seem to like it.”