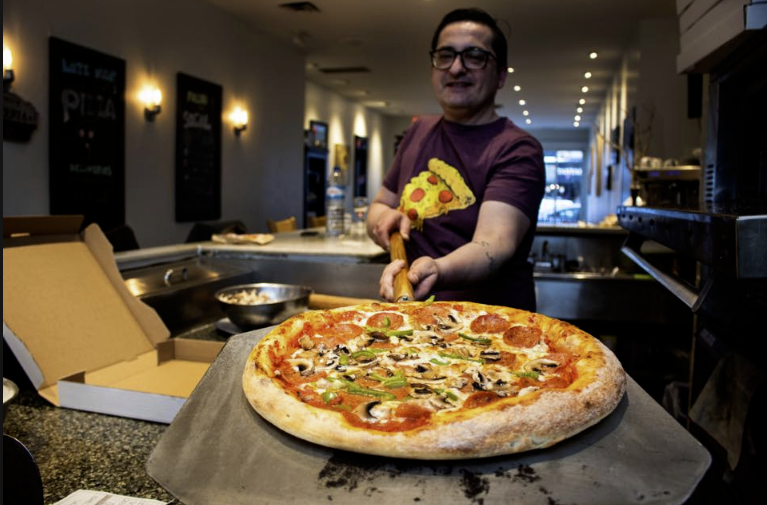 Since the beginning of the pandemic, Frank’s Pizza House in Toronto has been feeding those who can’t afford to pay and, with the help of neighbourhood donors.

“Every day people are taking us upon the offer,” owner Giorgio Taverniti said. “People tried to give us money. One gentleman gave a big donation, and we used it for a fund to help people.” The initiative is named the Taverniti set up the Oakwood Fund, named for a neighbourhood street, and posted the news on Facebook. It’s been going since March, and people are still contributing.

“People tell us what they want and arrange a pickup time,” he said, adding they’ve served people on disability and in all kinds of situations. Some recipients tried to justify why they needed the food, he said. “We did a special post on Instagram saying ‘you don’t have to explain yourselves!’ ”

When Canadian Pizza spoke with Taverniti in late May, he said he and neighbourhood organizers were in the process of helping to organize a walk to honour Capt. Jenn Casey, the Snowbirds member who died in a tragic crash in May. They were donating pizzas to the walkers, he said.

At the height of the crisis, Frank’s also provided pizza to area hospitals to treat doctors, nurses and medical staff.

And for keen bakers, he’s been giving away yeast, and sharing tips on using it from fellow operator Diana Cline.

Taverniti, who is very active on social media, used another tried-and-true method to get the word out about their activities. He had about 1,000 double-sided business cards made up and sent them out with every order including their pizza kits.

People got the message and wanted to help. “I got calls from other people saying it was great to do that – how could they help?” he said. “People offered to deliver for me for free if I got into a jam. One guy offered to make a special TikTok video – he will come to Toronto to do it later. Another guy, a computer programmer, offered his services. We had all these offers.”

For those interested – and we know there are many, many pizzerias making do-it-yourself kits – Frank’s pizza kits include three doughs, sauce, pepperoni and cheese, and are sold for $19.95. “We’ve been selling for a few years but they are doing really well right now. “Sometimes people who buy the kits call and ask me what to do.”

He is grateful for help from donors but will continue efforts to support the community even if donations run out.

Encouragingly, Frank’s is seeing a lot of new customers. “The question is, how do you retain those customers?” Taverniti said.