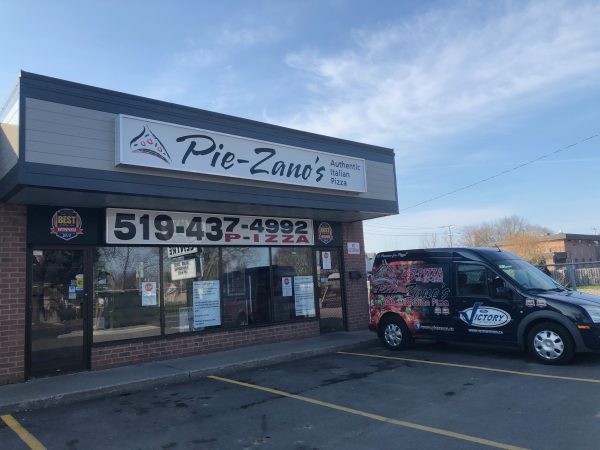 Pie-Zano’s Authentic Italian Pizza has been part of the Chatham, Ont., neighbourhood for a decade. Photo: Pie-Zano's Pizza

On Sunday, March 15, Paul Mollica and Joe Leggiero, co-owners of Pie-Zano’s Authentic Italian Pizza in Chatham, Ont., made the difficult decision to close the pizzeria’s doors temporarily to ride out the COVID-19 pandemic.

Primarily a takeout and delivery business, Pie-Zano’s, which has been in business for nearly 10 years, could have stayed open. Mollica and Leggiero decided to close temporarily to be on the safe side, as Mollica has underlying medical conditions.

When the Ontario premier announced schools would not reopen after the break, and with one of the largest high schools across the street and students a big percentage of their customers, it made sense to close. “It was one thing after another,” Mollica said.

Pie-Zano’s normally would have a staff of eight to 10 on weekends and help from his wife, Linda, and other family members. Because the shop is only about 900 square feet, social distancing would have been impossible.

Warnings from relatives in hard-hit Italy made them certain their decision was the right one. “Our relatives told us everybody took it lightly in Italy, at first. And they love to eat out and be with friends. Everyone thought it was a bit of a joke. They told us to take it seriously.”

The pizzeria has shut down only two weeks in total since opening 10 years ago, Mollica said. When it did, they were left with a houseful of dough. “We had just received a couple big orders, gearing up for students to come back from their March break. We had 100 doughs already made up, the cheese already shredded.” 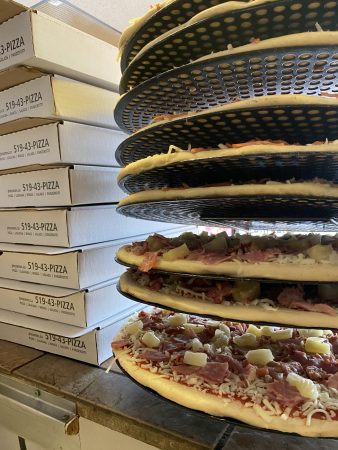 When the pandemic hit, Pie-Zano’s turned 100 leftover doughs into pizza and put a smile on the face of nearby hospital workers. Photo: Pie-Zano’s Pizza

So, they made lemonade out of lemons. “We thought, let’s give them to the hospital staff next door and first responders,” Mollica said.

They used all of the product they had in stock to make about 100 pizzas to give to local police officers, firefighters, paramedics and staff at the Chatham-Kent Health Alliance practically next door to them.

Hospital executives picked up the pizzas for the hospital and a friend helped them get pizzas to the fire department and other places.

The delivery brought a few tears to the eyes of the front-line workers. “Everybody called to thank us and sent letters. It was nice.”

But that’s not what motivates them. “We work hard, we’ve got a good business going and we were happy to give back,” Mollica said. “The really nice thing is that other pizzerias in the area followed suit. We’re all competitors, but we respect them.”

And there’s enough business for everyone, he added.

Mollica, who grew up in Windsor, Ont., was in food service with a small wholesaler, for over 30 years. He got to see pizzerias close up, liked the business and asked a good friend to teach him how to make pizza. From there the business grew to become part of the community, sponsoring hockey and soccer teams. “We’ll miss that this summer,” he said.

Update: Pie-Zano’s has since reopened for pickup and delivery with reduced hours and lots of safety and physical distancing measures in place. There will be one door for customers only and one door for drivers, he said, and plastic shields to protect customers and staff.