Canadian pizza chefs are pushing the boundaries of colour, flavour and grains 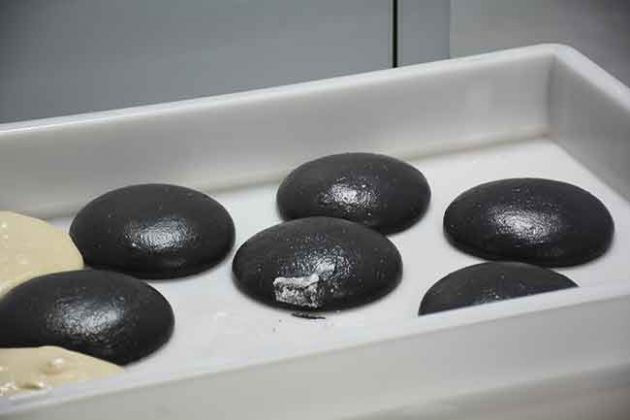 Pizza dough made from food-grade activated charcoal was a highlight of the School of Italian Pizza’s traditional pizza class in November in Toronto. Pizza chefs Tony Vacchio and Kyle Rindinella also have explored black-crust pizza – though Rindinella used squid ink to achieve the effect.

Innovative pizza chefs across Canada are letting their creativity shine as they experiment with colour-enhancing ingredients, nutrient-packed seeds, flavourful herbs and flour born of ancient grains.

From pizza dough made with an einkorn flour-maple syrup biga to onyx black and rosemary-adorned crusts, Canada’s pizzaiolos are adding ancient grains, seeds and colour to their eye-popping inventions.

Giuseppe Cortinovis, runner-up in the Canadian Pizza Chef of the Year open competition in October, is passionate about pizza and the possibilities it holds. His background in baking led him to create a one-of-a-kind dough that pays homage to both his native Italy, where his bakery is still in operation, and Canada, where he is lead pizza chef at Trattoria in Vancouver. Using an einkorn flour and maple syrup biga, Cortinovis created the “Vegetarian G-Style” pizza for Canadian Pizza’s Chef of the Year contest.  “I put the maple syrup to connect the two nations. Einkorn flour is for the Roman Empire and maple syrup for the speciality in Canada,” Cortinovis explains.

In his first attempt, the low gluten content in einkorn flour proved to be a challenge. However, the second time around Cortinovis replaced 50 per cent of the einkorn flour with strong flour and the result was exactly what he was looking for. Once mixed, the biga sits at room temperature for 24 hours while the fermentation process takes place, creating yeast that is then incorporated into the actual pizza dough. “I take the biga and I use the yeast in the real dough, which is 40 per cent semolina flour, 60 per cent 00 flour, water and salt. It’s a long fermentation [another 36 hours to be exact], so it’s super digestible.”

Cortinovis also adds flax seeds (20 grams per kilo) to the dough for an added crunch. Topped with spicy peperonata; Taleggio cheese, made near his hometown of San Pellegrino Terme in Italy; sunflower seeds; pine nuts; freshly chopped arugula; figs and vincotto (think balsamic vinaigrette but sweeter) – the Vegetarian G-Style pizza is intended to be a flavour explosion. “The salty part from the cheese, the bitter part from the arugula, the sweetness from the vincotto; my idea was to put together a combination of all these tastes. . . . It’s a vision of a modern vegetarian pizza. It’s very tasty and also very healthy.”

Cortinovis’ easily digestible pizza packed with nutrient-dense seeds and ancient flour is an important trend in current consumer attitudes and buying patterns. A Packaged Facts consumer research study released in August 2015 found that ancient grains, sprouted ingredients, and seeds and nuts are experiencing greater attention from U.S. consumers as these products “move from the natural and organic channel into conventional supermarkets and mass merchandise stores.” The report goes on to note that “sharing the limelight with ancient grains for consumer attention are sprouted grains, seeds and nuts, promising ease of digestibility and enhanced nutritional value in terms of protein, amino acids and micronutrients.”

Canadian pizza chefs are certainly paying attention when it comes to consumer demand for offerings that pack a nutritional punch. “I really believe the future of pizza is like the one I’m making. With 00 flour you refine the grain to get the 00 so thin that you lose all the properties of the grain. It’s more like starch and sugar. . . . I’d rather give people an option that’s very healthy and interesting,” Cortinovis says.

Innovation in pizza dough has the ability to ignite our most powerful senses: taste, touch, smell and sight. Tony Vacchio, lovingly known as Chef “T” by his staff, is the owner of Zolas Restaurant in Ottawa. When it opened its doors 29 years ago, Vacchio says it was the first Italian restaurant in Ottawa’s west end to have an exhibition style/open kitchen concept.

When it comes to customer favourites, Zolas’ loyal clientele have made “Zolas Signature Rosemary Crust” pizza the most popular pizza item on the menu. The pizza, another entry in the competition, features fresh rosemary needles pinched into the crust, bursting forth flavour and fragrance after cooking. The pizza is topped with fresh baby spinach, kalamata olives, red peppers, pancetta and smoked mozzarella. “It’s very well received. All your senses come alive: the visual, the smell, you can almost taste it before you put it in your mouth,” Vacchio explains.

For greater visual appeal Vacchio artistically pinches the rosemary needles around the dough once it’s stretched and formed in the pan, rather than incorporating them throughout the dough. The idea for the pizza came from Zolas’ homemade focaccia, which is smothered in olive oil, garlic and fresh rosemary. Vacchio had to try the mouth-watering combination with pizza. His one caution to those wanting to incorporate rosemary into their pizza dough: “Make sure the rosemary needles are fresh, because they are woody and if it’s not fresh then it will tend to burn.”

Another pizza trend that has grabbed Vacchio’s attention is black dough. While this can be achieved through squid ink, as seen with some pasta dishes, it’s a food-grade, activated charcoal powder that has intrigued him. With a long history of medicinal uses, including as an emergency antidote for poisoning or pharmaceutical overdose, a teeth whitener, and a general detoxifier, food-grade activated charcoal can also be used in baked breads, cakes and pizza dough to turn the product black without affecting taste or texture.

Pizza dough made from food-grade activated charcoal was a highlight of the School of Italian Pizza’s traditional pizza class in November in Toronto. Pizza chefs Tony Vacchio and Kyle Rindinella also have explored black-crust pizza – though Rindinella used squid ink to achieve the effect.

“I have used squid ink before as we do make fresh pasta daily, but some people have allergies to seafood so I searched for an alternative. I first thought about the idea with Halloween around the corner but found it hard to find in Ottawa. It would be an interesting conversation item for customers, with the dough’s canvas being jet black. Imagine the colour contrast with mozzarella and red peppers,” Vacchio says.

When inspiration and passion combine, innovation is born. Vacchio attributes his inspiration to his family’s roots in Naples and his mother’s passion for making Italian favourites, like pasta and pizzas, from scratch.

Kyle Rindinella, chef di cucina at Pizzeria Libretto’s Danforth Avenue location in Toronto, turned his intrigue of black pizza dough into a reality with his Chef of the Year entry, “The Rindinella.” The entry featured classic Neapolitan dough with a hydration rate of 60 per cent, turned dark black. He replaced approximately 20 to 30 grams of water with black squid ink, just enough to achieve the midnight black palette he was after without altering the flavour of the dough. The pizza was topped with tomato sauce, tuna confited in olive oil, black olives, preserved tomatoes, shaved bonito flakes and parsley.  The creation is an ode to his family’s Sicilian roots. “When I think about Sicily, the first thing that comes to my mind is fish, a lot of bright sunshine and a little bit of heat,” Rindinella explains.

Reviews from industry friends were positive. “They enjoyed it. I mean, at first it was a little shocking to people – even my kitchen team was a little taken aback – but it was enjoyed. It was more so just for something different.”

Another dough trend Rindinella is currently exploring is the use of various flours. With ancient grains top of mind among consumers, innovations in this area are in demand. “I’ve noticed a few ‘more than normal’ calls [in the restaurant] for different types of dough. Not necessarily for gluten-free dough, but asking if we make rye dough or spelt dough,” Rindinella says.

As deep passion and unbounded creativity unite among Canada’s talented pizzaiolos, they are making big leaps in the name of innovation. With seemingly endless areas ripe for exploring, Vacchio reminds us that innovative does not have to mean complicated. “Food costs are expensive, but you don’t have to load tons of stuff on a pizza. Simple is always best and you can make innovative pizzas with simple toppings.”

Julie Fitz-Gerald is a freelance writer and regular contributor to Canadian Pizza magazine.
Print this page