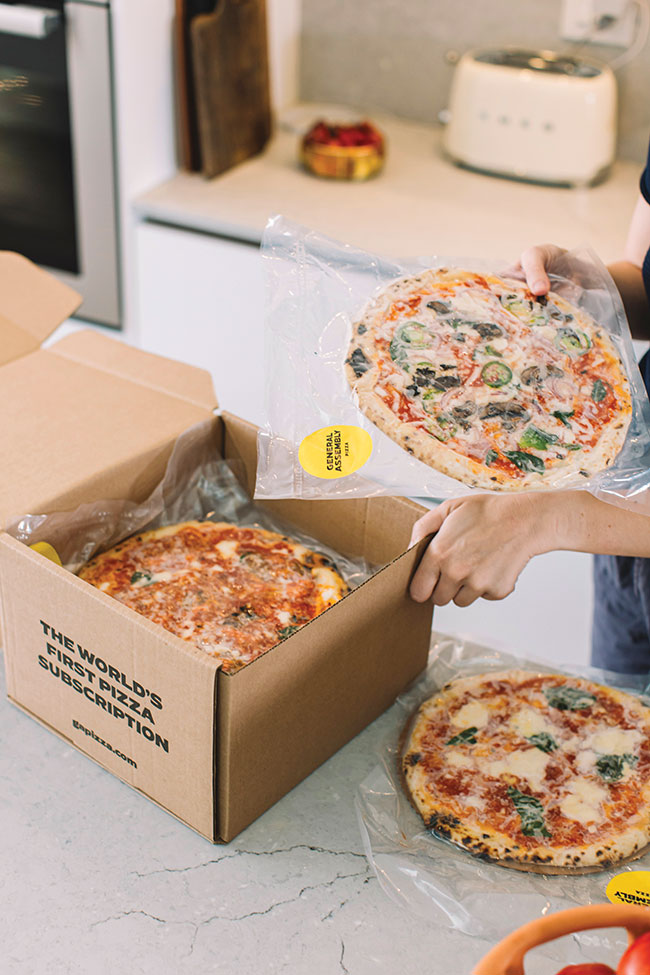 Ali Khan Lalani wants to stir things up in the pizza industry.

The affable founder and CEO of General Assembly Pizza in Toronto, sees himself as no fan of the status quo: “As GA’s founder, my goals are to disrupt the pizza industry as we know it and to help lead the quality pizza movement.”

Like a top chess player seeing several steps ahead, Lalani has the gift of harnessing the right trend at the right time. He is steering his pizza brand ahead of the curve in a competitive industry during a brutally challenging year – a feat he and his team have accomplished through a series of smart pivots.

To appreciate the journey he has taken, you need to understand how he made the leap from owning a pair of Swiss Chalet locations to opening a bricks-and-mortar pizzeria to selling meal kits to getting frozen pizzas into grocery stores to his newest innovation – offering stacks of pizza by subscription.

Lalani’s childhood was spent in Kitchener-Waterloo, Ont., until age 9, and Vancouver. His path through the restaurant business began with several years at a Vancouver Earls restaurant as a high school student. After graduating with a bachelor of arts in political science from Concordia University in Montreal, he entered the restaurant business. At age 26, he became a franchise owner at Swiss Chalet at a location in Guelph, Ont. This early success led him to take on a second location in Woodstock. The two locations became examples of best practices for the corporate office and, before long, he was advising on national Swiss Chalet media campaigns, and new restaurant and menu designs.

“I completely and thoroughly enjoyed experience at Swiss Chalet,” he says. In those years, from 2009 to 2015, about 70 per cent of sales was generated in the dining room with delivery and takeout a smaller but growing part of the business. Then there was a huge shift toward delivery, takeout and off-premises eating.

Lalani took note of this trend and decided to try something new.

He has three huge passions in life – the restaurant business, pizza and wine. “I thought, there’s got to be a way I can marry the three of those.”

After backpacking around Europe, he found himself in Naples waiting for a ferry. He spotted a pizzeria that had a huge lineup. Curious, he joined the throng of people, ordered a margherita and a marinara made in a wood-fired oven and fell in love with Neapolitan pizza. It was an a-ha moment for the budding entrepreneur. “It changed my life.”

He did more travelling in Italy and set out to learn as much as he could about traditional methods – by doing. In 2016 he trained in California and became an Associazione verace pizza napoletana (APN)-certified pizzaiolo and a Level 2 Certified Sommelier in order to understand how acid and sugar react with food and how different flavours and combinations react with each other. 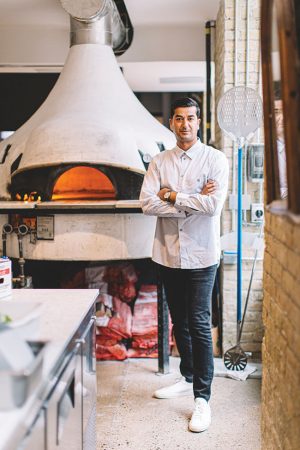 CEO and founder Ali Khan Lalani is steering the General Assembly Pizza brand ahead of the curve in a competitive industry during a brutally challenging year.

In 2017, General Assembly Pizza opened its flagship restaurant at 331 Adelaide St. W. in Toronto’s King West Entertainment District. It is a 3500-square-foot fast-casual restaurant that seats about 75 diners.

A much smaller connected space next door was purpose-built for take-out orders, pick-ups by Ritual customers and Foodora deliveries.

“Fast-casual was just getting going,” he says. “I thought, let’s bring the art of theatre into this restaurant.” This pizza theatre included a kitchen with no walls visible to the public. At the time the courier business was booming, and he had separate entrances built for the 500-square-foot take-out area. “We built a shelf for orders and customers could order using an app. Looking back, it was innovative.”

They launched cashless payment and received great “organic press” from Toronto media, landing on several “best pizza” lists. “We were fortunate,” he says.

The name is a nod to the industrial revolution (think “General Motors”) and the assembly-line nature of the operation, a mixture of old and new, with Neapolitan pizza going into old-style oven handmade in Naples. “Assembly” refers to the idea of gathering (think of school assemblies you attended as a kid). Lalani’s goal is to bring all pizza lovers to one place, a hub, to share an hour together. “It’s an homage to tradition but bringing people all together at once,” he says.

‘More than a restaurant’

Lalani refers to the business as more than a restaurant. “I feel like General Assembly evolved into a lifestyle. It was fast-casual and really easy to navigate for everyone – for families, first dates, tourists . . . an easy, familiar place. Pizza nerds were interested in our dough and the oven. It became this place where people would break bread. We became a community instead of a restaurant. Our customers and staff gave it its energy and soul.”

He says all shops have dough, sauce, toppings and other common elements of pizza, but building a brand has to do with how you look at these elements and the revenue opportunities you see.

The concept that helps General Assembly stand out is individual, 10-inch pizzas at price points of $9-15. “We thought, it’s so nice to have a size of pizza that’s built for one, an easy size to navigate through and keep our price per pizza palatable,” Lalani says. “You don’t have to share – there’s no compromise.”

From pizza kits to frozen

That was all before COVID-19. The sunny entrepreneur manages to keep his note of positivity while telling GA’s COVID story.

“The plan this year was to have three locations in high-traffic areas,” he says, with a rueful smile heard over the phone. “Everything was going fine until March 13. We had to close. We wondered, what’s going to happen next?”

Lalani and his team, which includes executive chef Curt Martin, set about problem-solving. “We thought, there must be a way to get our pizza into the hands of our consumers in a safe way.” They launched a pizza kit business and marketed it through social media. Martin filmed videos and shared them online. “It took off. We sold 300 the first week, then 500 a week. “Sharing stories, sharing videos – we started going down that path,” Lalani says.

“I had always dreamt of making a better frozen pizza,” Lalani says. The team spent about 10 days innovating and testing and, by April 15, they had a few pizzas they were happy with.

They moved cautiously, believing “too much new” might be overwhelming for customers. “There needs to be a level of comfort,” he says. “We wanted to create something familiar, quick – a treat. We sold them just at our restaurant and they started flying out of the door.”

The next steps happened fast. Two weeks later they were approached by a grocery store, and by June 1, General Assembly pizzas were being sold in more than 15 independent grocery stores in southern Ontario such as Summerhill Market. As of late October, they were in 25 stores.

“We wanted to carry the idea of no compromise to the CPG (consumer packaged goods) shelf for grocery and subscriptions,” he says. “We always wanted to figure it out in house. We wanted to work with people who believe in our food. Independent grocers are just like us restaurateurs. We ask them, ‘What are you carrying now? Is it working?’ We ask them to try our pizzas to see if they like them.”

Given the tense shared history of fresh and frozen pizza in Canada, GA’s move into frozen might seem like an ironic disruption of the frozen pizza market. Lalani thinks of it as harnessing the frozen model for the independent pizzeria’s own success.

And a success it is. The premium pizza kit and frozen pizza consumer packaged goods line is on target to hit $750,000 in sales in the first 12 months. 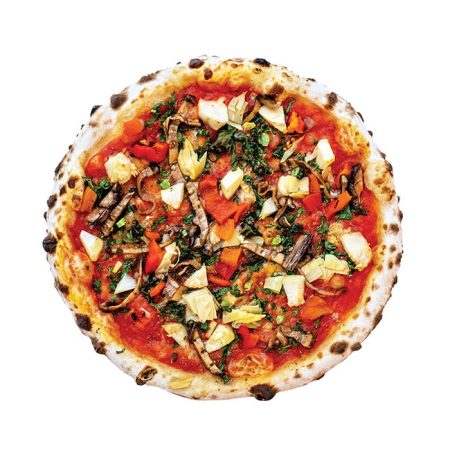 Clearly 2020 has been an extraordinary year of pivots and partnerships, and, as fall approached, the wheels kept turning. The weather cooled and students returned to school. “We thought there’s got to be another way to get pizzas to people’s homes,” Lalani said.

With many customers reluctant to dine inside restaurants, he noticed third-party delivery services and home-delivered meal kits were “blowing up.”

A fan of some of these services, he saw an opportunity. “I sat down with my wife and daughter and said, ‘Imagine if we had a pizza business based on this model.’ They said yes.” The GA team were also on board with the idea. “I thought we could do it in a week – that’s the world I live in,” he says with a laugh at his underestimation. In reality, this feat of custom e-commerce technology and packaging took five months and a lot of work.

“On Sept. 15 we let it go and our little baby entered the market,” he says, still marvelling at the path 2020 has taken him down.

They sold almost 500 subscriptions the first month, more than 1,000 the second month to customers in Toronto’s downtown and North York areas.

How does it work?

A pizza subscription offers free home delivery for stacks of four, six, eight or 10 pizzas, from $39 per order and as low as $9 per pizza. The direct-to-consumer service was first available in Toronto and in early December expanded to several cities in the surrounding Greater Toronto Area. Subscriptions are available exclusively through gapizzaclub.com.

The idea is to “Set it and forget it. Subscribers choose their monthly “stack size” and select their pizzas. They can change, pause or cancel their subscription any time. Delivery is available across Toronto, to all postal codes beginning with an ‘M’ or ‘L’, and is free for subscribers within the store’s delivery zone.

Subscription service features six pizzas customers can cook at home in five to seven minutes in a conventional oven or grilled on a barbecue.

“Food quality and forward thinking is what drives our team,” Lalani says. “Whether it’s made-to-order or frozen, our pizza is entirely handmade, chef-prepped and fired in our hand-built, made-in-Italy brick
ovens.”

Technology has played a big role in the brand’s growth and flexibility, and Lalani encourages other pizzerias to embrace it without fear. “A lot of that can be done without a lot of “hard resources,” he says.

Lalani is now focused on building a 500-square-foot non-dining hub where people can buy frozen pizzas, dough, sauce, cheese, and, of course, hot pizzas for delivery. “Now, more than ever, the traditional revenue stream is gone – it was flipped on its head this year,” he says.

“Try to find something every day to make better – that’s our modus operandi. We’re still doing a lot of learning. We want to make sure we’re turning that learning into a robust experience for customers.”